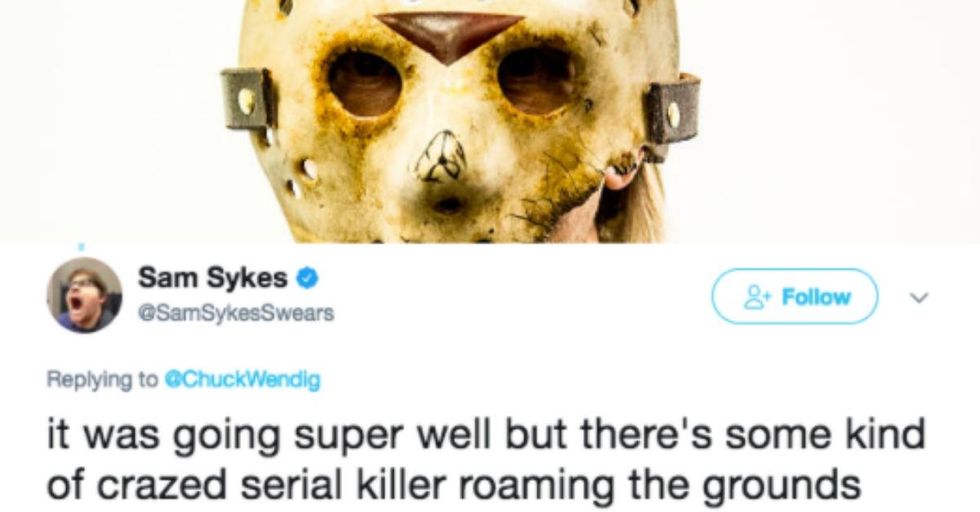 This Twitter Conversation Accidentally Turned Into the Weirdest Horror Story EVER

It was a dark and stormy night. Blood dripped from Jason Voorhees' hands as he poured himself a glass of wine. He lifted it up to take a sip but then remembered he was wearing a hockey mask. "Silly Jason," he said as he shook his head and chuckled to himself. "What a goof."

No sympathy for Jason's plight? You're not on the side of the murderous monster from Friday the 13th? Well, this hysterical Twitter thread from two authors, @ChuckWendig and @SamSykes, might change your mind.

Their epic exchange from July 27 plays with all your favorite horror movie tropes and somehow turns a Jason-like camp killer into a sweet misunderstood guy just trying to get through life. Read the whole thing. It's worth it.

Sam asks his friend Chuck for some help. Innocent enough.
Like a good friend, he's there for him.
Big news, big news.
So far, this is all above board. But it's about to get crazy.
Of course there is. You can't have camp without a crazed serial killer.
Chuck seems mighty calm about the whole thing. One wonders how planned out this exchange was. Did Sam warn Chuck about the direction of the convo, or did Chuck just naturally know where it was going?
"They're all dead." What a summer, am I right?
Gotta ask. If you don't know who the killer is, it could be you.
But how do you know if you're the killer? Good thing Chuck is here to help.
Step 1: Blood. Is it all over your body?
Oof, strike one. Not looking good.
Step 2: Blood. Whose is it?
How can you tell if it's your blood? Well, does it taste like you?
Oh, this makes much more sense. Step 3: Blood. Is it coming out of your body?
If you answered "Yes," to Step 3, fashion a tourniquet out of the nearest bed sheet to stop the bleeding. If you answered "No," to Step 3, keep reading.
Step 4: Weapon. You holding one?
Sam brings up a very good point. Different tools can be considered weapons or not weapons in different contexts.
But Chuck is right. A machete is a weapon in this context. Step 5: Creepy mask?
Again, Sam hits back with the pertinent questions. How do you know if a mask is creepy or not?
Chuck isn't fazed though. Chuck is an expert.
-Funeral director -Birthday clown -President of the United States
Oh yeah, these are good ones too. But let's not stray from the point...
Sam is totally wearing a mask. But is it a creepy mask?
The only way to know the answer is for Sam to describe the kind of mask he's wearing.
Ooh yeah, buddy. This could be a problem.
Chuck knows that type of mask fits securely in the "creepy" category.
But Sam's right. He didn't ask Chuck's advice just to get judged. That's not what friends do.
Chuck was a real mensch and hit the Googs.
For a serial killer, though, Sam is pretty inexperienced. Next time he takes on such a big task, maybe he should research it first.
If you are a serial killer though, there's good news and bad news. Luckily, Chuck is a straight shooter.
There's no easy way to say that the killer doesn't make it "moooooost of the time."
Admit it. You feel bad for the serial killer.
Traditionally speaking, the killer's just not going to survive. But there's still some good news.
More chances to kill! But dude, there's also bad news.
"Emotional rollercoaster" is an understatement. I'm really rooting for this killer guy.
But in the end, he's probably going to die. Unless he takes up something else.
Which he could, but he's in the woods. That limits his options.
An arcade would be good. There, you can kill people, but they're fake people inside a game, so it's totally legal.
But if he stays in the woods, the last live one will probably end him.
"Total cone of silence" = The vast expanse of Twitter
Call me crazy. But I think this serial killer is overthinking things.
"Real talk time." Is the evil mask making Sam do evil things?
Not if he agrees with the evil mask!
I guess it's nice that the killer and the mask get along so well. It's hard to find true friends in this world.
When you find someone you connect with, you have to hold on to that relationship.
But we're getting off track. Where did this mask come from?
I think the lesson here is that if you see a clearly mutilated corpse lying on the ground, pick up the mask it's holding! The mask could turn out to be your soulmate. You never know.
At the very least, even if it didn't turn into a mutually beneficial murder spree relationship, you'd have a good story out of it.
Now Chuck is egging on Killer Sam! Can't blame him. He's been helping him out this whole time.
"Hypothetically" always means, "I already did it and I think that's probably bad but I don't quite know what's going to happen now."
Oy. Well, that sucks.
"You're going to laugh when you hear this" always means, "Ohhhh you're going to be maaaaaaaadddddd."
This isn't going to end well... ...for the serial killer.
"Uh oh" is right.
And there it is! The trope you never think of in the moment comes back and gets ya.
That is the thing. Yeah.
Wait? The killer is trapped?
Yeah, so, there's some bad news to break. He's a first-time killer, you can understand why he maybe doesn't get it.
But he does. He understands.
He's going to die. But the name of this game is Silver Lining, folks. There is some good news.
Chuck better get to it.
Ah yes! How could we have forgotten? There's always a sequel.
This seems like the end for our fair serial killer Sam. It's been quite a journey.
And it's over... ...for now. Thanks for the memories Killer Sam and Chuck. We'll see you for the sequel!