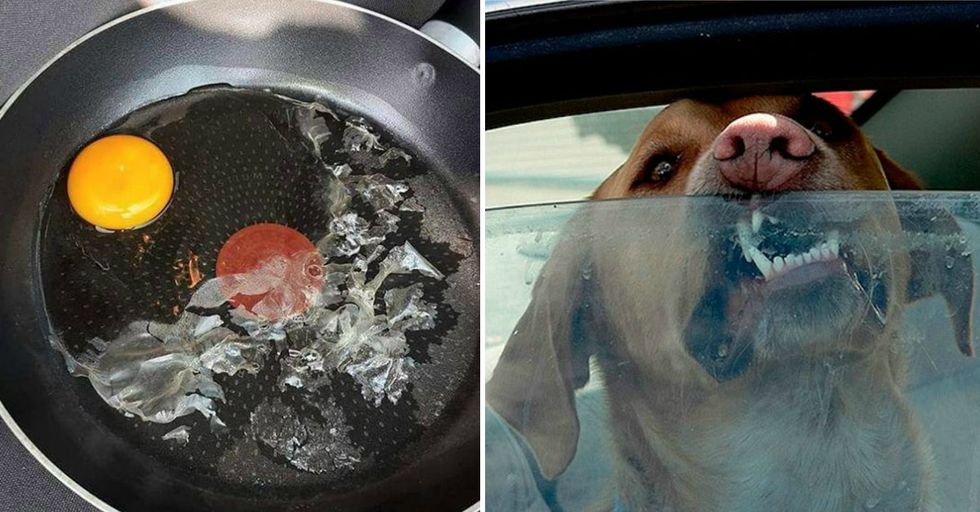 If you have a pet — specifically a dog — you probably like to bring them with you from time to time when you go out and run errands. Although it may seem innocent, leaving a dog in a parked car on a hot day can be fatal — even if you're "just running in for a minute."

To really show just how quickly it can happen, an Imgur user left an egg in a frying pan in a parked car on a hot day for fifteen minutes — all in the hope of raising awareness about NOT leaving dogs in a car.

The interior temperature can reach as high as 160 degrees in less than ten minutes.

It can lead to brain damage or sudden heatstroke death in just fifteen minutes.

Proof? Look at what happened to the egg in those fifteen minutes.

Even on a cloudy day that may not seem that hot to you, it could be a deathly risk for your dog. And cracking the windows won't make much of a difference.

For dogs, staying cool is extra tough, because the only way they can cool themselves is by panting and by sweating through their paw pads.

If you see a dog in a car, take down the car's color, make, model, and license plate number and have the owner paged in the nearest buildings or call local humane authorities.

via: One Green Planet

And other good tip is to touch the pavement before taking your dog for a walk. On an 87-degree day, the asphalt temperatures can reach 140 degrees. If it's too hot for your hands, it's entirely too hot for their poor feet.