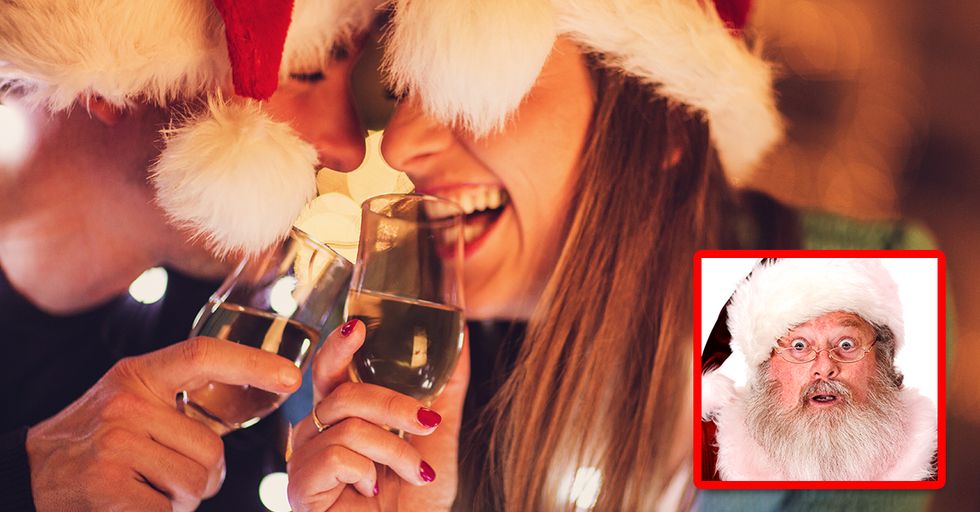 In this era of the Harvey Weinsteins, James Tobacks, Russell Simmonses and Matt Lauers, rape culture is being scrutinized more heavily than ever before. Things that were once given a pass before are no longer allowed the same type of latitude, and for good reason. Now America is waking up to the fact that we have an insidious, deeply rooted problem – one that will likely take decades and no small amount of elbow grease to fix.

This scathing cultural gaze has even turned to that most hallowed of traditions – Christmas songs.

Now that the holidays are upon us, the feminist wrath will fall, as it always does, on that titan of Christmas songs "Baby It's Cold Outside."

On the surface, the song is objectively skeevy.

The man, who is identified as "wolf," notes that "it's cold outside." He offers the woman, designated as "mouse," a drink. The whole set-up seems like rape 101, particularly when Mouse asks Wolf, "say, what's in this drink?"

Comedy website Funny or Die even did a horrifying "honest" rendition of it.

In the video, the Wolf, played by actor and podcaster Scott Aukerman, resorts to increasingly sinister attempts to get the Mouse, actress Casey Wilson, to stay the night. In a clever reference to actor Bill Cosby, Wolf puts pills in Mouse's drink, thus prompting the "what's in that drink" line. Then he physically attempts to restrain her, even resorting to tying her to the chair with duct tape when his efforts aren't successful.  Finally, Mouse is forced to hit him over the head with a shovel, after which she reminds the audience that the song is "completely inappropriate."

But what if the song wasn't as inappropriate as we thought? What if it was, in fact, a clever allusion to women's sexual agency?

This is what one very Tumblr user has claimed. When Tumblr user teachingwithcoffee posted "It’s time to bring an end to the Rape Anthem Masquerading As Christmas Carol," they had no idea another Tumblr user was waiting in the wings to give them – and us – the deep-dive schooling on "Baby, It's Cold Outside" we never knew we needed.

Tumblr user bigbutterandeggman is a self-proclaimed former English teacher/current nerd and a "big fan of jazz of the 30s and 40s."

Therefore, she explained (we are assuming she is a she), she is well versed enough to explain the intricacies of the song to the uninitiated. "Baby, It's Cold Outside," she says, is not the rape anthem we think, but actually a very clever sendup of the sexual social mores of the time in which it was written. Particularly the "what's in that drink" line.

As she explains, "'Hey what’s in this drink' was a stock joke at the time, and the punchline was invariably that there’s actually pretty much nothing in the drink, not even a significant amount of alcohol.

She then goes into detail illuminating exactly why the woman would need to ask those exact words. As she says:

See, this woman is staying late, unchaperoned, at a dude’s house. In the 1940’s, that’s the kind of thing Good Girls aren’t supposed to do — and she wants people to think she’s a good girl... But she’s having a really good time, and she wants to stay, and so she is excusing her uncharacteristically bold behavior (either to the guy or to herself) by blaming it on the drink — unaware that the drink is actually really weak, maybe not even alcoholic at all.

"If we look at the text of the song," Belle says, "the woman gives plenty of indication that she wants to stay the night... The tension in the song comes from her own desire to stay and society’s expectations that she’ll go." Again, this was the 1940s, a time when women couldn't even own their own credit cards or bank accounts. A woman's reputation – and, indeed, her entire being, some might argue – were subject to the whims of other people – particularly men. That's why Mouse is so concerned about what "the neighbors might think," and why she adds, "my maiden aunt’s mind is vicious," "there’s bound to be talk tomorrow."

Understood this way, our Tumblr-teacher explains, “hey, what’s in this drink?" then becomes a subtle signal of consent between the two parties.

She goes on to say:

And that is the crux of understanding the entire song.

Basically, the song only makes sense in the context of a society in which women are expected to reject men’s advances whether they actually want to or not, and therefore it’s normal and expected for a lady’s gentleman companion to pressure her despite her protests, because he knows she would have to say that whether or not she meant it, and if she really wants to stay she won’t be able to justify doing so unless he offers her an excuse other than “I’m staying because I want to."

So "Baby, It's Cold Outside" isn't about rape. It's about two willing participants – one (Wolf) with more agency than the other (Mouse) pushing boundaries so they can both enjoy consensual sex.

As Belle says, "We see this in the organization of the song — from stopping by for a visit, to deciding to push the line by staying longer, to wanting to spend the entire night, which is really pushing the bounds of acceptability." At this point, you may be wondering, "So what is he singing while she’s talking about what other people think of her?" Well, Belle has an answer for this too, one Tumblr user bigbutterandeggman agrees with. "He’s providing her with a list of cover stories, essential, excuses she can use to explain why she hasn’t or won’t go home." Well, ain't that something...