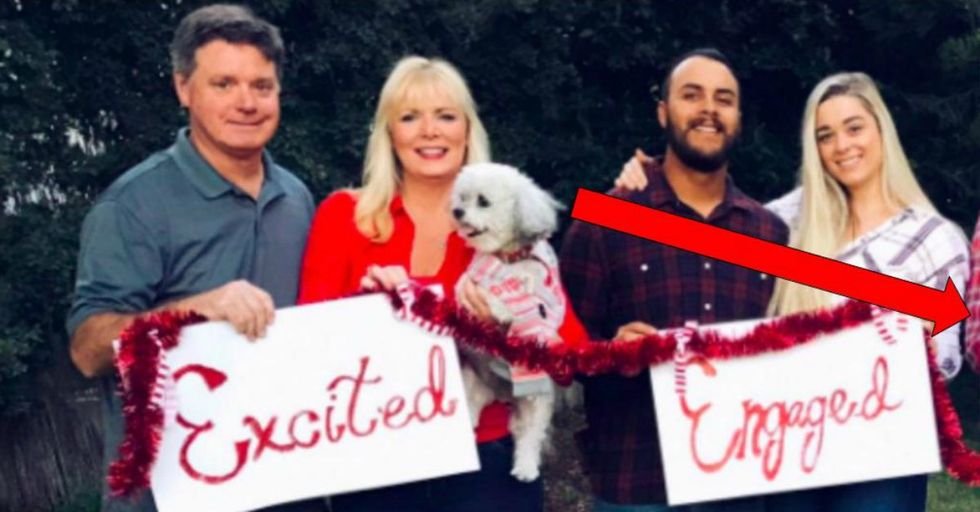 Everyone loves a good Christmas card! They're the best way to keep in touch with people who you don't see very often and so much more personal than a Facebook "like." Most families go for the standard pose with everyone smiling at the camera (and maybe wearing Santa hats). But some families take things to the next level and create hilarious cards that bring joy all year 'round. That's exactly what the family in today's story did this year.

Let's take a look at the Christmas card piece-by-piece. First, we have the parents.

They're holding a sign that says "Excited." Adorable. They've got a puppy in a sweater and festive garland. But what are they excited about?

To answer that question, we have to look at the next couple. It's a happy couple!

And they're engaged! That explains what the parents are excited about. OK, who's next?

This one has an adorable daughter, a husband in flip-flops, and a baby on the way! We know what you're thinking. This card is cute, but it's not exactly hilarious, right?

We've got parents and two happily coupled daughters, and then there's...

Emily. All by herself.

Here's a look at the whole card:

This is brutal...but also hilarious. We're happy to see that Emily's such a good sport, though! After Emily posted the Christmas card to Twitter, it went viral. Soon, people started sharing their own versions of the "forever alone" holiday greeting...

So many people were sympathetic to Emily's single plight.

Being single around the holidays can be hard, but look on the bright side: You don't have to buy gifts for a significant other! Plus, you can be the funniest part of your family's Christmas card!

Here's another take on the same design, only this family apparently didn't have someone named Emily:

But hey, egg salad is also good! The best part of egg salad is that you don't have to buy it any Christmas gifts, either. Egg salad is there for you no matter what. Until you eat it, that is.

And that guy isn't the only one who really likes eggs:

Egg McMuffin! Of course! Another solid entry in the Eggs v. Significant Other debate.

This family didn't have any fancy posters or garland, but the meaning is pretty clear:

There's nothing quite like being the ninth wheel in your own family portraits. You know what you need? Dogs. A lot of dogs.

And here we have the classic Couch O' Couples:

Kelsey: Can I sit on the couch with you guys? Couples: No, Kelsey. You know this couch is only for people in love.