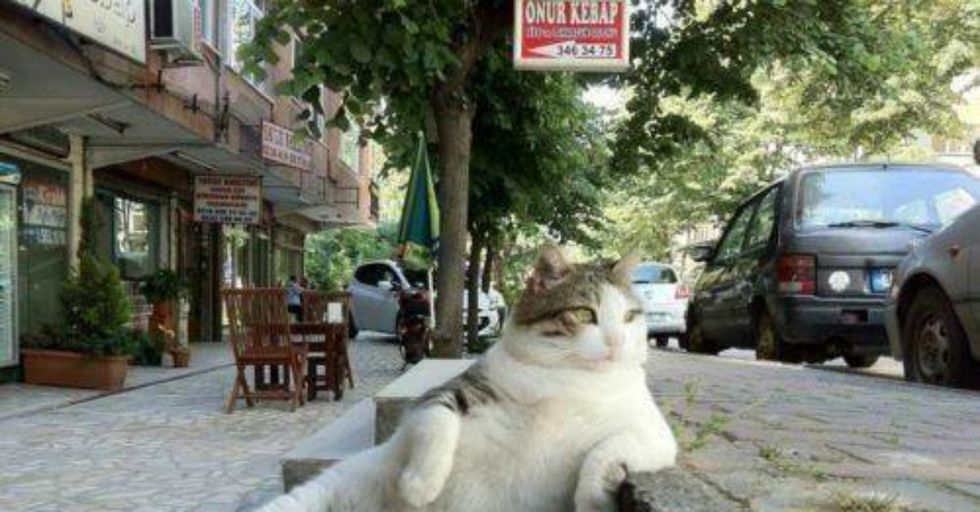 When it comes to American pet owners, there seems to be a pretty clear line drawn between two camps: dog and cat. Both animals are adorable and have standout traits. Sometimes it does seem like dog owners tend to dominate — think dog parks, and that little saying that implies they're "man's best friend."

But in other parts of the world, cats may just have the edge.

As it turns out, one country that seems to admire the feline set is Turkey. A very chubby cat stole the hearts of everyone in Istanbul's Ziverbey neighborhood, and sadly, he passed away recently. But what locals did to honor their deceased friend is totally heartwarming — and hilarious.

It's hard to find a more enthusiastic crowd that pet lovers.

It's easy to see why people get borderline-obsessed with their furry (or feathered) friends. They make excellent companions, and have the ability to make us feel like we're the most important person in the world, even when we feel like our human friends are letting us down. They're loyal, sweet, and downright adorable.

But that doesn't mean we don't have our favorites.

Many pet owners fall squarely into either the cat or dog category. Sure, you've got people who own both, but diehards seem to either live for man's best friend or bend over backwards for their feline companions. Both groups will say their preferred pet is the indisputable best, and there's no arguing the point.

Sometimes it seems like dogs really are man's best friend.

The world appears to be structured around keeping dogs happy. Obedience schools, dog parks, and special dog-friendly events and restaurants aren't hard to find. If you're a dog lover, these slobbery, always-optimistic animals are part of the family. They also help police, trot alongside firemen, and even aid in finding people buried under avalanches. What can't they do?

The one thing a dog can't do is be a cat.

True "cat people" are a sight to behold. Mainly because it takes a deep appreciation and dedication to develop a tight relationship with an animal that tends to be ... um ... fickle. In some instances, that's what cat owners admire most about their feline family members. They know that cats are not just adorable, but also that they can be super loyal, too (even if they don't show it in the same way as dogs).

Still, cats mystify some of us.

Cats tend to get a bad rap because of their sassy nature. They're kind of like the opposite dogs: they're finicky, and, rather than always trying to make their humans happy first, instead build fast friendships on their own terms. They want what they want, when they want it. And they won't hesitate to mew all night to get it. They'll cuddle with you — usually after they've had a great dinner and some alone time on the window sill.

And while Americans love their cats, Turkey may just take first prize in that arena.

There's cat love, and then there's cat devotion. A neighborhood in Istanbul, Ziverbey, has recently shown that it indulges in the latter. This is a photo of Tombili, a local cat who Ziverbey residents thought of as one of their own. Cats are highly respected in Turkey, and Tombili's easygoing attitude gained him love and affection from everyone who met him.

Tombili lived a full life abundant with affection, but, much to the sadness of the locals, he died this year. But though he was gone, the people were determined that he not be forgotten. A petition asking that a memorial be set up to honor the late cat was launched, and the residents of Ziverbey got their wish. The result is endearing, hilarious, and beyond expectations.

The statue did not disappoint.

The residents of Ziverbey who loved Tombili were not let down by whoever commissioned the amazing, little cat memorial. "Tombili" is a Turkish word used for chubby animals, and — as you can see here — Tombili fit that description in life and death. His casual "lounge" pose is still endearing, even if it's not the real deal anymore.

Joy over the new statue was short-lived, however. Recently, "Tombili" was stolen, and no one was happy about it. Besides the locals being deeply incensed, fans around the world caught wind of the news and were totally upset. In life, Tombili had become somewhat of an internet sensation, so when when the rotund statue went missing, it wasn't just Turkish people who were on the lookout.

Thankfully, someone did the right thing.

And yet, all was not lost. The anguish of the people wasn't ignored, with even the Russian embassy in Turkey making it known that they were highly concerned about the situation. Whoever took the fat-cat statue must've had a crisis of conscience, because "Tombili" was returned and promptly reinstalled at his usual haunt on the stone steps.

It's good news for locals and the rest of us.

With the return of the famous cat statue comes the opportunity for Ziverbey to have the comfort of their chubby "friend" back, and for travelers to visit the landmark as well. But we do echo the sentiment of this Twitter user. Hopefully, from here on out, Tombili will rest in peace and keep hanging out on his steps for many years to come.