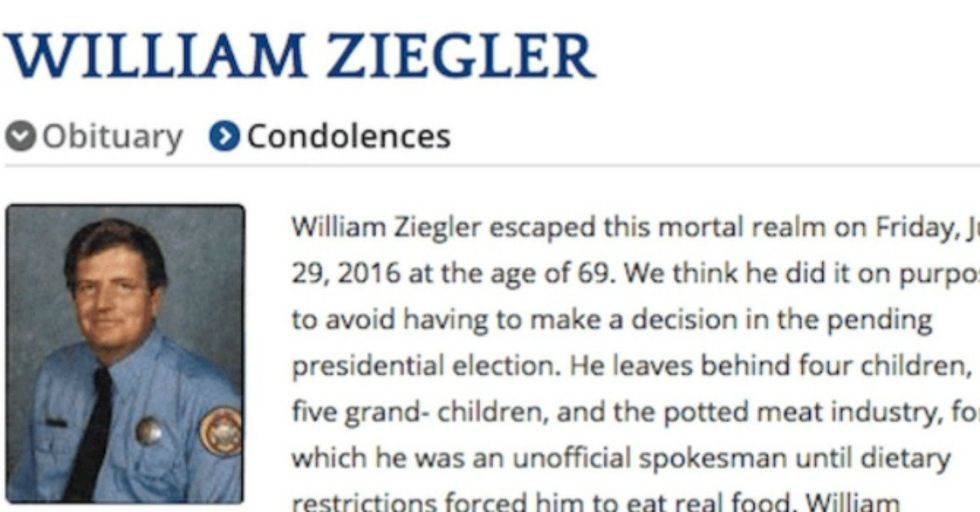 Traditional obituaries paint a lovely picture of those who have passed on, listing surviving family members and the template of life accomplishments.

Obituaries serve many purposes, but they're thought of in almost always the same way.

"Someone died, which is sad." While that's true, there's far more to them than that.

As with so many things in life (and death), timing is everything.

Obituaries are almost written and released during a family's period of grief, which means that sometimes the "bigger picture" of a life isn't examined as much as the loss.

While all that is totally understandable, there's something to be said for turning an obituary into a celebration...when applicable.

It's hard to find the humor during a period of mourning, but sometimes it's done to tremendous effect.

Here's how one family turned lemons into lemonade during what must have been a trying time.

Don't feel bad for laughing, as you'll see. It's what the family and the departed would have wanted.

But when William Ziegler passed away last month, someone close to him decided to veer from tradition and instead paint a hilarious, vivid depiction of a man who you would like to go grab a drink with.

See how the remarkably hilarious way they achieved that goal with just a few words.

He was a husband, father, retired fireman, and from what we can tell, a pretty kick-ass dude.

That's how it's done, people.

And one for Bill. May he RIP.

If that's not enough to get the waterworks and laughter going all at once, I don't know what is.

The unorthodox but strangely effective send-off made fans of his from around the world.

Is it the best obituary ever?

That's a strong statement. See how these others stack up.

Especially if it's sent to your parents while you're alive.

This woman had it in eulogizing her poor departed pup.

Anyone named "Flathead" is good for a charming send-off for sure.

With a name like that, you pretty much have to run with a funny crew.

Screen icon Carrie Fisher wrote her obit prior to passing.

It wasn't the official one, but it would have done just fine.

Finally, we've got this woman, who bowed out at just the right time, it would seem.

Cheers and condolences to the deceased and their families for making us smile and tear up at the same time. It's a tough line to walk.