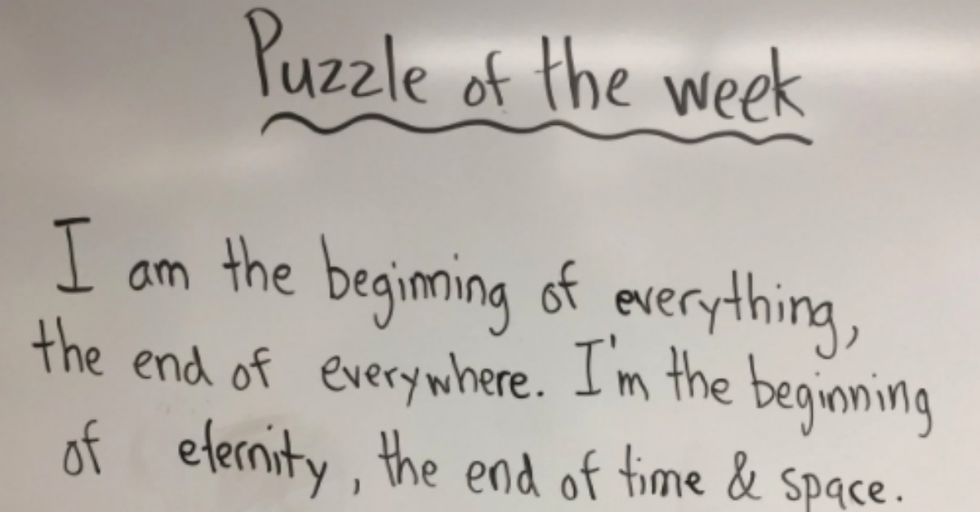 Leave it to tiny children to punch us in the gut with some realness only a few days into 2018. When this first-grade teacher decided to pose a fun riddle to his class, he probably didn't anticipate that his students would send him (and the entire Internet) spiraling into an existential and philosophical crisis of epic proportions.

Thanks, kid. Your teacher tried to get you thinking and add some lighthearted entertainment to the school day, and you paid him back with a stark reflection on humanity, religion, and all this other crap we didn't want to think about yet this year. We are mere days into 2018. All we wanted to worry about was our green smoothies and that year-long gym membership we just foolishly splurged on.

When first-grade teacher Bret Turner took a dry-erase marker to the whiteboard to provide his class with a riddle Tuesday morning, he probably didn't anticipate that he would end up questioning his entire existence.

How did we get here? Yes, how did we get to this crying-laughing disaster face, but also how did we arrive on this planet, at this moment in time, at this juncture in the universe. What does it all mean? What is life, if not the aftermath of death?
What are we doing here? No, really. What are we doing here? Why is this small child's answer to a riddle — which, for the record, was wrong — sending us head-first into a nightmarish contemplation of our own mortality?

Of course, kid No. 1 wasn't the only offender.

Before I finally revealed the "correct" answer to the riddle, to a largely unimpressed audience, I fielded other gu… https://t.co/JRC9S9OeY2
— Bret Turner (@Bret Turner)1514998849.0

"Nothingthing" sounds like a character from A Wrinkle in Time. Or a place in The Phantom Tollbooth. Well, great, let's just crawl back in the womb and read all the formative books that shaped our childhood. But we can't do that just yet because believe it or not, there's more to this story...

Ever the mensch, even in the face of a philosophical crisis, Turner tweeted that he might tell his class that they've become famous for piercing the consciousness of the entire Internet.

I’m considering telling the kids tomorrow that a tweet about them went viral, and given their facility with the int… https://t.co/wgBnwkGkBc
— Bret Turner (@Bret Turner)1515030740.0

Man, first graders are totally brutal. Sometimes we forget that kids are always super honest because they haven't yet learned that lying, smiling, and nodding are the three most efficient ways to get through life. (JK, JK. Kind of.)

Even if these kids are more concerned with their right to use the toilet than with going viral, it cannot be denied that they started a conversation.

Someone on Twitter asked in response to Turner's first tweet, "How is death the beginning of everything exactly?"
And this woman responded with the most devastatingly moving answer in the universe. Woof. Excuse us. We need a minute.

One thing about this story is for sure: Kids are smarter than adults. This similarly brilliant test answer proves it:

Of course if you only pretend to push a ball, the ball doesn't move. Of course. And yet, this kid's perfect answer was marked wrong. What subject is this test even in?

Not only can we rely on kids for existential crises, but we can also count on them to call out sexism and misogyny of the everyday kind:

This girl had the absolute perfect answer for a word for "hospital lady" with "ur" in the middle. Chances are, she even made you question your own latent subscriptions to prejudices. So thanks, children of the world, for not letting us off the hook. We need a good kick in the pants every now and then.