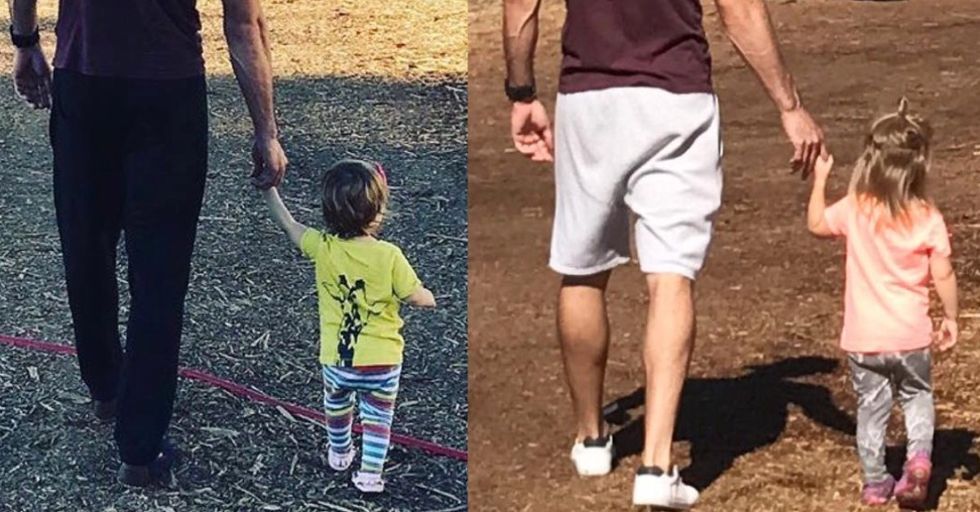 This First-Time Dad Sweetly Comforted His Newborn Son During Vaccinations

We all know the stereotypes: moms do everything perfectly and dads are bumbling idiots. Any family sitcom will tell you this. In fact, we expect so little of men and fathers that the mere notion that they could be in charge of their own children has been the premise of countless successful movies and TV shows. But the truth is that men are not only competent parents, they also bring something valuable and unique to parenting that is theirs alone.

For some reason, we love to see dads with their kids.

Whether it's because we have unfairly low expectations of men and fathers, or we are naturally smitten by good fathering, dads doing the simple act of parenting gets our attention. Dad-parenting is often different from mom-parenting.

Dads get a bad rap when it comes to knowing what they're doing.

Fair or not, the goofy, clueless father is an archetype. He's the counterpart to the nagging, martyr mother. The truth is that both and neither of these stereotypes are entirely true. But that won't stop us from laughing and rolling our female, all-knowing eyes at this guy dropping his cell phone on his brand-new infant.

When dads are caught in the act of simply being dads, it gets a lot of attention.

Who can forget this conference call which was epically interrupted by a strutting toddler and a rollaway baby? The contrast of the serious working man, talking about very serious issues, and his silly children is hilarious. But would this video have received as much positive attention had the working parent been a mom?

It's certainly not right, but we still swoon over a dad demonstrating good parenting in a way that we don't when a mom does the same.

This is Antwon Lee, relaxing at home with his first baby, Debias. We can clearly see that Antwon is smitten with his infant son. Their special bond, and Antwon's very dad-like brand of excellent parenting, were recently captured in a now-viral video.

Antwon is new to fatherhood, but he seems to be a natural.

This video is a great example of that distinct magic that dads bring to parenting, that's a little different from what moms bring. His overwhelming love is evident as he uses humor, empathy, his voice, and his influence as his son's father to comfort Debias (and himself) through the immunization process. This sweet video has gone viral in that way that only dad videos seem to be able to. It reminded us of some other epic fathering moments that the internet went gaga for.

How about this dad who faked his own pee accident to help his daughter feel better about hers?

Ben Sowards doused his pants with water before heading to pick up his six-year-old daughter Valerie from school. Valerie had had an accident and was feeling sad and embarrassed about it. Dad saved the day by walking into the school and asking his daughter if he could borrow her backpack to cover up his own embarrassing accident.

We all fell for this dad's morning affirmations with his daughter.

The only thing we love more than a dad caught doing great parenting is when he's parenting his daughter. The father-daughter relationship is the stuff that tugs at our heartstrings and leaves us in need of a tissue. Seriously though, HOW FREAKING ADORABLE IS THIS GUY WITH HIS DAUGHTER?!

Clipping your kid's nails is the epitome of mundane parenting.

But when it's done by a dad and the baby keeps pranking him, we can't get enough. This video is making the rounds on all of our social media feeds for good reason. That baby is destined for comedic greatness.

Even the simple act of a father standing near their child can get a ton of attention.

American actor Justin Baldoni recently experienced viral fatherhood when he shared a photo of himself, his own father, and his daughter. She was having a meltdown in the grocery store and the two generations of fathers simply stood by. They didn't succumb to the embarrassment that parents everywhere know all too well. Instead, they simply let her be an upset toddler.

Still, we probably need to hold our men to a higher standard, and not be so easily impressed.

Fathers everywhere are out there doing that hard job of parenting in that special dad way. Sure, they sometimes kick the ball into the kid's face, but they also swoop in and catch the baby before she falls off the couch. They parent the best way they know how, and that's all any of us can do. Moms may live with unfair expectations of perfection, but dads also have unfair expectations placed on them. They aren't hopeless or helpless, and we have video evidence to prove it.