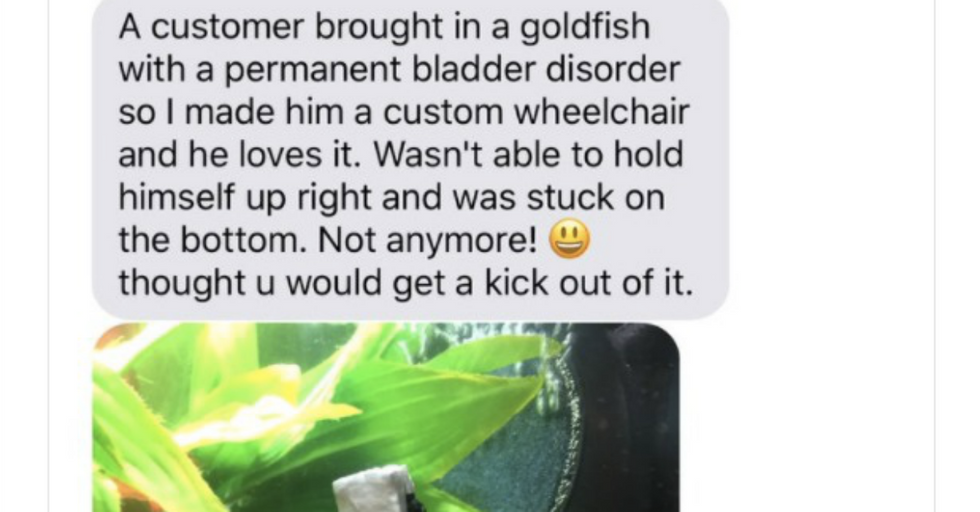 If there's anything we as a country need right now, it's a story of a handicapped pet goldfish who got a homemade wheelchair to help him float.

Taylor Nicole Dean, a 19-year-old YouTube star who makes educational animal videos, recently got the best text ever from her friend, Derek.

And clearly, she had to share it with the world. Derek works in an aquarium shop where a customer brought in a goldfish that was suffering from swim bladder disease, which affects the fish's buoyancy in water. This poor little guy couldn't hold himself upright, so Derek did something incredible: He built the fish a custom wheelchair.

Look at him! How cute is that?

Derek explained the very delicate process of constructing this wheelchair to BuzzFeed News: "I got some airline tubing that people usually use in their tank and just placed it around the goldfish. I added some valves to the bottom of it, which acted as a 'chair' to prop him up. I added weights to the bottom of the 'chair' and something to keep him afloat on top (styrofoam), and slowly removed pieces until I achieved just the right buoyancy to make it easy for him to swim around without feeling like he's dragging around a chair."

Needless to say, Derek is a true hero.

He told BuzzFeed News that the way goldfish are bred has resulted in some pretty significant health problems for these popular pet fish. Luckily, there are people like Derek who care, and people like Taylor, who share these stories.

When Taylor posted the story on Twitter, it obviously blew up.

This is more than a cute story. It's teaching people that all creatures, big and small, deserve to be loved.

Plus, it doesn't get much more precious than a tiny goldfish in a wheelchair.

A few days later, Taylor sent some photo updates along with a tweet that reads, "Just wanted to let you guys know wheelchair fish is still doing well and got an even more comfortable wheelchair"!

Looks like those tubes were replaced with gentle mesh material.

Thanks to the humanity of one aquarium employee, this goldfish is living his best life.