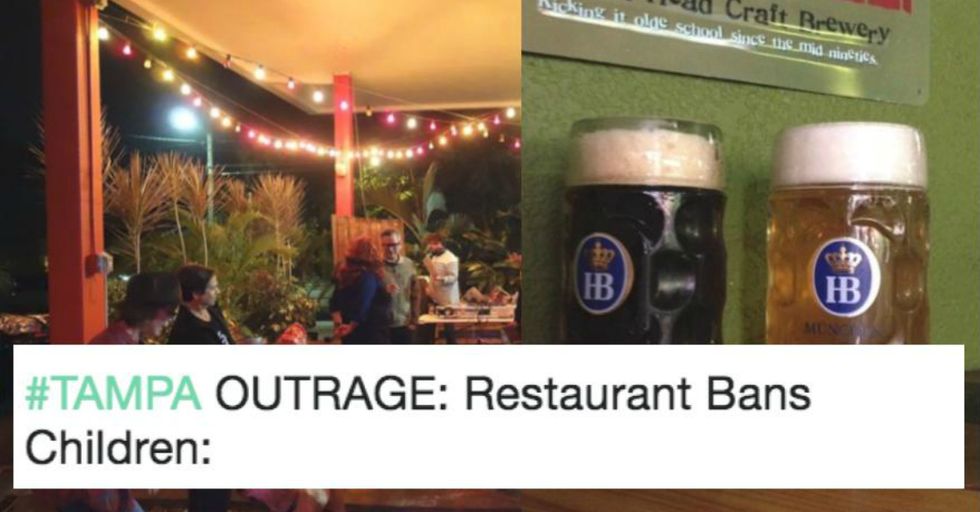 Ever gone out to eat only to have your relaxing meal soundtracked by loud, obnoxious children? You're not alone. It's a fairly common occurrence, and one that can ruin the whole experience of dining out.

So when a popular Florida eatery decided to ban children, some locals were ALL about it.

And, of course, others — namely parents — were livid.

Noisy kids in a restaurant can be pretty annoying.

You settle in for a nice, relaxing evening out, and all of a suddenly there's an army of tiny, screaming humans doing everything possible to distract you from the delicious meal in front of you.

So is the idea of having a kids-free restaurant such a bad idea?

According to some ticked-off Tampa parents, it is. Hampton Station, a well-known beer garden, restaurant, and bar located in the Seminole Heights neighborhood of Tampa, recently added a small but direct sign to their door just above the listed hours: NO CHILDREN.

The ban came as a result of a dangerous incident involving unsupervised children.

While owner Troy Taylor abstained from sharing specifics, he stressed that this new rule was a safety move. “It’s basically about children’s safety. We’re a small local place and I couldn’t stand to have someone get hurt, especially a kid, on our watch," Taylor told TODAY. “And we really don’t have the staff to monitor that kind of stuff."

While it seems like a reasonable decision, the ban sparked a pretty intense debate after a group called Tampa Bay Moms posted about it on Facebook.

Many Moms in the area were NOT having it, and seemed personally offended by the ban. “Really, Hampton Station?" one woman commented. "My family has been very loyal, with you being ‘our’ pizza place. Visiting and ordering weekly. We have given you so much business. Sad and angry that we will be taking our business elsewhere."

“We always sat outside because I don't allow them to sit at bars," another woman wrote.

“No children because the owners are too afraid of confronting a few parents that have misbehaving kids and pissing them off. So better solution is to piss off ALL parents that patronized. Great thinking guys ... we won't be ordering take out either."

Mixed in with the outraged comments were several coming in defense of the establishment.

“Is their decision to not allow minors hurting you in any way? No? Are there other places available for you to take your family in the area? Yes? Okay, so than why throw your arms up in anger?" said one woman.

“It's their business and they are allowed to run it as they see fit."

"You don't have to like their decision, just like they don't have to run it the way you want it." After many users demanded to know an age range of banned kids, the owner purposely remained tight-lipped on the topic.

“We left it broad," Taylor said.

"It could be a 25-year-old for all we know if they’re acting childish." Where do you stand on the ban? Is it discriminatory toward families? Or a smart business move that promotes safety and creates a more enjoyable dining environment for those dining without kids?