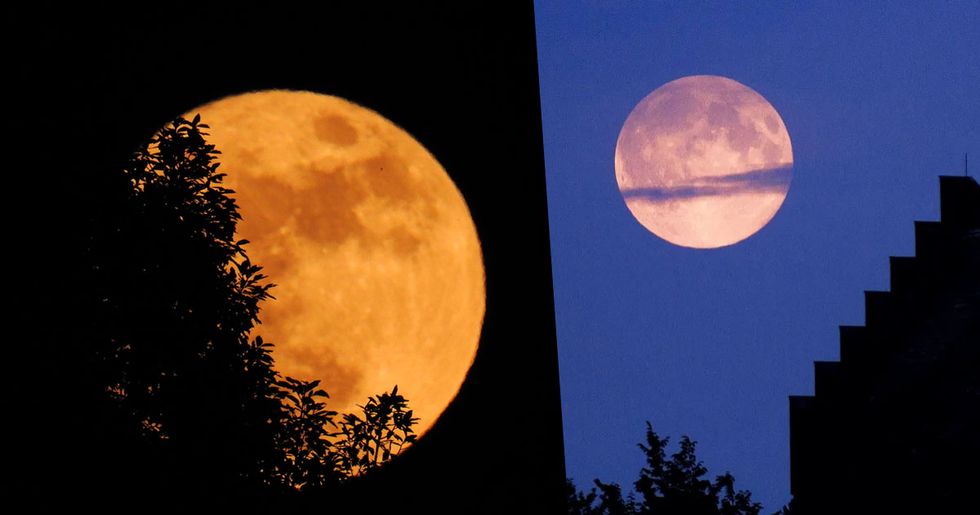 This Friday 13th Will Have an Incredibly Rare Harvest Full Moon

Even though nothing bad has ever really happened on a Friday 13th (well, not because it was Friday 13th, anyway), there's always a sense of anticipation and mystery whenever we do get blessed with one.

And it looks like this month's Friday 13th will bring something that is definitely on the unusual side.

Mother Nature is expected to bring us an incredibly rare harvest full moon and it really will be a sight to see. This kind of full moon rarely makes an appearance, and the coincidence of it happening on Friday 13th is just incredible, so keep scrolling to learn more...

Is Friday the 13th really so unlucky?

Let's forget black cats, walking under ladders, and tipping over the salt shaker for a minute. It's Friday the 13th that truly ruffles the feathers of the superstitious as it is considered to be one of the unluckiest days of the year.

Believing in the supernatural...

Superstitious people are those who believe in supernatural goings-on that do not abide by the laws of nature, such as the belief in magic, omens, good luck charms, and bad luck.

Many believe that black cats are the familiars of witches and warlocks, which date back to around 721 B.C.

The superstitious believe that, if a black cat is around, a witch is following you...

But on the other hand, if a black cat crosses your path and continues on its way, it is a sign of good luck as the witch hasn't noticed you. Thank goodness for that...

The superstitious are weary of this particular day...

Friday 13th can make an appearance at any time during the year and it's hard to predict when it will come about unless you check your calendar thoroughly every year.

It is particularly unlucky in western superstition...

It's only relevant in the Gregorian calendar, which is the most used calendar in the world. It's named after Pope Gregory XIII, who introduced it all the way back in October 1582.

So what made it so unlucky?

According to The Independent, it's thought to originate from The Last Supper that was attended by thirteen people - Jesus Christ and his twelve disciples on Maundy Thursday, the night before his crucifixion by Roman soldiers on Good Friday.

This is when things get complicated...

The number thirteen is associated with Judas Iscariot, the betrayer of Christ, and is regarded as imperfect compared with twelve, which represents the number of months in the year.

Even though Friday the 13th rarely brings any bad luck...

There are still thousands of people around the world who anticipate the fateful day, and many even suffer from "paraskevidekatriaphobia" - more commonly known as an irrational fear of the day.

But there are some cultures that consider the day to be lucky...

Italy believes that the 13th day is a day of good luck and fortune, and, when it comes to being unlucky, there is little evidence to show that Friday the 13th is an unlucky day and it has no effect on major accidents or disasters.

But fear of the number thirteen is more common than you would think...

In numerology, thirteen is considered an evil or significant number that follows twelve - a considerably more "complete" number. Unbelievably, around 8 percent of Americans suffer from paraskevidekatriaphobia, despite the incredibly low chances of anything bad happening on the day.

Like any phobia, the fear of the number thirteen can control people's lives...

Many paraskevidekatriaphobes refuse to leave the house on the 13th day of each month, even avoiding important tasks such as going to work or making a doctor's appointment. Signs of anxiety and stress are often displayed as the date approaches as they completely believe that something terrible will happen.

The series of Friday the 13th movies probably doesn't help...

Movies about a series of bloody mass murders on the night of Friday the 13th isn't a great representation of the superstitious day and will most certainly not ease a paraskevidekatriaphobes' fear of the day, but this fateful day isn't all bad...

It's all down to the chances of Mother Nature...

Scientific phenomenons can happen on any day in the calendar, such as blood moons or shooting stars - it's all down to chance.

This year's Friday the 13th is expected to bring us a harvest full moon...

A harvest moon is a full moon that occurs closest to the September equinox every year. Because the moonrise comes so soon after sunset, it results in an abundance of bright moonlight early in the evening - this is where the name "harvest" comes from as farmers harvesting their summer-grown crops developed this occurrence into a traditional aide.

This amazing occurrence is celebrated by farmers and crop workers...

The harvest moon basically allows farmers to work a lot later into their evenings at harvest time due to the elongated light.

This is because it will appear to be around fourteen-percent smaller in the sky as it is nearing the point in its almost month long elliptical orbit at which it is furthest away from Earth - known as its "apogee."

The harvest moon will be an early riser...

It has been predicted to make an appearance at 9.32 am EDT.

Many have outlined that a harvest moon hasn't happened since 2000, and it won't happen again until 2049, so we had better make the most of this beautiful sight tomorrow morning.

Perhaps it's time to push superstition aside...

More and more people are beginning to see Friday the 13th as a day of good luck, rather than one of the bad. Having the opportunity to witness one of Mother Nature's most remarkable phenomenons is something truly special, so it's time to look at Friday the 13th in a new light and embrace the beautiful world that we live in. To hear more about the power (and beauty) of nature, keep scrolling!