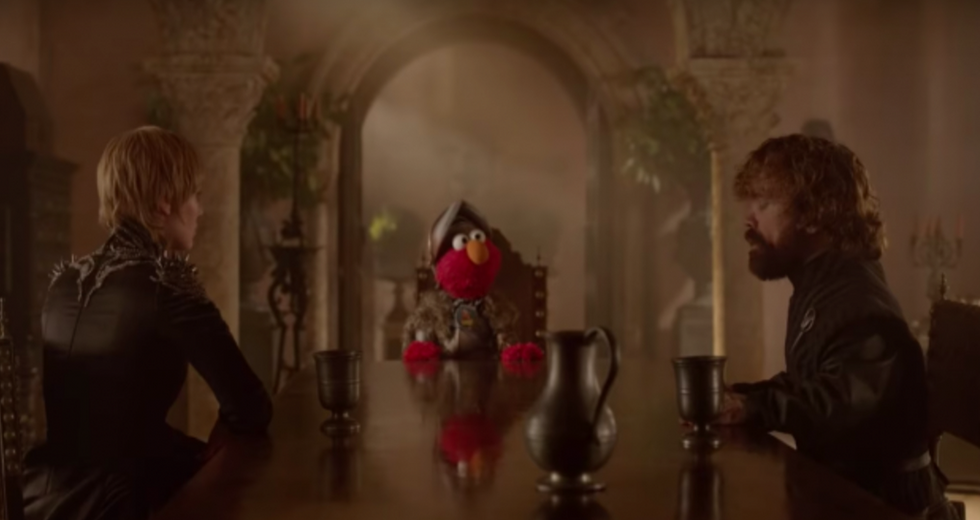 This 'Game of Thrones' 'Sesame Street' Mashup is Literally Perfect

Game of Thrones fan theories say Jon Snow is the ‘Prince Who Was Promised.’ Apparently, he will be the hero to save the Seven Kingdoms from the Night King. But what if they're wrong? What if the real hero of the realm is actually... Elmo?

Yes, Elmo. With Westeros at war, Elmo of House Sesame Street is bringing “respect” to the battlefield of the Game of Thrones.

HBO, which also airs Sesame Street, launched a crossover, kid-friendly PSA during the premiere week of Game of Thrones' final season. The video shows Elmo visiting King’s Landing for a meeting of the small council that includes combative siblings, Cersei, and Tyrion Lannister. As Cersei and Tyrion trade insults, Elmo comes in and mediates. “You two need to respect each other,” commands Elmo.

The lesson of respect and kindness is a common theme on Sesame Street, yet on Game of Thrones, it’s definitely not. Some characters do treat each other with respect but for the most part, characters are treated with dragon fire, knives in the back, and poison. Who knows, though? Maybe with a little lesson from Elmo, they can learn to get along, at least until the next episode of Game of Thrones.

We're all, one way or another, familiar with Sesame Street. It’s been on the air, entertaining children for decades.

It’s actually fun seeing my kids enjoy Sesame Street as much as I did over thirty years ago.

Sesame Street has been a long time favorite for both kids and adults.

Did you know that the very first episode of Sesame Street aired on November 10, 1969?

It started 50 years ago and Sesame Workshop has events planned to celebrate its anniversary.

Some of our parents also watched the show, that’s pretty amazing.

‘50 Years and Counting’ is the yearlong celebration of the shows 50th anniversary.

They’ve got events planned all over the country. A 10-city trip will include a free Sesame Street festival at each city with live performances and kid-friendly activities.

Part of the celebration includes the start of the “Respect Brings Us Together" campaign.

Respect being a lesson that is common among the characters and dialogue of the show.

Sesame Workshop announced the campaign last week to highlight the importance of respect even during disagreements.

The campaign is not only featuring characters from GOT, but other celebrities as well.

The “Respect Brings Us Together" campaign will rollout throughout the year.

After seeing the few clips that have debuted so far, we’re totally looking forward to it.

The 'Respect Brings Us Together' campaign also highlights a list of 'Sesame Street' classics that model respect.

These classics also show examples of how kids can overcome differences.

Jeffrey D. Dunn, president and CEO of Sesame Workshop, says “A key purpose of the show has always been to model that everyone, no matter who you are or where you are from, deserves respect."

As I watch Sesame Street with my kids, I can say that this is very true.

'Sesame Street' is all about teaching valuable lessons.

“Our hope with this campaign is that a lighthearted look at a very serious subject can help us all pause for a moment to remember the value in respecting the viewpoints of others, even when they differ greatly from our own," Dunn explained on the Sesame Workshop press release for the campaign.

'Sesame Street' has always had an excellent way of combining pop culture with their show.

They have the secret sauce in getting the attention of adults too. These are lessons everyone should know and learn, after all.

'Sesame Street' moved to HBO in 2015, while PBS still airs the show, new episodes do not air until nine months after their run on HBO.

You can also stream the vintage Sesame Street episodes on the HBO app.

And since Sesame Street airs on HBO, it's a genius way for the campaign to include some of the networks hit shows.

Game of Thrones is not the only show featured on the campaign.

The other HBO show featured on the campaign is Westworld.

If you haven't watched Westworld then “freeze all motor functions" and go watch it.

Cookie Monster is a favorite over at my house and the Westworld/Sesame Street clip is awesome.

The campaign is also also being promoted on a music video starring hip hop artist Common.

The song is actually quite catchy and features vocals from Big Bird.

With all of the excitement surrounding the final season of 'Game of Thrones' and the 50th anniversary of 'Sesame Street,' the two iconic shows have combined for the greater good of all.

I wouldn’t be mad for as much Game of Thrones as we’ve had of Sesame Street.

And if you're a GOT fan, you know thats it’s been a lot of battling with those two characters.

You can’t ignore me forever," Tyrion says, as Cersei ignores him.

“I only want what’s best for Westeros," Tyrion says.

Tyrion is the master of talking his way out of dire situations.

“And I only want for you to not get what you want," Cersei replies.

This is actually a line I could imagine her saying in Game of Thrones.

And in comes Elmo, one of the most adorable and kindhearted muppets known to man.

How could Cersei and Tyrion not get along after meeting with Elmo?

"Elmo thinks that you two need to respect each other," Elmo tells the siblings. “When Elmo has a problem with his friends, like Abby or Cookie Monster, Elmo doesn’t get upset, Elmo listens and learns from what they have to say."

When you watch the video, you’ll catch Tyrion mouthing “cookie monster?" to Cersei as if he could be a dangerous character when we all know Cookie Monster is only a danger to cookies.

Tyrion goes on to say “If we stop fighting and work together, we can be stronger. I’m willing to learn and listen if you are."

An important lesson for children or anyone to learn.

“Will Miss Cersei try to listen and understand what Mr. Tyrion is saying?" Elmo asks.

Queen Cersei is not one to be messed around with, but for Elmo I think she has a soft side.

Naturally, Tyrion the character that “drinks and knows things", proposes a toast for his new friendship and truce with his sister.

I think I do need a Tyrion t-shirt with this infamous line.

The 'Game of Thrones' actors, Lena Headey, and Peter Dinklage, also got to meet Muppets based on their characters on the show.

And they are basically a splitting image of each.

At least until the next episode of 'Game Of Thrones,' seems like Tyrion and Cersei can get along.

And in the Seven Kingdoms that’s heading towards a long battle, this is needed.

Hopefully, we’ll get to see more 'Sesame Street' and 'Game of Thrones' crossovers. But for now, let's check out the adorable mashup.

Clearly, we can’t get enough of either shows.