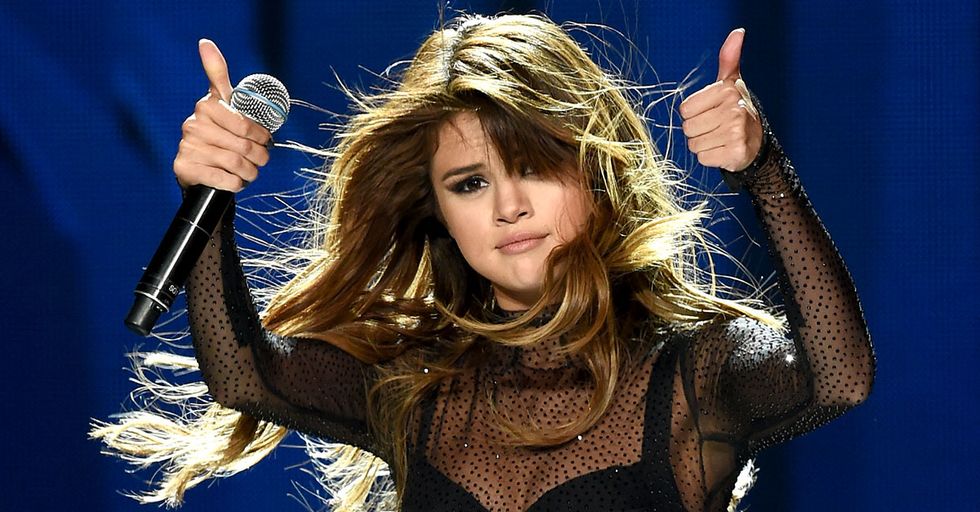 If you're a male between the ages of 18 and 25, you've probably had a crush on Selena Gomez at some point during your life. The former Disney star was a middle school crush that many boys of a certain age had, but now she is all grown up and slaying the world. Apparently, Gomez also has a secret twin out there.

Most of the time I see a celebrity doppelgänger I'm not very impressed, but this is a whole different story.

This is 23-year-old Sofia Solares, who may or may not actually be Selena Gomez in disguise.

OK, it's not. But they look a lot alike.

I'm sure she probably hears that a lot.

Because just look at her. Who is who?

The only giveaway here is the giant Coach bag and the (probably) million-dollar fur coat she's wearing.

Physically though, they're identical.

I kind of feel bad, because I imagine it can get pretty annoying being told you look like someone so much.

But at least people compare her to Selena Gomez of all people, which is a very nice comparison to say the least.

I just get B-list comparisons, which I don't really know how to feel about. But try telling Gomez and Solares apart without using their Instagram names as a giveaway. I bet you can't.

Ahh. You looked! Selena and Sofia sounds like the name of a '90s Nick-At-Nite show or something. It'd slot in right after Full House but before Family Matters.

The more you look at them, the harder it gets to tell them apart.

The giveaway here is the little names above the Instagram posts, but if those weren't there I bet there's no way you could tell them apart.

If Gomez ever needs a stunt double or decoy, she knows where to look.

Sofia has actually gained herself quite a following on Instagram, having amassed nearly 300,000 followers.

She tells E! News, "Honestly, with time I've already gotten used to people saying, ‘You look like Selena Gomez,' wherever I've been...It's not something that I dislike, but I like it better when they love me for being myself," which is the perfect way to handle it, in my opinion.

Nearly every one of Sofia's posts are full of comments tagging Selena Gomez, saying how much they look alike.

"I love Selena Gomez and I declare myself a fan of hers and of course it would be a dream to know that she is aware of my existence," she said. Will Gomez reach out and make a fan's dream come true?

Gomez and Solares have yet to meet, but the powers of the Internet will surely bring them together soon enough.

Especially now that people are picking up the story, Gomez is bound to catch wind of this.

Until then though, we'll just have to dream.

It looks like the key difference in many of Gomez's pictures is the quality of the camera and the fact that everything she wears looks more expensive than my car.

Sofia has a bit of a simpler approach.

But don't even get your hopes up; she's still way too good for us.

Even if Sofia isn't yet rocking enormous Coach bags, she's still doing well for herself on social media.

And she very well might be on her way to giant Coach bags too.

Sofia said that she would "cry of happiness" if Selena were to take the time to write her something.

So, the ball is in your court, Gomez. Make it happen!