This Girl's Father Passed Away, but Because of His Final Act, She's Still Receiving Birthday Bouquets From Him Five Years Later | 22 Words 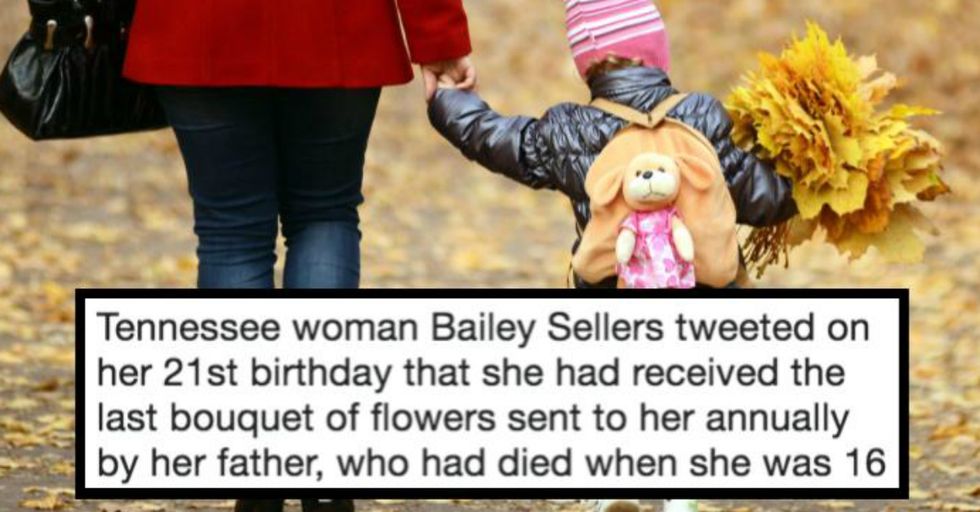 This Girl's Father Passed Away, but Because of His Final Act, She's Still Receiving Birthday Bouquets From Him Five Years Later

Grief is one of the hardest things about being human. Losing a loved one takes an immeasurable toll, and afterward, mementos and memories are often all we have to cling to.

Bailey Sellers, who lost her father to pancreatic cancer when she was just 16 years old, knows this particular pain all too well. What her dad did to comfort his little girl, however, is exceptional in its forethought and overwhelming beauty.

Life has numerous joys and silver linings, but from time to time, the daily grind can seem just that, a grind. Big disappointments and little setbacks happen. But humans are resilient, so we keep pushing on.

Of all life's hurdles however, death seems to be the one most likely to hit us like a train.

Getting laid off, enduring a serious injury, or dealing with family drama are all unpleasant. But none of those come close to the hardship of losing someone close to you. Death is in its own category, beyond any financial woes or physical setbacks.

It's often difficult to see an end to grief.

Grief is an emotion that can be stifling, heavy, and make it almost impossible to function day-to-day. When intense sadness like that has a stronghold on us, seeing any type of light in the future feels next to impossible.

The loss of a parent is one of the most crippling experiences we as humans go through.

If we're close to the people who raised us, their death, especially if it's sudden, brings an avalanche of grief. Parents, often, are the people who moor us and give a sense of home and guidance, so their loss cuts deep and has the potential to leave us feeling adrift.

Thankfully, life equips us with resources to heal pain and get through the grieving process.

While it can seem like they're the only thing we have, memories, though painful at first, can, in time, become the balm that soothes raw pain. Being able to recall happy times, memorable smiles, and holding cherished photos close helps, at least a little.

This young woman intimately knows the pain of losing a parent.

No stranger to the death of a loved one, Bailey Sellers lost her father when she was just 16. Her dad, Michael, was diagnosed with pancreatic cancer in 2013. It was an extremely aggressive form of the disease, and he was given only two weeks to live. It was so sudden, Bailey barely had time to come to terms with what was happening before her dad passed away.

Even though it was a swift process, Bailey's dad made sure she'd remember him.

My dad passed away when I was 16 from cancer and before he died he pre payed flowers so i could receive them every… https://t.co/KBz5hjkvnn
— Bailey Sellers (@Bailey Sellers)1511552130.0

Although the pain of losing her father was immense, he left something behind to comfort his beloved daughter, the baby of four children. Bailey recently posted on Twitter, letting everyone know that she'd received a 21st birthday gift from her dad, even though he wasn't with her anymore.

In an amazing act of forethought, Michael planned a birthday gift every year.

Bailey shared pictures of flowers and a card that could soften even the hardest of hearts. As she explains it, Michael prepaid to have beautiful flowers delivered to his daughter, every year until her 21st birthday. She'd been receiving them for several birthdays and this year was her last one, making the experience bittersweet, to say the least.

The last of his gifts reflects a special bond.

A 21st birthday is a big occasion for any young adult, but for Bailey it marked the end of something special and sweet. Michael had doted on his youngest girl, making sure he was there to coach her basketball team for 11 years and standing next to her in the hospital, while she dealt with multiples heath issues of her own. Making sure she had a birthday gift from him, even after his passing, was par for the course to this wonderful father.

But the gift of flowers had to come to an end, and that was hard in numerous ways for a beloved daughter.

@thesn0wmexican I know. Every year I looked forward to my birthday because I felt like he was still here with me bu… https://t.co/sEVYwuBjcR
— Bailey Sellers (@Bailey Sellers)1511562801.0

Michael Seller's thoughtful birthday gifts were only meant to go on for a certain amount of time, and that fact made this milestone year an extremely tough one for Bailey. She didn't hold back when she let everyone know exactly how raw the final present of gorgeous flowers was for her, and the enormous amount of followers on her thread were quick to agree.

One particular Twitter user pointed out the hidden hope in the final gift.

While Bailey's final gift was fraught with all sorts of emotion, @DrCherylllP pointed out that, like any good parent, Michael stopped the flowers to show his little girl that she is brave, strong, and will be able to fly on her own as she enters adulthood. It's a poignant reminder that, no matter where they are, good parents will always love and encourage kids to the best of their ability. We hope Bailey takes hope in that message and enjoys many happy birthdays to come.