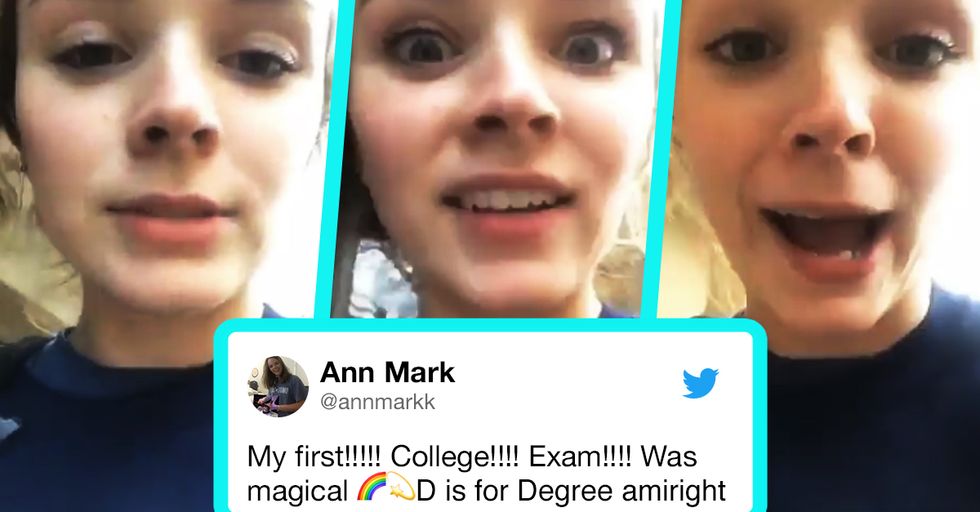 College is hard, and that's the tea. Sure, it's some of the best years of your life — and you can meet incredible people and seemingly survive off of Ramen noodles without gaining a pound — but it's not without its challenges. For one, you have to be able to balance everything else with your schoolwork. It's easy to be distracted during your college years (you're away from home! So many people!), but it's always important to keep up on your studies.

Especially when it comes to those pesky college exams. Take this student's harrowing journey of nearly missing her final exam as a cautionary tale.

On December 15h, she uploaded a video to her Twitter that follows her edge-of-your-seat story of her nearly missing taking her final exam. Seriously, this is more dramatic than a Scandal season finale.

Not to mention that this was Mark's first college exam ever.

You kind of want to do a good job on that one, right? As you can tell from watching the video, Mark had quite the time trying to get to her exam.

For one, she didn't have of those annoying Blue Books that professors require for essay questions.

With mere minutes to spare, Mark had to race and purchase a Blue Book so she could actually turn in her exam. The sheer terror! But the saga doesn't end there.

As Mark explains in her video, her first error was going to the completely wrong building and class.

We've all had that nightmare. She showed up to the wrong building for the wrong exam. (It should be noted that she had only 15 minutes to spare at the beginning of this journey.) Is anyone sweating yet?

So Mark hauls it out of there and runs smack dab...into a window.

Currently tweeting @hederjon to thank him for an incredibly relevant film that saved me from (completely) bombing m… https://t.co/SN7bsssTRi
— Ann Mark (@Ann Mark)1513389459.0

In front of people. Which, of course, is like hands-down the most embarrassing situation for someone racing down the street. The stress is real! Will she make it to her exam??

If you think this story is without twists and turns — think again.

Currently filling out a Craigslist missed connection to thank all the strangers who helped me along the way especia… https://t.co/LFJOZ4iHj0
— Ann Mark (@Ann Mark)1513389629.0

Because Mark thought she'd finally found the right building, but NOPE. She was in the Hog auditorium, not the Hog building. (Side-note: Why are college campuses so confusing?!)

Like any great journey, you can't go on it alone.

Mark had help along the way thanks to some strangers including girl who told her to use Google maps. Talk about a true hero. Not to mention this eye witness of her window run-in.

Is your heart beating as fast as ours is?

So Mark types the correct building into Google maps as quickly as her fingers will go! It's entirely impossible to not be on the edge of your seat while she animatedly tells the story.

In the end, it's a Christmas miracle because...

...Mark made it to her exam! And wrote her essay about Napoleon Dynamite and why it's a great movie. Not only that, but Mark used her internet fame to shed light on an organization that helps LA families affected by the fires. In other words, we love her.

And quite the happy ending. Maybe they'll develop her tale into a feature film? We'd definitely watch that.