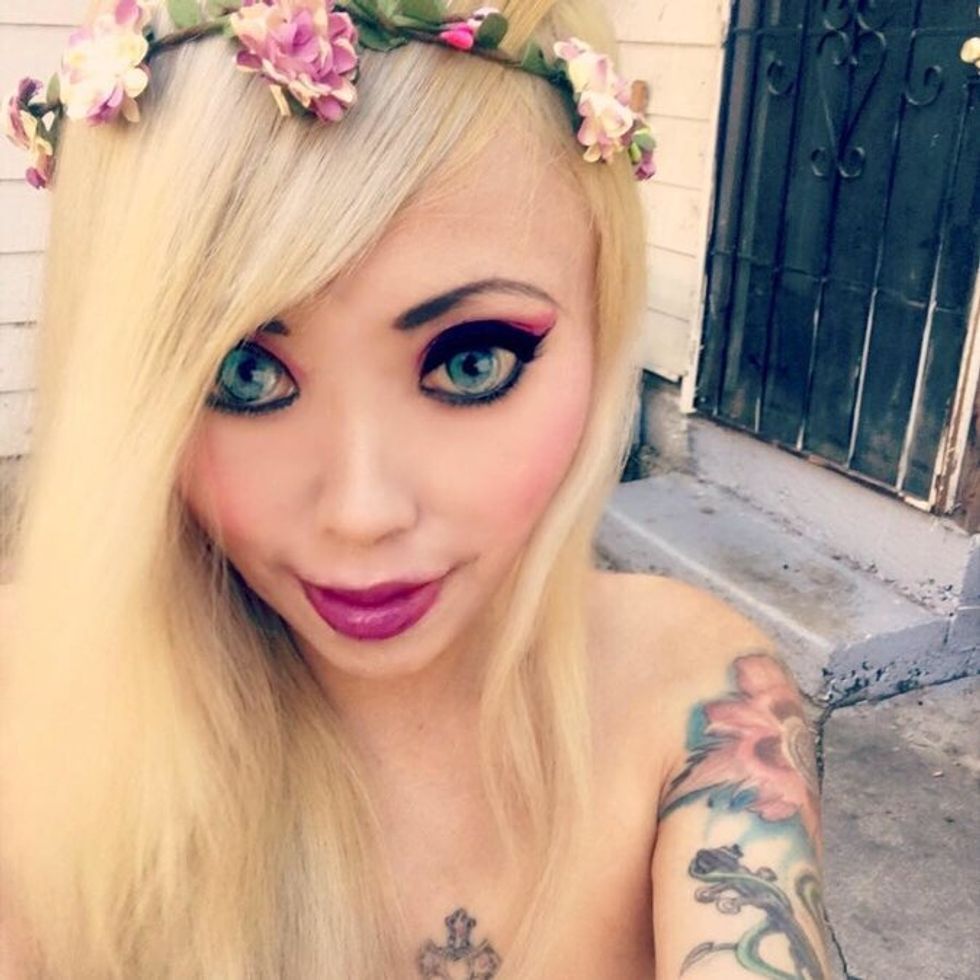 Ophelia Vanity, a thirty-year-old from Los Angeles, spent her teens dressing as a goth – wearing dark clothing and makeup.

But as she grew older, she wanted a drastic change and felt more drawn to the Barbie look.

"I've always been into Barbie," she told The Daily Mail. "As a kid, I'd get a doll every Christmas or birthday. I had a dozen or so and would play with them all the time."

That's normal, but what's a little less normal is spending more than $35,000 to transform into a "real life Barbie," as Ophelia has done.

In 2009, she had her first Botox injections in a bid to make her face expressionless, like a doll, and impressed with the results, she started having lip fillers to achieve Barbie's iconic plump.

She now gets Botox approximately every six to nine months, and that's just the beginning.

Non-surgical rhinoplasty, in which surgeons use injections to change the shape of the nose, was also part of her drastic transformation, as well as bleaching her formerly dark hair to look more classically Barbie.

She even wears oversized contact lenses to make her naturally large eyes even larger. "I don't go full Barbie every day," she explained. "If I'm just popping to the shops, I won't wear any makeup. " But let's not forget the 22-inch corset that she wears around her middle, either. Beauty, it seems, is pain.

Even with the huge investment of time and money she's already put into her dream, she's nowhere near calling it good.

"I'd love breast and butt implants, but I need to save money and make sure I find the right doctor," she said. "I'd also love either four or six ribs removed, like Pixie Foxx, a model who had the surgery a little while ago. I wouldn't go quite as extreme as her, but aesthetically, she's an inspiration."

"When I'm fully dressed up, which I do if I'm going to events or parties, I do get stopped and recognized on the streets of Hollywood," she said. "People are usually really positive, and want to talk to me or take pictures."

She's garnered support for her endeavor from family and friends, as well as from fans on her Instagram account, which has more than 36,000 mostly positive followers.

But it's not all pink and glitter, and she does deal with some negativity.

'There is a lot of cyberbullying out there," she explained. "I've been called ugly or had people say I'm delusional for wanting to look like Barbie."

"I'm not hurting anyone, though," she said. "I know I shouldn't put too much into these people hiding behind a screen, but I'm still human so it does hurt."

"I always ignore them," she continued. "I know they just want a rise. If they really hated me, they'd look away."