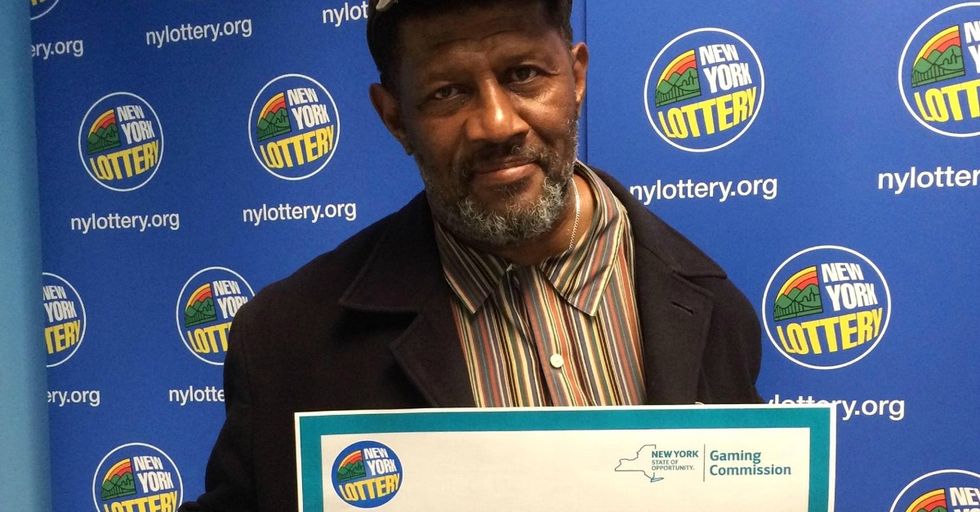 If you won the lottery, what would you buy first? Would you splurge on a sports car and 10,000-square-foot mansion? Or would you go the responsible route, putting it in savings or donating a large sum to charity?

We've all had our own lotto dreams during lean financial times, and while it can be fun to think about, no one actually expects to ever win.

But one man won without even realizing it, and because of some seriously crazy circumstances, was two days away from being just another dreamer.

Although he's been a regular buyer of lottery tickets since the 1960s, he had never been the type to check to see if he's won right away. “I always told myself, ‘I’ll check them when I have time,'" Smith told People.

So on May 25, 2016, when the New York Lottery announced the $24.1 million jackpot–winning numbers, he told himself the same thing.

While Smith planned on checking the tickets he'd bought a few days before the drawing, life happened. He just got sidetracked. Months passed, and while it was verified that someone had in fact purchased the winning ticket, still no one came forward to claim their prize.

Smith forgot all about the ticket until a special segment on the local evening news stopped him dead in his tracks.

It was about the New York Lottery’s efforts to find the mysterious winning LOTTO player before the one-year deadline came and forced them to forfeit the jackpot. Suddenly, Smith ran over to where he'd hung his favorite shirt, which had a pocket full of unchecked tickets. He quickly began rifling through them.

“I ended up with a stack," Smith said.

"A pile of tickets, including the one they were talking about on the news." “I stood there for a minute thinking, ‘Do I see what I think I see?’"

"I had to stick my head out the window and breathe in some fresh air."

"I was in serious doubt. I really had to convince myself this was real." Smith, the father of two and grandfather of 12, had won $24.1 million dollars. Nearly a year ago.

And what makes the story even more amazing?

Smith was right on the verge of the one-year deadline. If he had waited just two more days to find the ticket, it would have been too late. Thankfully, he found it right in the nick of time.

Smith said that he needed to take some time “to clear out some cobwebs" before claiming his prize at the Lower Manhattan Customer Service Center.

We're guessing that means he had to take a minute to have a complete meltdown at the thought of almost missing out on $24 million dollars. Or maybe he just had some cleaning to do. Who knows.

It's easy to imagine being in Smith's position and staring in disbelief at the winning ticket, which had been safely tucked away in his shirt pocket for almost an entire year.

Once he discovered his winnings, Smith was then left with the tough decision on how to accept the prize.

Would he take it all at once? Or get it in smaller payments over a course of several years? While many financial experts claim that the smaller payments are the smarter choice, Jim Cramer, the host of CNBC's Mad Money, urges winners to take the lump sum. "Take the money all at once," he said. "Don't let them string it out like that. You want the time value of all that cash working for you. That's vital."

While he still hasn't decided what to do with the enormous sum of money, he plans to have an “all-family discussion" about how to spend the cash. With 12 grandchildren, we're guessing it'll be put to good use.

During the fiscal year of 2016–2017, the New York Lottery has donated a huge sum of money to New York school districts.

An estimated $1,303,190,660 in "Lottery Aid to Education" was contributed to school districts in the five boroughs. Yet another reason to keep buying those tickets!