He shared the conversation on Twitter, and as you can see, people were grateful for their random and heartwarming exchange. | 22 Words 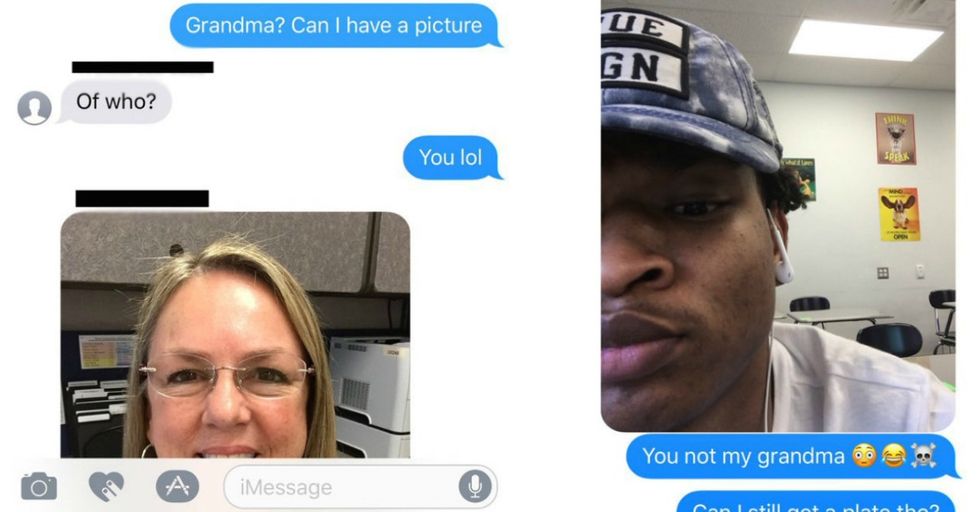 Thanksgiving is a time for friends and family, and 17-year-old Jamal Hinton, who lives in Phoenix, recently and unexpectedly made a new “friend" via text.

Earlier this week he somehow got looped into a group text from an unknown number detailing Thanksgiving dinner plans that included family members “Amanda" and “Justin."

Hinton was confused and asked who these people were, at which point the texter identified herself as “your grandma."

Hinton said he thought it was his grandmother texting him, but he was still a little confused, so he asked for a photo.

Turns out...Not his grandma. Not even close.

Hinton then laughed, and responded with his own selfie letting her know she’d reached the wrong grandson.

But just on a whim, he asked if he could still have a seat at the table on Thanksgiving (can't hurt to ask, right?).

To which not his grandma said, “Of course you can. That's what grandmas do." Hinton said that if the invitation still holds, he’d be delighted to join the family for Thanksgiving. “If I was invited to their Thanksgiving for real, yes, I would go," he said.

He shared the conversation on Twitter, and as you can see, people were grateful for their random and heartwarming exchange.

Hinton said he's getting back in touch with her via text to coordinate real, potential plans.

After all, what's one more plate at the table? Let's just hope Amanda and Justin still have a seat.

Mom Arrested After She Left Kids To Go To Work Given $165,000 in Donations