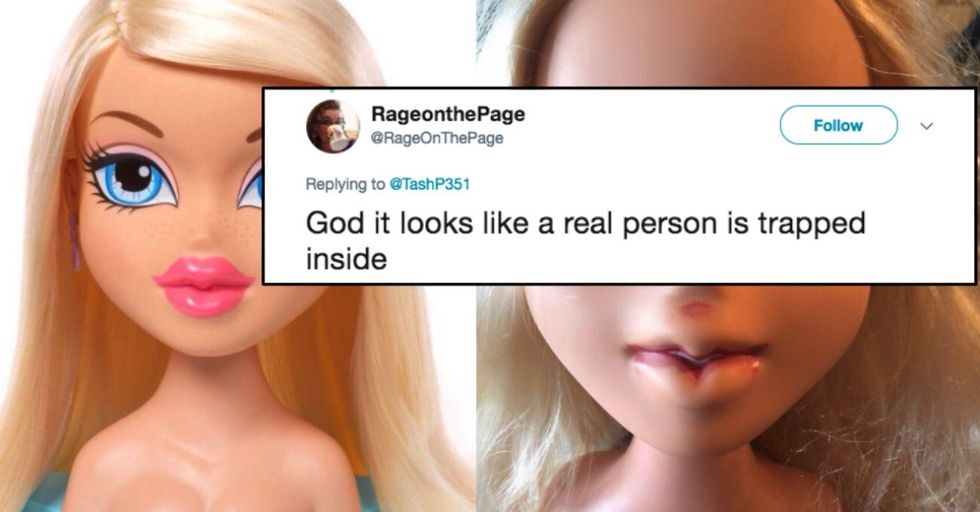 If you loved Annabelle and Chucky, this doll is right up your alley.

A British Grandpa tried to wipe some grime off of his grandkid's Girls World doll and accidentally removed almost all of the details painted on the dolls face. Since the doll then had no eyes, he replaced the huge painted-on eyes with tiny ones he cut from a magazine. It was a nice thought, but it only made matters worse.

Who knew that a bit of cleaning solution could have such terrifying results?

Her tweet now has almost 9,500 retweets and 25,000 likes. Even though his work is going to give us all nightmares, Twitter pretty much agreed that he is winning at the grandpa game. "Your dad is a hero. He's probably not winning anything at the annual 'dolls fest makeup' awards, but he's a bloody hero, all the same. Top dadding :)" said @pellvision.

Grandpa's restoration of the doll is hilariously similar to some other botched revivals.

This painting became a meme called, "potato Jesus" after an amateur art restorer in Borja, Spain restored a 1930s painting of Jesus Christ into...well, this thing.

Remember when a sculptor crafted this guy, who is supposed to look like Christiano Ronaldo?

The creator of this statue, Emanuel Santos, defended his work, saying, "It is impossible to please the Greeks and Trojans. Neither did Jesus please everyone." Apparently, it took 15 days to make. Um, okay. The doll doesn't even hold a candle to this masterpiece.

This is what the Girls World doll looked like when Tashy's daughter first got it.

The eyes are a bit large and we've got a slight issue with the fact that her makeup is permanently painted on, but hey, a lot of industries have some work to do when it comes to beauty expectations for women.

The finished product is nothing like that photo above.

It looks like either a demon has entered the child's doll or a picture of me after I take my make-up off Saturday morning. Both are terrifying. Behold...

This is how a horror movie starts.

Tashy wrote, "When your dad tires to clean up your daughters Girls World with white spirit, but it completely takes the eyes out so he sticks some on from a magazine." Removing the eyes somehow made the entire shape and proportions of the face look entirely different. So... at NO point in the process of washing the dolls face off, looking through magazines for eyes, cutting out those eyes, and then gluing those eyes onto the doll's face did the grandpa stop to think THIS KIND OF LOOKS LIKE A SATANIC SPIRIT IN DOLL FORM?

The lack of eyebrows and lifelike eyes truly make it look like someone is peering out from inside of the doll's shell.

Get out of there! Begone, Satan! Twitter user @InkanaStudio replied, "I'm laughing so hard (but it's mostly nervous laughter)". Us too.

If there ever were an appropriate time for this GIF of Dwight repurposing the face of a CPR dummy, it is now.

Lucas somehow made us feel even more uncomfortable when he said, "when ur doing the dishes and feel something slimy in the sink". We'll be sleeping with the lights on tonight.