We don't think Brooks has made a Twitter account yet, but other Twitter users are Tweeting in his honor until he can get one up and running. | 22 Words 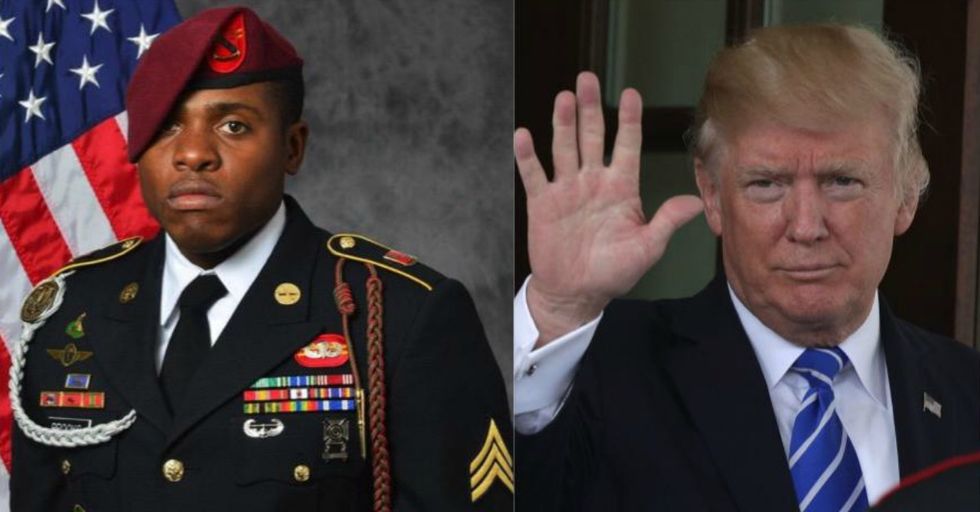 President Donald Trump stuck his foot in his mouth multiple times recently while communicating with grieving with military families. He told one woman that her deceased husband knew what he was getting himself into when he signed up, which is an incredibly insensitive thing to say to a grieving widow.

Trump claimed to have called all grieving families of soldiers who had died while he has been in office. Trump said he has, "called every family of somebody that's died, and it's the hardest call to make." According to the Washington Post, twenty soldiers have passed since he's been President. They interviewed thirteen of those families and found that just half of those thirteen had received phone calls from Donald Trump.

So he claimed to have called twenty people, but in reality, he's only talked to about six.

One of the fathers of those forgotten gold star families wants to speak out.

He lost his son, Sgt. Roshain E. Brooks, and never got a call from Trump, he told the Washington Post. He didn't want to be ignored.

He asked his daughter to teach him how to use Twitter just so he could tell Trump what he thinks of his actions.

He told the Post, “I said to my daughter, ‘Can you teach me to tweet, so I can tweet at the president and tell him he’s a liar?’" and then, “You know when you hear people lying and you want to fight? That’s the way I feel last night. He’s a damn liar."

Brooks aired his frustration with Trump's incorrect comments with the New York Daily News: "He’s a damn disgrace to the White House. I’ve been here for 17 years. Presidents George Bush and Obama, none of them behaved like this guy. This guy is a damn lunatic."

Brooks' son was a thirty-year-old Sgt. who died on August 13 in Iraq. He and Spc. Allen Levi Stigler, who was killed in action alongside him, were awarded the Bronze Star, Purple Heart, Meritorious Service Medal and Combat Action Badge after their deaths.

We don't think Brooks has made a Twitter account yet, but other Twitter users are Tweeting in his honor until he can get one up and running.

Twitter user @HawaiiDelilah said, "Let me help, Mr. Euvince Brooks... Trump is a damn liar." Many other Twitter users followed suit, asking Brooks if he had made an account yet and calling Trump out for shamelessly lying.

...to replace the silence from the president. "Sgt. Roshain" Euvince Brooks and Sgt. Allen Levi Stigler Jr. Thank you for your service. Prayers to your family and close friends #RIP" Nasir C. Quadree wrote.

Americans have expressed sympathy, condolences, and thanks to the family. The president's silence is deafening.

He's too busy tweeting about what he thinks are more important things. For example, this morning he tweeted about a pee tape.