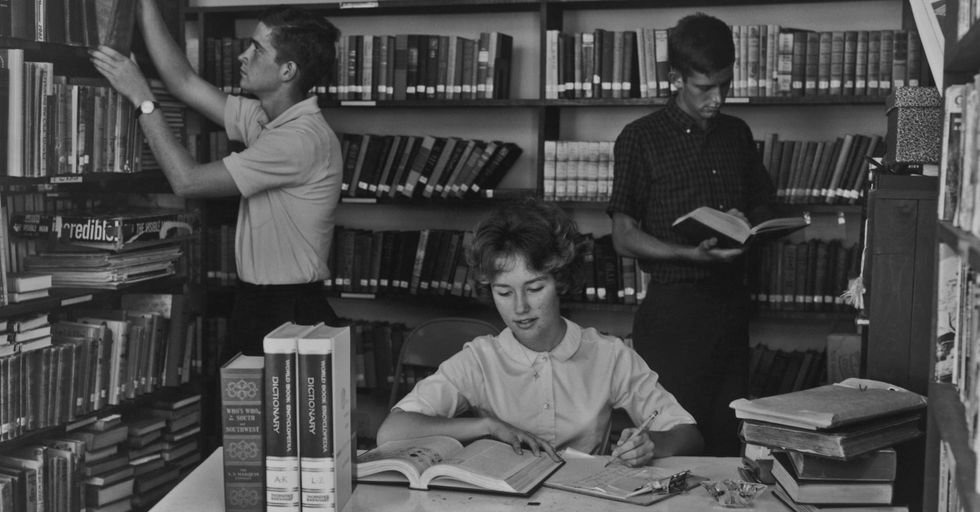 Public consumption of literature is nothing new. Since the printing press was invented, humans have been eager to get their hands on great reads — books, magazines, what have you. Modern technology has made reading even more convenient, and we're now able to access pretty much anything that's ever been written in seconds.

Companies like Amazon, Google, and Apple make it easier than ever to purchase any book, with a download always being a few taps and a credit card payment away. But there is one tried-and-true way to enjoy books that is — and always has been — 100 percent free.

The library! One grown man recently discovered how libraries really work, and took to Reddit with a post beginning: "I feel like an idiot." Keep scrolling to read this hilarious true tale.

History dictates that, as long as we can get our hands on it, we want all the reading material.

Getting our hands on books wasn't always easy, but that never put a damper on our obsession with soaking up knowledge. From monks transcribing ancient texts to Gutenberg rolling out his famous printing press, humanity has always had an itch for the written word. Literature has been around forever — and it isn't going anywhere.

And when we're not beefing up our thought catalogues, the written word is a great escape.

Books aren't solely for brushing up on information. Picking up an amazing novel and mentally traveling to another time and place is one of the most relaxing activities on the planet, and it's a lot cheaper than a therapy session. Our lives may be filled with stress at times, and diving into a fictional world for an hour or two can be a very welcome respite.

Some of us can even get a little too attached to our favorite books.

To voracious readers, literature isn't simply a "one and done" type of thing. Characters and plots have a way of sticking with us, and that's a beautiful thing. So while books are an escape, the people we meet in the pages can also feel like they're keeping us company. It's not unusual for a super-fan to read their favorite book read six, seven, or eight times.

Then technology stepped in and upped the game for readers everywhere.

What's better than tons of available literature? The answer, of course, is having it delivered right to your door. With the dawn of computers, bibliophiles could shop for, discuss, and basically obsess about books online — constantly. Book retailers were more than happy to hop on the e-commerce train, boxing up books and shipping them around the world. And consumers were equally happy to whip out their credit and debit cards.

When the Kindle was born, we about lost our minds.

Were e-books books? Or not books? In the end, it really didn't matter, and digital downloads took the bookworm community by storm. Some said abandoning actual paper books was akin to blasphemy. Others embraced it and charged full-speed into yet another way to buy books online, except this time, they could be reading a new title within seconds. Purchasing a book without leaving the house is one thing. But the ability to buy one and read one pretty much instantly? Awesome.

While the ability to instantly buy books is amazing, this man came along to remind us that sometimes, the good things in life are (shockingly) free.

Often lost in the flurry of e-books and instant online downloads is the humble old local library. Recently, one man drew attention to the fact that these bastions of research, reading, and local educational programs are often grossly overlooked. The kicker? They're all free.

He was quickly schooled in all the library has to offer.

Fellow Reddit users, to their credit, were kind but eager to inform the original poster about all the library has to offer. This responder was all too happy to rattle off a ton of useful things both librarians and the library itself have to offer the general public. With such an extensive list, it's easy to see how much of the public has overlooked these amazing benefits.

The list kept going, and everyone had something interesting to add about their local library.

This user pointed out that libraries offer extensive collections of other types of media beyond books. Music downloads are not uncommon and many libraries have huge collections of albums on file. For years, many institutions had audio tapes and CDs the public was welcome to borrow. Many institutions have since gone digital, and any cardholder can take advantage of whatever tunes and artists pique their interest.

This user did a great job of giving a shoutout to hardworking librarians everywhere. It's a common misconception that the individuals who staff the library are simply there to tell patrons to be quiet. In reality, it takes a master's degree in library and information science to even apply for a true librarian position. Librarians are phenomenal at research and tend to be wizards at gathering information, helping others organize projects, and running the business of the branch itself.

Librarians were thrilled to get a little recognition.

Those who were hanging out and commenting on the thread were psyched that people were talking about their libraries. This librarian showed some super sass and implied that even the most difficult research projects couldn't stump her. Because, as another librarian commented, "There's still a ton of information available in books and journals and other printed media that just isn't available on the internet yet, or is not easily accessible. If someone tries to do serious research on the internet alone, they're gonna miss out."

With everything the local library has to offer, don't be scared to go back.

Even though they were excited by everything the library has to offer, a few Reddit users were afraid to drop by because of long-overdue books. A couple more seasoned library patrons eased their fears, explaining that fees aren't nearly as bad as people think they are. So don't be afraid of owing a huge chunk of change for that copy of Pride and Prejudice that's been at the bottom of your backpack for a year. Just head on down to the local branch and enjoy some free enrichment. We know we will.