Many people thought that there would be a football reference at the end of the original poster's comment. | 22 Words 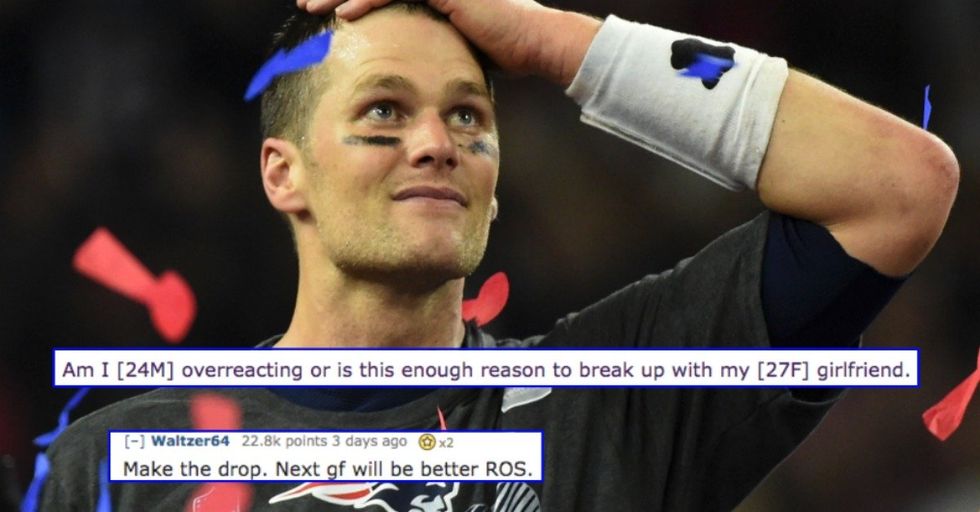 One man asked the Internet for help when he was having problems with his girlfriend. But instead of posting his message into a relationship help chat group as intended, he accidentally posted his drama into a fantasy football Reddit thread.

Some responses were hilarious and poked fun at the original poster. Others actually came to the man's aid with some thoughtful and helpful advice, despite the fact that he posted the comment in the wrong group.

The poster asked about some issues he'd been having with his girlfriend.

He said that his long-term girlfriend was constantly late for dates and other events. He'd schedule a dinner with friends, and she'd show up hours late after the food was cold, the movie was over, or his friends were gone. Seems like a pretty annoying habit, no? But he obviously was with the woman for a reason. He struggled to weigh the pros and cons of staying with her as her chronic lateness was starting to weigh on the relationship. Breaking up with someone for being late seems petty, but when it starts to happen every single time you hang out, it's exhausting. Mistakes happen, but constantly disregarding someone's time over and over is rude.

Reddit user Chilo69 responded with an answer that was half advice, half fantasy football joke.

Translated from football terms, he said, if you break up with her and she starts dating one of your friends, would you be upset? If so, it might be worth trying to work out your problems and seeing if she can make some changes that pay off in the long haul.

But Reddit user Jackcatalyst had some issues with Chilo69's advice.

They said that just because you train someone to make changes for a couple of weeks, it doesn't mean that the player is going to change forever. At the end of the day, they're the same person with the same tendencies, and will eventually go back to their natural ways.

"Make the drop. Next gf will be better ROS," they wrote, meaning that another girlfriend would suit the original poster better for the rest of the season that his current one.

More people chimed in with some fantasy football advice.

They debated whether or not he should let his girlfriend *cough* player *cough* go and then pick her back up again in a couple weeks. Most agreed that that's too risky of a play. You'll want to see some quality relationship advice and the original posters response to all the activity on their thread....

Many people thought that there would be a football reference at the end of the original poster's comment.

It was a fantasy football chat, after all. Alas, the only twist was the one in the original poster's heart when he realized that his girlfriend would be late for dinner yet another time.

Although some people had argued otherwise, this person said that you might be able to train friends to be on time.

They said that their partner was also constantly late to events. One day the commenter left without his wife, and she started shaping up. He had to set a boundary: if you're not ready, you miss out. It doesn't seem as if they do this all the time, but only when there are hard deadlines or friends involved. Someone else replied and warned that this is a good idea as long as it's a learning opportunity and not a chance to be petty. It's helpful if you're communicating about why you're upset, but not helpful if you're just lashing out and starting a fight.

Some people thought the previous comment sounded more like a problem in a math book than a real-life group of friends.

If the original poster and his girlfriend were going to a movie at 9pm with Jack and Jill, but they were traveling on trains coming from different directions, would the girlfriend and boyfriend arrive at the same time? No, the girlfriend would still be late. In all seriousness, it seems like the original poster decided to respectfully stand up for himself and set some boundaries. He said that he would try talking to her about how her actions affect him.

A few hours after the original poster wrote the message, he came back to the thread to see that his post was blowing up.

He also realized that he posted his comment in the wrong group. He edited his message and wrote that he actually got some good feedback. He said, "I have more than enough feedback to know what to do. Also, thanks to the [Reddit] fantasy football community... although I didn't mean to post here, I can see the bond this ... gives us. I am also very sorry such a a rididculous post that has nothing to do with FF has made it to the top." And then, "...I'm really just a dude who was looking for relationship advice. Well, I clearly found it."

Self-Proclaimed 'Catfishes' Reveal What They Look Like in 'Real Life'