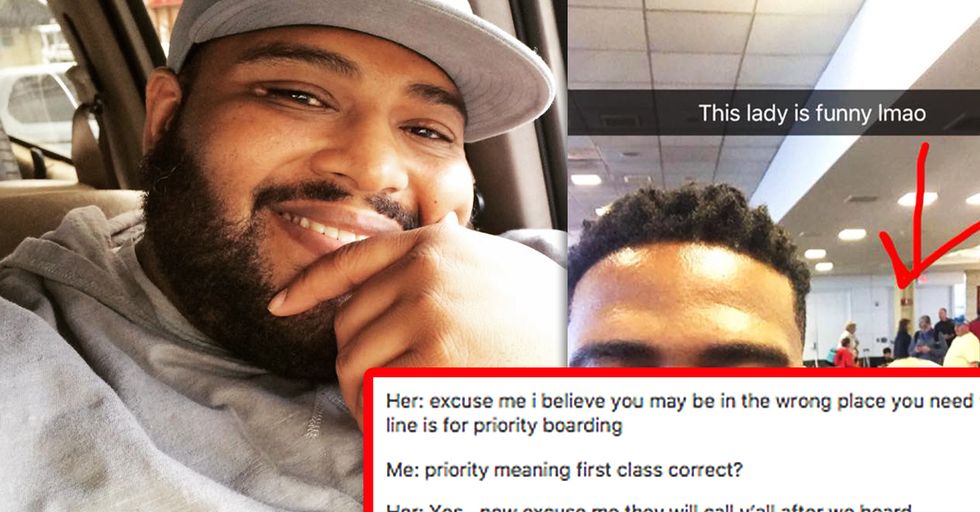 Unless you've been living under a rock (and honestly, probably even then), you know that casual prejudice and blatant racism are alive and well in the United States of America in 2017. And unless you're a hermit, you know that air travel is tough, stressful, and generally much more trouble than it should be.

So could you imagine trying to travel while also being the victim of nasty bigots? It can't be fun. Luckily, Emmit Walker seems like a chill dude.

Racism is pretty much everywhere these days. It's even being mailed to our homes, like this postcard about a New Jersey school board election.

"Stop Jerry Shi & Falguni Patel from taking over our school board," it read. "The Chinese and Indians are taking over our town! Chinese school! Indian school! Cricket fields! Enough is enough!" Shocking, right?

Well, we should stop being shocked. Unfortunately, overt racism is everywhere.

This emergency room doctor from Oregon shared an appalling thread on Twitter about how she's dealt with patients in life-threatening situations who refuse to be treated by her because she is Asian. Some people's racism is literally stronger than their will to live.

Then there was also that time that People's Sexist Man Alive for the year, Blake Shelton, was outed as a racist, homophobic, and misogynistic sexiest man alive.

And yet, he remained the Sexiest Man Alive, at least in the eyes of People Magazine. (Most people had quite a different opinion on the matter.)

On this box of Corn Pops, there's only one brown pop (in the bottom right quadrant), and it's the pop dressed in the janitor's outfit cleaning the floor. C'mon people. We have to do better than this.

This is the latest victim of egregious overt racism to make the news. His name is Emmit Walker.

Walker is a music executive from Washington, D.C. He recently shared a photo of a beyond unreal encounter he had with a racist in line at the airport. He handled it like a champ, but he shouldn't have had to handle it at all. Read on to see how Walker defeated the racist white lady at the airport...

On December 5, Walker posted this snap to his Facebook with the whole story.

"This lady is funny lmao," he wrote, with an arrow pointing down at a frazzled-looking blond woman. Walker recounted the experience: "Her: Her: excuse me i believe you may be in the wrong place you need to let us thru. This line is for priority boarding. "Me: priority meaning first class correct? "Her: Yes...now excuse me they will call Y'all after we board. "Me: *shove first class priority boarding pass in her face* you can relax ma’am I’m in the right spot, been here longer, so you can board after me."

But his boarding pass and his place in line weren't enough for Crazy Racist White Lady (as we've dubbed her) to accept that this black man could legitimately belong in first class.

The encounter continued... "Her: *still won’t let It go* he must be military or something, but we paid for our seats so he still should have to wait  Me: nope too big to ever be in anybodies military. I’m just a n***a with money

Walker kept incredible composure and let this lady have it.

And boy did she deserve it! What nerve. If you're not fuming on behalf of Walker in this situation, you're doing this whole "being a decent human being" thing wrong.

Luckily the people around them witnessing the whole awful exchange were angry.

According to Walker, everyone waiting in line started to clap when he shut this woman down. As they should have. He was incredibly composed and chill through the whole thing. We imagine it's because this sadly probably wasn't the first time a white woman made an assumption about him that she shouldn't have.

Emmit Walker is a hero among men.

And he deserves all the accolades. As for Crazy Racist White Lady, let's just say she's lucky her head was bowed (in shame, we hope) when Walker took that picture.