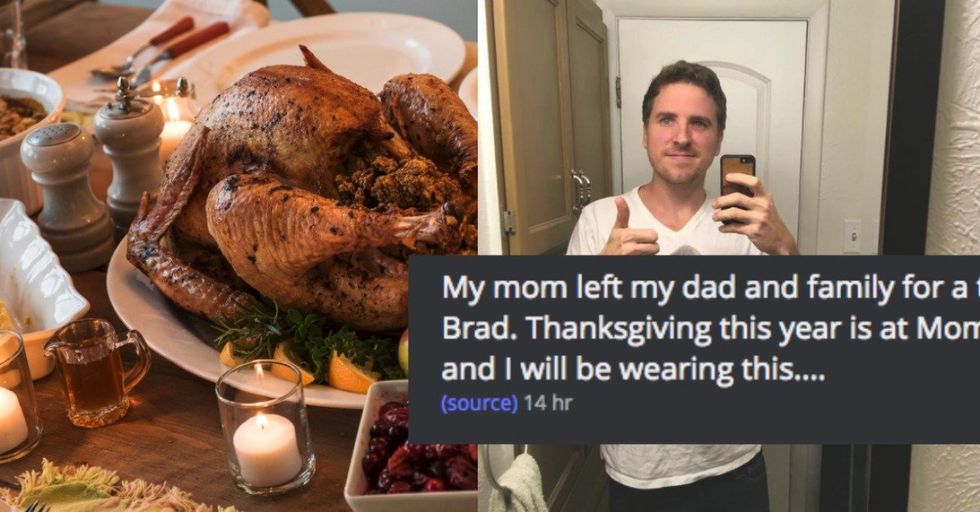 The holidays can be a stressful time, whether you're driving miles to get home on time, rushing to get gifts for everyone, or planning and preparing a feast for what seems like half of your neighborhood. Some families have nothing but lovey-dovey conversations over Thanksgiving dinner, but others find themselves in heated debates and disagreements that they'd rather not hash out over and over again each year. While most people tend to shy away from conversation topics that spark controversy at the dinner table, one grown man just wanted to see the world burn...

He said that his mom left his dad for "a total a**hole named Brad." He's planning on wearing this very specific shirt to Thanksgiving dinner at his mom's place.

Can you guess who the guy on his shirt is?

It's his dad. He's planning on wearing a shirt with his dad's face on it — his mom's ex-husband — to Thanksgiving dinner with his mom and her new boyfriend.

Someone replied to his post, writing, "Brad, can you pass the DRAMA."

The drama will be passed, indeed. One reddit user wrote, "Well, that's a surefire passive-agressive [sic] way to make sure Thanksgiving will be a disaster. Let us know how it works out." To this, someone replied, "Be warned, it's salty." Brandamonium said, "Cranberry sauce and revenge are best served cold."

Some people were skeptical about whether Brad would actually wear the shirt to dinner.

They questioned whether he should wear the shirt to dinner too, for the sake of his poor mom. But why doesn't trexradar87 just make things easier for himself and spend Thanksgiving with his dad?

But most people thought the idea of it was funny enough on its own.

If he does actually wear the shirt, we'd love to hear how it all goes down. Hit us up on black Friday, please, trexradar87!