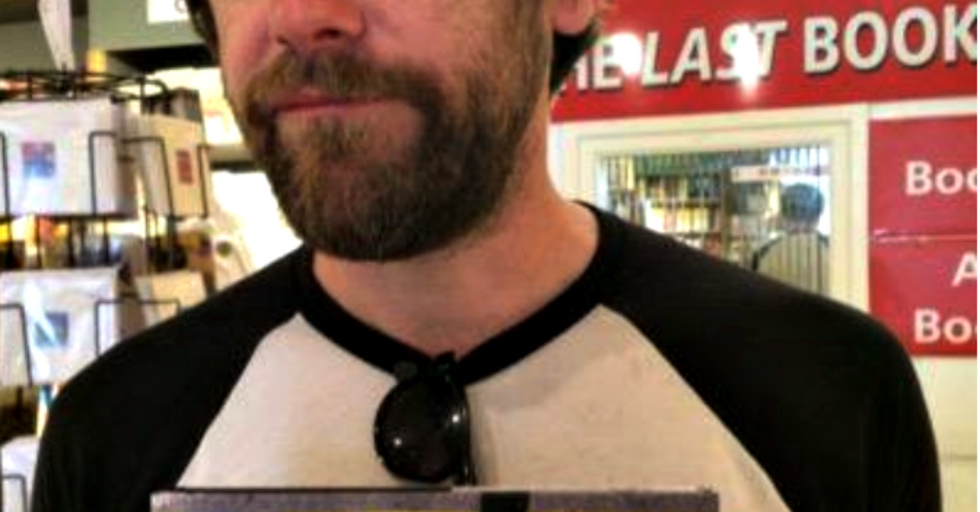 Trying to open a bottle of beer without an opener?

Well, get that bottle out of your mouth RIGHT NOW because we have some information that will change everything you thought you knew about drinking in public.

This is not a drill, people!

This is Patrick Dalton, a resident of London who describes himself on Twitter as an "Author/Photographer/Nerd". Speaking of his Twitter account, we'd suggest checking it out, because it's filled with some pretty bizarre stuff that Dalton has captured during his travels. Like, for example, a hummus shop that also sells creepy porcelain dolls. A natural combination, right?

He published his first book, Shit London: Snapshots of a City on the Edge, in 2011.

Take, for instance, this rare sighting.

A cat managing a bird shop? That's a recipe for disaster. Also, the sign includes a small footnote that states "NO PICTURE TAKING ALLOWED," so Dalton took a pretty big risk snapping this photo.

And this is just sad.

Let's hope that the residents of these apartments are too far gone to realize the rather insulting name. Although I guess it could be worse. At lease they didn't call them "Last-Stop-Before-Death Apartments." That would have crossed the line.

But the reason Dalton is being hailed as a hero has nothing to do with his books.

It's because he's solved an issue that commuters have been struggling with since the beginning of time: How do you open your beer while on public transportation? His solution is nothing short of brilliant.

It's a frustrating position to be in, to say the least.

You're on your way home from a stressful day at the office and you just want to relax with a cold one on the train, but alas, you have no bottle opener! What do you DO?! Do you try the old tooth method flawlessly demonstrated above? No. You do not. You'll break your teeth.

Dalton, however, came up with something genius.

This "life hack" involves pressing the bottle cap into a groove in the ceiling of the train until it pops open. *MIND BLOWN.*

Needless to say, Dalton was pretty proud of his discovery.

In case you don't know who Ray Mears is, he's an English woodsman and instructor who's written several books and made TV appearances teaching his survival techniques. Looking to learn how to bushcraft? We recommend his book Essential Bushcraft.

Dalton later downplayed his achievement to "The Fonz" level, which is no less impressive.

This is exactly the type of trick Fonzie would show off to the crew on Happy Days. Possibly while jumping a shark.

Not surprisingly, Twitter was in awe of Dalton's smart thinking under pressure.

"Bloody genius!" said user Fliss Denham. "Now we all know #gamechanger." Although many pointed out that this was in no way a new discovery. "Get out of town this is not a new discovery," said one unimpressed user. "I knew that years ago. Just didn't make a video :-)" said another.

Sadly, the story had a bit of a bittersweet ending.

@SouthernRailUK Left the train to discover I've lost one of the rubber bits from my earphones. The Lord giveth, the Lord taketh away.
— Patrick Dalton (@Patrick Dalton)1510610892.0

But it's a small price to pay for discovering something so life-changing. Wait, is drinking even allowed on public transportation?