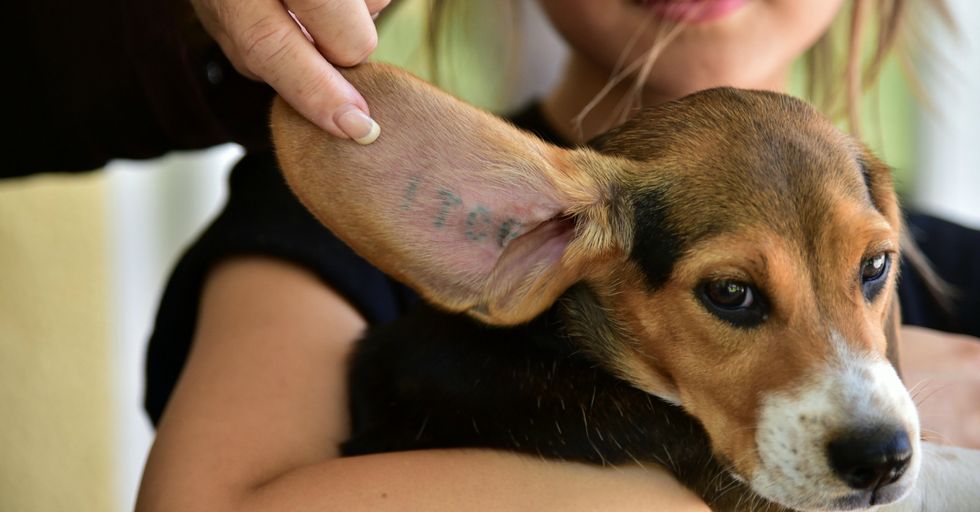 Most people love their dogs so much that they'd do just about anything for them. But would you go so far as to get a tattoo that matches the one on your pup?

A 26-year-old Texas man did just that. But after he found out what the tattoo actually meant, he might have started to regret his decision.

So, what did the tattoo actually mean?

Dogs have a way of filling our hearts, homes, and lives with love.

They complete your family and act as that one non-judgemental friend who doesn't care if you haven't showered in a few days or how good your SAT scores were. They mostly just care if you have treats.

Rescue dogs are especially cherished since many of them have had less-than-easy lives before being adopted.

With the estimated 10,000 puppy mills across the United States, there's no telling what kind of horrors most rescued pups have seen in their lifetimes.

So when Chris Mendiola adopted his rescue dog, Bear, in 2010, he was enraged when he noticed something etched onto his pup's lower belly area.

It was a small circular tattoo. "I just thought, wow, that kind of sucks," he told Buzzfeed News. Mendiola said that Bear "bounced from home to home" before he ended up with his family, and he had no idea who had given him the tattoo.

So, in a heartwarming gesture of solidarity, Mendiola decided to get inked with the exact same symbol.

On Saturday, September 23, he posted a photo of the finished tattoo. Now Mendiola and his BFF would truly be bonded for life. "For those of you who know bear know that he has a tattoo given to him from some previous owners. It sickens me to know that people actually tattoo their pets. So tonight I got his tattoo," he wrote in the post.

It was an incredibly sweet move.

Or, at least, the idea of it was sweet. It wasn't until the post went viral and comments started pouring in revealing the true meaning of the tattoo that it started seeming not-so-sweet. We're pretty sure that Mendiola wishes he would have just bought matching friendship bracelets instead. So, what was it?

The symbol is commonly used to signify that a dog has been neutered.

Ouch. We can't help but notice that a quick Google search would have saved poor Mendiola a whole lot of grief and humiliating Internet fame.

Of course, the neutered jokes have come pouring in from multiple different websites.

But the most shocking thing about the whole story? Mendiola claims that he knew the meaning of the tattoo before getting inked. "We talked to our vet about the tattoo. I knew what it meant," he told Buzzfeed News. Although we'd like to believe him, this may have just been a face-saving tactic.

He went on to say that he "knew what he was getting [him]self into" by posting the now-viral photo.

The jokes also don't bother him at all. "They can believe and say what they want," he said. "But the tattoo is not for them, it’s for me."

"I get to carry my dog with me everywhere I go," he added.

"I can just look down and know I have a part of him with me at all times." He also said that the tattoo shows that he would do anything for Bear, who he calls his "best friend."

"A lot of people are saying 'I'd do anything for my pet,' but would you?" he asked.

"Would you get a neutered sign tattooed on your bicep?" We can honestly say that no, we would not. But we appreciate the sentiment.

We think this user summed the situation up best.

We couldn't have said it better ourselves. Also, de-bollocked is a great word. We're totally going to steal that one.

All jokes aside, it was an incredibly sweet tribute, and the bond between Mendiola and Bear is obviously a tight one.

And Bear is one lucky pup to have found an owner that would do something so extreme in order to feel close to him. "I don’t think that people should crop ears. I don’t think that people should cut tails off their pets. If they’re going to be a member of your family, you should treat them as such. I don’t see tattooing your dog as something that you should do... My vet would never just say, "Hey, willy-nilly, I’m going to tattoo your dog." It’s not going to happen," Mendiola told Gizmodo. ...but yeah, it's still really, really funny.