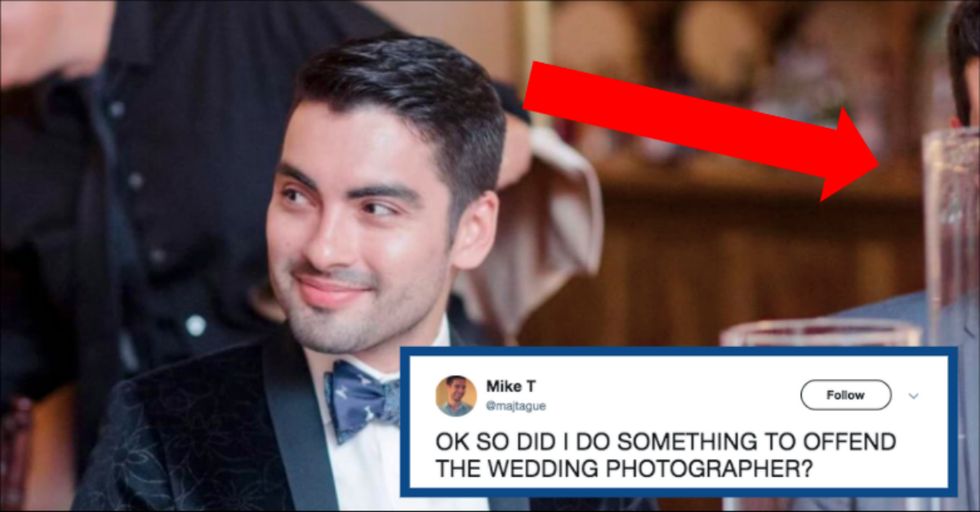 We've all taken an unflattering picture or two (or 2,000). If you're lucky, those unbecoming images live in your camera roll and never see the light of day. But if you're Mike Tague, you might find yourself wondering whether you've made the grave error of offending the photographer. Last week, he shared a picture of him from a wedding he attended and honestly, we're starting to wonder what the photographer had against him, too.

This is Mike (Left) with his boyfriend Andrew.

Earlier this year, Mike and Andrew were invited to the wedding of one of Mike's friends. The two of them were ushers for the big day.

They both got dressed up and had a great time at the Pennsylvania ceremony.

The bride immediately sent this photo to Mike:

As you can see, his head is hilariously shrunken by an optical illusion involving the vase on the table. Where'd ya go, Mike? Naturally, Mike started to question whether the photographer had some sort of vendetta against him.

And of course, people are loving the image.

The tweet quickly went viral — it already has over 200k likes. So much forehead. So little face. It's really hilarious.

People couldn't resist comparing him to a number of pop culture figures (none of them flattering).

"People have compared me in the photo to MegaMind, Zordon, Jimmy Neutron, and Roger the alien from American Dad," Mike said. What a group to be included in!

Mike didn't fail to see the hilarity, either. He's been a very good sport about the whole thing, even sharing his own comparisons.

Plus, he has plenty of photo evidence to back up the fact that he's a good-looking guy. When there aren't any vases around, anyway.