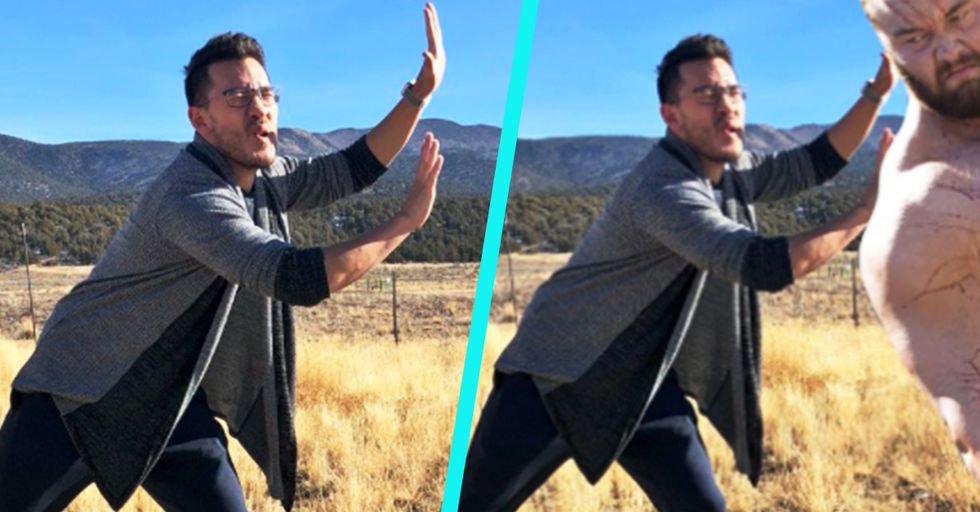 The Internet is an incredible fount of knowledge. Basically everything humans have ever discovered throughout history is readily available with just a few clicks around the World Wide Web.

In addition to some amazing factoids though, the Internet can also teach you important lessons about life. For instance, it will teach you that you should never, ever ask people on the Internet for help Photoshopping your personal photos.

One man had to learn this the hard way.

He'd posed in front of a mountain range, but didn't quite get the perspective right. He wanted to make it look as if he were holding up the mountain, so he asked the Internet for help.
It was a pretty simple request. Unfortunately for him, the Internet doesn't do super well when it comes to simple requests.

Like this one, which shows @Markiplier (we'll go ahead and refer to him as Mark for the rest of this article) holding up The Mountain. As in, Gregor Clegane from Game of Thrones. On one hand, this definitely isn't what Mark had in mind. On the other, at least his head didn't get smashed...? We know Gregor is capable of such things.

Mark was not amused.

And of course, the Internet as a whole got together and apologized for misunderstanding his request and immediately provided the correct solution to the problem. Just kidding. This is the Internet!

Ahhh, that's more like it. Mark continued to get even more bizarre images. Some of which took his request way too literally.

Like this person, who did add a "Mountain" to the image.

A Mountain Dew, that is. This is probably a more refreshing option than whatever Mark was asking for anyway, right?

The. Mountain. There it is! Pack it up, people. This Internet problem has been solved!

Then there were the more abstract interpretations of Mark's request.

Mountains are large rocks... This picture of The Rock is large... The logic is sound, guys!

This person completely missed the point.

However, they were able to recreate an image that basically every tourist in Italy tries to capture. That's gotta get them points, no?

This person is so close...in some ways.

And so far in so many others. Why has Mark's torso disappeared? Why does Mark have only one arm? But the Internet was still not done! These next few are our favorites...

This person went in a completely different direction.

And we have to say we really love it. High-fiving a dog is way cooler than holding up a mountain!

And this? Well, we don't really know what to say about this one.

It certainly does...exist. So there's that.

This person seems to have come the closest to Mark's original request.

And yet, we're pretty sure this isn't what Mark had in mind. But if we were him, we'd probably just take this one and run with it.

This Photoshop wizard put Mark in a completely different location.

It looks pretty realistic! And also completely wrong and not what Mark was looking for at all.

In the end, this was our favorite Photoshop response:

Because if the Internet isn't going to be your friend (and trust us — it isn't), then you can be your own friend. And that's better than any dumb ol' mountain, anyway.