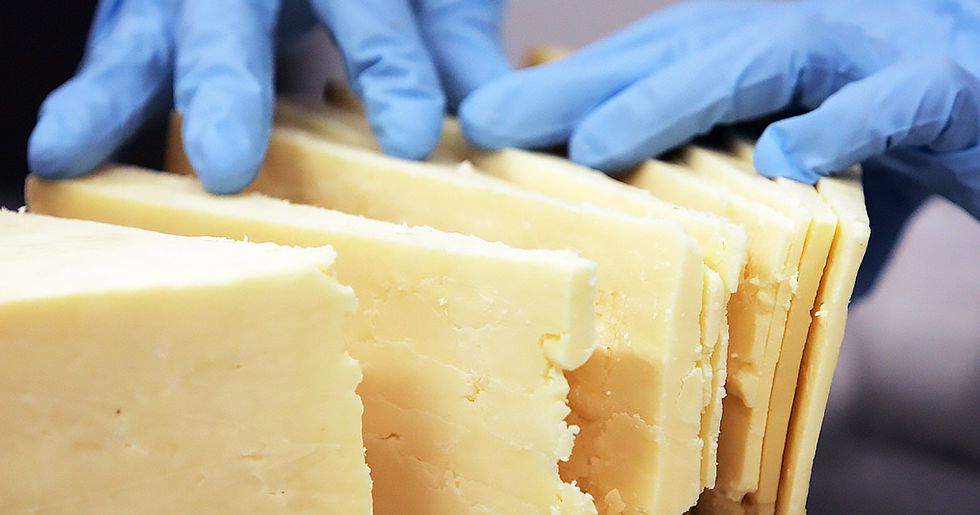 This Museum Displays 'Human Cheese' Made From Celebrity Skin Bacteria

So which kind of artist do you think we're talking about when we say there's an art exhibit about making human cheese out of bacteria they've collected from various celebrities?

In an absolutely fascinating but still kind of stomach-churning project, an artist teamed up with a biologist to make cheese out of human beings. What point are they trying to make? And could that point be the first time understanding an art project... actually makes an impact on our lives?

We all want to be famous.

How great would it be to have screaming fans wherever you went? Plus, if you were famous and your kidneys ever failed, you'd almost for sure have a fan willing to give you theirs.

But if you've ever watched a VH-1 Behind the Music...

And as someone who deeply loves to revel in schadenfreude, you know I have. When celebrities are sad and I'm not? Ooh baby, I'm in Heaven!

You know fame isn't everything it's cracked up to be.

Alas, there are some pitfalls to being a famous Hollywood celebrity. It's not all cashing giant royalty checks and meeting crying children who love you at mall autograph signings.

You can't go out in public.

If you're famous and someone sees you out and about, I promise you that they will scream and they will ask for a selfie and it will be annoying.

Gossip sites will devote pages and pages to your breakup and somehow, whatever you decide to name your baby will run on the cover of People.

And once you make it to the top, you have to fight to stay there.

Oh and also some guy might make cheese out of you.

Flaky skin, belly button lint, and that stuff between their toes is all fair game for these artists to find and use to make cheese. (Hey, that's a brand new sentence.)

The exhibit is called Food: Bigger Than the Plate.

The show is focused on food and features many different exhibits on the manufacturing and ideas behind what we eat, as well as asking questions about sustainability.

And was created by Christina Agapakis, who is a biologist...

In whatever way she can, Christina Agapakis is looking for ways to educate the public on microbes. On her website, she says she collaborates with "engineers, designers, artists, and social scientists to explore the many unexpected connections between microbiology, technology, art, and popular culture."

... and Sissel Tolaas, a smell artist.

Sissel Tolaas Has spent her life devoted to smells, including one project called SWEAT FEAR | FEAR SWEAT. According to her Wiki page, Tolaas would examine "the body odors of twenty men, all of whom have a severe phobia of other bodies."

Before we get into the whos and whys of the project, here's a quick primer on how human cheese, and cheese in general, is produced:

To make cheese, milk must be combined with a bacteria and then become a curd. In a blog post, the Victoria and Albert Museum said of the process, "As the bacteria break down the emulsion of sugars, fats and proteins in the milk, the proteins start to clump together into soft curds, separating from the liquid whey."

But there's one added level of weirdness to making cheese worthwhile to me:

The blog post went on to say, "next [is] rennet, a cluster of stomach enzymes that helps young animals digest their mother’s milk, is added to further break down the proteins and solidify the curds. Once drained and pressed, the curds can be processed into the huge variety of cheeses found around the world." So whenever I eat cheese, I'm also eating the same kind of chemicals that help baby animals eat mother's milk? Uh, gross.

One bacteria leads to mozzarella, one to cheddar cheese. I don't know what bacteria produces nacho cheese, but by god, I'm gonna find out.

But the thing is, the bacteria making up the Victoria & Albert Museum's cheese comes from human skin.

That initial, cheese-defining bacteria is coming from these hand-picked London celebrities. We're talking armpits. We're talking feet. We're even talking crotch. Agapakis and Tolaas seemingly know no bounds when it comes to finding weird spots on the human body to scrape some gunk off of.

But it's not gross, because that human skin comes from celebrities!

Nothing celebrities do is gross.

Celebrities are of a higher class than us, and therefore, we should be so lucky to eat food grown out of their bodies' discarded filth!

The celebrities having their bacteria made into cheese are musician Alex James...

The museums' Cheshire cheese was provided by the body of Blur bassist Alex James. You remember Blur, don't you? The drum solo at the beginning of Blur's hit song "Song 2" was used in every movie trailer from 1998 until 2017.

As an advocate for science in cooking, Heston Blumenthal, whose bacteria was used to make comté cheese, seems like a perfect fit.

Having an accomplished rapper like Professor Green is a fun choice for this exhibit, but here's the thing: according to Atlas Obscure, Professor Green hates cheese. He apparently picked mozzarella because it's the kind of cheese he hates the least.

Ruby's Twitter does say she's a "food writer," so maybe she just had a stilton cheese made out of her so the exhibit could get a write-up in whatever publications she's at these days.

Remember that song? "Our House?" It was by the band Madness, and the frontman, Suggs, has been immortalized as the cheddar of the group. And while "Our House" is a great song, I can't help but wonder — it was your house, but it was in the middle of the street? How does that happen?

The cheese are "a unique microbial portrait of the donor."

There's a lot of uniqueness in the gross stuff we secrete that can be made into cheese. Again, according to the Victoria and Albert Museum blog, " "each cheese will be a unique microbial portrait of the donor (while you are 99.9% identical to the person sitting next to you in terms of DNA, this is not true of your microbes, you might only share 10% similarity) – like a celebrity selfie in cheese form!"

Truly, the only way to ever get to know someone is to make cheese out of them.

So if you're getting married, make sure to grab a skin swab, cultivate a fine cheese, and see if you like it best smeared on a cracker or melted on a burger.

Do not marry anyone who can only make cheese good enough for a burger.

All cheese is good enough to go on a burger, girl. You deserve a man who pairs well with grapes and a nice red.

The museum's goal with this exhibit is to explore the importance of microbes in human digestion.

While we've all started wrapping our minds around kombucha and its positive, belly fat-snatching health ways. Maybe it's time we had a similar reckoning with microbes?

Since Cheese and body odors can often smell similar.

This project is meant to illustrate the subtleties that cause us to love and/ or be disgusted by certain aromas. "These odors, disgusting or delicious, have a great deal to do with context and psychology."

What remains unaddressed, though, is the psychological impact of eating another person's old skin flakes.

Look, I want to lose my belly fat as much as the next guy, but I also have to live my life! Do you know what that life entails? Not eating other people. I'm doing just fine without chowing down on a cheese I crafted with sweat from behind my buddy's knees, thankyouverymuch.

This project is also exploring our collective desire to only eat perfectly clean food when some bacteria may, in fact, be good for us.

When we first discovered microbes and linked them to a number of possible diseases. And since then, we've been scrubbing and boiling and irradiating food before we even think about eating it. This exhibit hopes to prove that food that is a little dangerous can still be delicious and not yak all over the waiter.

And since there is nothing we like more than interacting with celebrities...

... these stars were the perfect choice to make cheese out of. If this little girl was this excited just to meet former WWE wrestler Lita, imagine how excited she'd be to eat cheese made out of her body sweat. And if that sweat came during an official WWE Women's Championship match? Even better!