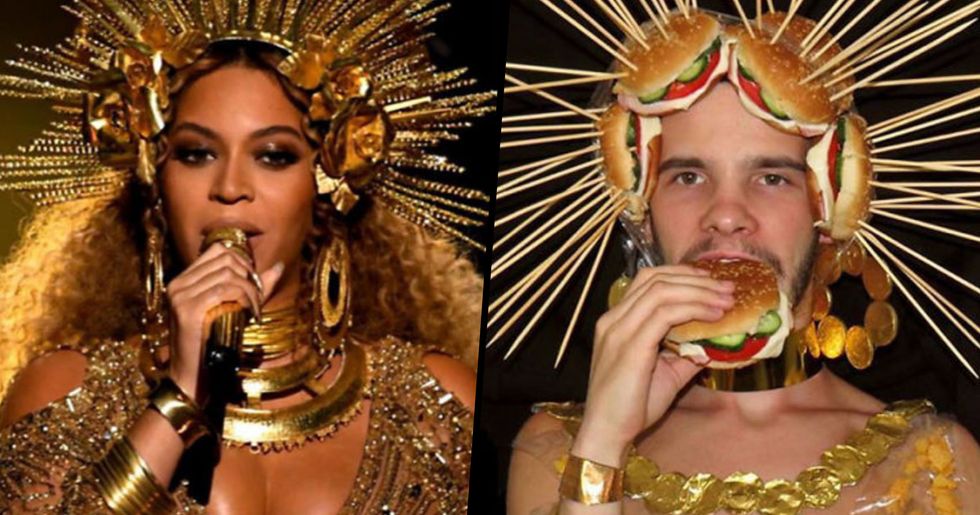 Ah, celebrities. They're just like us - except for the fact they have seemingly unlimited budgets for their clothes and accessories. Dressing like a star is an expensive business.

But one Instagram star decided to take matters into his own hands. Romanian artist Bogdan recreates iconic celebrity outfits on a supremely tight budget - and his creations are absolutely amazing. Using household items like sponges, toilet paper, and the contents of his fridge, you'll be blown away (and highly amused) by what this talented guy comes up with.

We personally wish he'd gone for the glittery cheekbones, too.

All four of these looks are incredible.

Great use of avocados - though we think he could have tried a bit harder with his bikini.

Who knew you could achieve such an extreme look using only candy and some sharpies?

We'd be very nervous about rolling around with all those eggs.

Not all of us have his skill with a makeup brush, so why not fake it til you make it?

We wish we'd seen this one in time for Halloween!

Using twigs instead of hair is some serious shade.

No exotic parrot? Any old fowl will work.

You've gotta hand it to Bogdan, he knows how to work a vegetable.

This looks great - though we can't imagine it smells too fantastic for the wearer.

This look was universally panned at the VMAs this year - but we actually kind of like Bogdan's affordable take.

What an innovative way to replicate those iconic denim boots.

Using toast to replicate his stripes of beard is an ingenious touch.

Who knew a bundle of straw could be so high fashion?

Noodles look pretty good - though we can't imagine they feel too pleasant.

This one really made us laugh.

We don't want to think about the clean up after this one.

He sure knows how to make the most of a simple piece of fruit.

Bonus points for innovative use of power cord.

Whoever thought dish sponges would be so glamorous?

This is a man who really sees the aesthetic potential of produce.

We can imagine Gaga is a near-endless source of strange outfit inspiration.

We suspect this might have been an excuse to eat a Big Mac.

Who knew a trash bag and two old wigs could be so glamorous?

Those fake tattoos are particularly hilarious.

A string of garlic instead of a blonde braid is surely a stroke of genius.

Everything about this is just perfect.

The very definition of "use what you've got."

Having this many slides is still kind of a flex.

An entire red carpet look created with napkins. His mind is so powerful.

Loofahs as a wig is actually something we could see a celebrity rocking.

The decorative windmills are a very clever touch.

That dog has really been worth his weight in gold for recreating celebrity outfits.

A dress made out of a windscreen shade? Your face could never.

Feather dusters and cheese graters? Bogdan is really spoiling us.

A slightly less detailed look - but a look, nonetheless.

Just keep that sour sugar out of your eyes!

The semi-deflated balloons make it.

The use of captioning is particularly hilarious.

Two kinds of candy for the hair, plus some amazingly misshapen "hoop earrings." Well done.

Emerging from the bathtub, expectations vs. reality.

Innovative use of leftover Easter candy.

Did Jessica Biel do it better?

Don't try this at home if you don't want to risk stabbing yourself in the eye, kids!

It's time-consuming work creating vegetable hybrids to use as hairpieces - but someone's gotta do it.

Is that ... is that a groin protector?

The vegetables are great - but we're really impressed with the ruched trash bag coat.

Loving his take on this "editorial" makeup.

Brought to you straight from the garden centre.

To be fair, the original photo kind of looks like one of Bogdan's creations already.

Who knew trash bags would be such a huge feature of these celebrity looks?

Innovative use of a vacuum cleaner pipe. Top marks.

The car air freshener as an earring is truly incredible.

Looking very pleased with himself here.

Toilet paper might be coming for trash bags as the DIY costume MVP.

Say what you like about Bogdan, but he's not afraid of gluing food to his body.

He's very talented at creating a cleavage out of nothing, we must admit.

Lettuce leaves and a fishnet stocking - this is a totally classic look.

His creation is actually kind of a look.

The coins alone are impressive, but when you notice the feather boa his attention to detail is clear.

We think he could have made a little more effort with the lipstick.

A golden globe or a can of drink - same difference.

Ignore the "hair" for a second - that necklace actually looks kinda good?

25. The Girl With A Pearl Earring

A work of art, created out of an old mop head.

An excellent dig at her #ad, too.

Another stellar appearance for the garlic bulbs.

If you can't afford a set of acrylics, consider pegs!

If he's not using candy to create this colorful hair, he can always rely on cleaning supplies.

The shelving unit absolutely makes it for us.

You've got to admit, this guy's imagination is impressive.

If you squint your eyes, this one kind of works.

You have to hand it to him, the materials he uses to create a cleavage are innovative.

Those feather dusters have really been a workhorse for these looks.

A wonderful take on the Dangerous Woman's iconic bunny ears.

Replacing roses with red peppers is just so clever.

Any look which features fried chicken is a-ok with us!

Not quite sure why he had to substitute watermelon for pizza here ...

You can't fault his dedication - and his bred budget must be huge!

Who hasn't imagined being on the balcony below?

Subbing a wedding dress for a quilt is a swap we can get on board with.

Cannot overstate how obsessed we are with this hair.

While he's clearly multitalented, it's in the fake jewelry making that Bogdan really excels.

He really went to town in the baked goods aisle to create this look.

Who knew two perfectly placed false nails could be so effective?

While the bows are a cute touch, it's the CD-bra that really makes it. Into fun celebrity Instagrams? Scroll on for the amazing Instagram account which photoshops stars alongside their younger selves. It's surprisingly hilarious - and super cute!