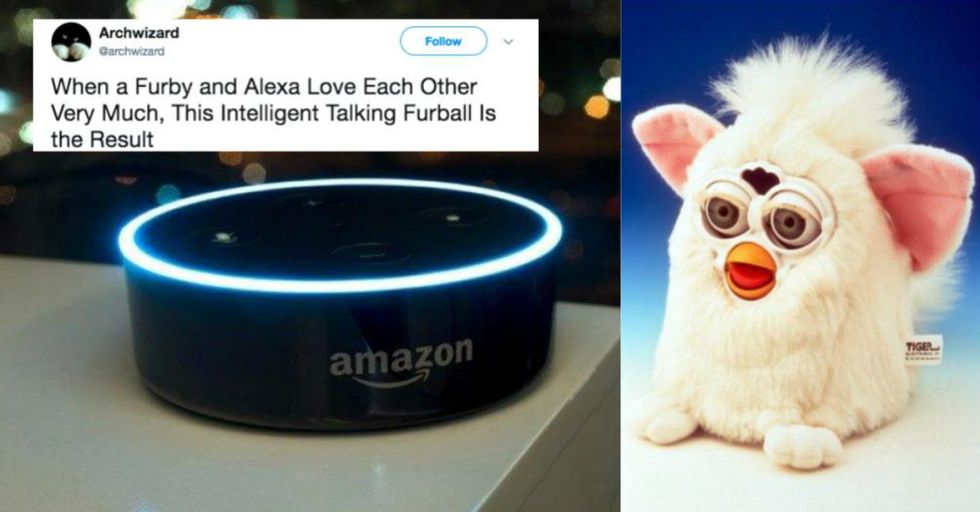 If you were alive in the 90s, you probably remember Furbies: those furry robots that were supposed to learn to speak English but actually just woke you up in the middle of the night speaking in “Furbish” and demanding you hang out with them and their weird lifeless eyes.

This week a web developer in Tampa, Florida figured out how to turn his Furby into an Amazon Echo, with truly unnerving results.

Furbies were a must-have toy in the 90s.

Anyone who was anyone in 4th grade had a Furby, a small furry robot resembling an owl or maybe a hamster? Some sort of rodent-bird lovechild that had also visited an over-enthusiastic hair stylist and/or colorist.

Furbies were kind of amazing technology for the 90s.

As scary as they were, Furbies were pretty cool. They arrived speaking only “Furbish" but over time, the little furry robots were programmed to gradually unveil new English words, giving the appearance that they had learned how to speak from their owners.

Web developer and designer Zach took a Furby and rewired it to act as Alexa, the voice of the Amazon Echo.

In a video on YouTube, Zach explains how he dismantled the Furby and reassembled it to connect to the Amazon Echo. So while the Furby still looks like a Furby, it performs all the tasks Alexa does.

On Zach’s channel howchoo he frequently posts videos about how to tinker with electronics to make them do new things.

And it’s terrifying! Furby was scary to begin with, if we’re being honest, but seeing it’s eyes and beak attached to a stripped down robot body is downright nightmare fuel.

Essentially he replaced Furby’s operating system with a Raspberry Pi, a tiny computer used to teach programming and robotics. You can learn about his process in more detail here.

Alexa can be run through a Raspberry Pi because Amazon open-sourced Alexa for this specific purpose.

Essentially, Amazon is all in on people building their own weird Alexas! Other developers have even put one into the a singing Billy Bass fish toy.

It took Zach a whole year to figure out how to do it.

And multiple Furbies! Zach admitted that he accidentally killed a few Furbies along the way. Please tell us there is no such thing as Furby ghosts because NO.

He was worried that it might catch on fire.

Zach worried that because he was putting in a new operating system which got much hotter than Furby’s original system and Furby is covered in fur, it might catch on fire. To be sure it wouldn't, he did some very scientific tests where he burned the skinned pelts of Furbys in his firepit. Anyone have marshmallows!?

He calls his creation Furlexa and it totally works!

Through a lot of trial and error Zach was able to create a working Furby-Alexa hybrid, retaining the original movements of Furby but now with the voice and technical abilities of Alexa. All your nightmares have come true: Furby, once restricted to indecipherable babbles now has a voice! And can take commands, or maybe eventually give commands and rule over human society? Just a conjecture.