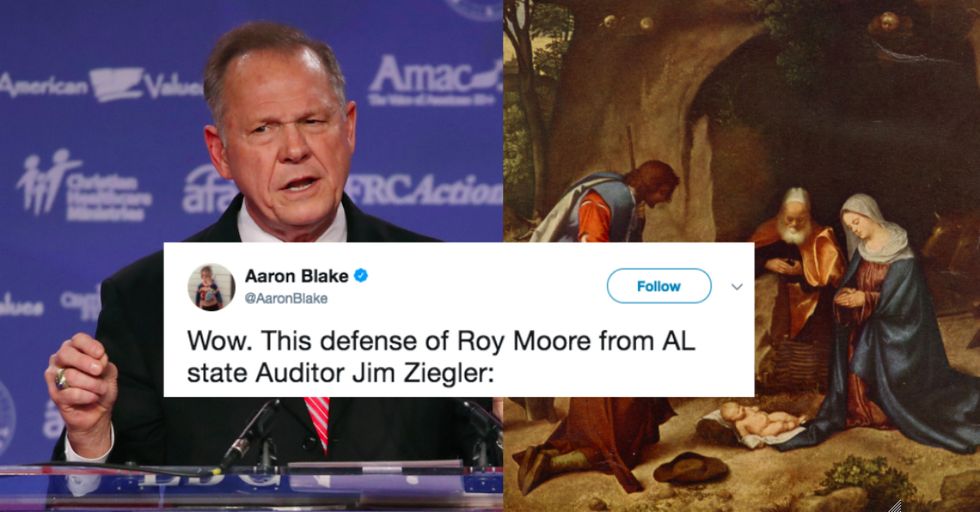 A bombshell report by The Washington Post detailed how Roy Moore, the current Republican nominee in Alabama for the U.S. Senate, engaged in a sexual relationship with a 14-year-old girl when he was 32 years old. Leigh Corfman told The Washington Post that Moore approached her and her mother outside a courtroom in Etowah, Alabama in 1979. He picked her up days later, drove them into the woods, and kissed her. On the next visit, he took off her shirt and pants and removed his own clothes. He touched her over her bra and underpants and guided her to touch him over his underwear.

Whereas the GOP and Fox News and every Republican crone seemed outraged when allegations came out against Harvey Weinstein, they've balked at taking such a hard line against one of their own, even, in one case, invoking the Bible in a terribly unsound argument.

"I wanted it over with — I wanted out," Corfman told The Washington Post. She remembers thinking, "Please just get this over with. Whatever this is, just get it over."

Three other women told The Washington Post that Moore pursued them when he was in his 30s and they were between the ages of 16 and 18. Moore, now 70, denied the allegations in a written statement, claiming the report is a "desperate political attack by the National Democrat Party and the Washington Post." As always, GOP senators are unwilling to vilify one of their own. Some have said he should withdraw from the race if the allegations are true — leaving room to consider the insane notions that A — The Washington Post didn't thoroughly check sources and corroborate stories and B — four women (and the 30 other people WaPo interviewed for the report) are lying.

Then, there was the Bible defense. Alabama State Auditor Jim Ziegler truly, truly missed all the points when he compared Roy Moore preying on a 14-year-old child to Mary and Joseph and Jesus.

"Take Joseph and Mary," Ziegler told The Washington Examiner. "Mary was a teenager and Joseph was an adult carpenter. They became parents of Jesus. There's just nothing immoral or illegal here. Maybe just a little bit unusual." In addition to being totally bonkers, we must point out that Ziegler's defense is also factually wrong. The legal age of consent in Alabama at the time of Moore's abuse and now is 16. What Moore did was absolutely illegal, not to mention soundly immoral. Corfman was a minor. Minors are legally unable to give consent.

Aside from the fact that Ziegler ignored morality and the law in his judgment of Roy Moore, he also got the Bible story wrong.

The entire thing is that Mary was a virgin. Immaculate conception! Joseph never inappropriately touched Mary in a car! This line of defense is beyond absurd.

The Bible is, well it's...*whispers* it's just stories. There's no way of knowing how old Joseph and Mary actually were. And if you subscribe to what the Bible says, you believe Mary was impregnated immaculately, without sex, by God, not Joseph the "adult carpenter." Sure, Christianity is practically built on people picking apart the Bible and interpreting its words to fit their own biases, but this is like, one of the big things that everyone seems to agree on. There's that other thing, too. What was it, David Martosko? Oh yeah: Jim Ziegler sucks.

In conclusion, the world is a rapidly deteriorating place thanks to people like Roy Moore and Jim Ziegler.

We've entered a bizarro reality in which pedophilia and sexual assault are no big deal as long as you're against gun control but it's the end of the world if Hillary Clinton might have taken money from you. GOP, you're sick and twisted and there's no recovering from this shame.