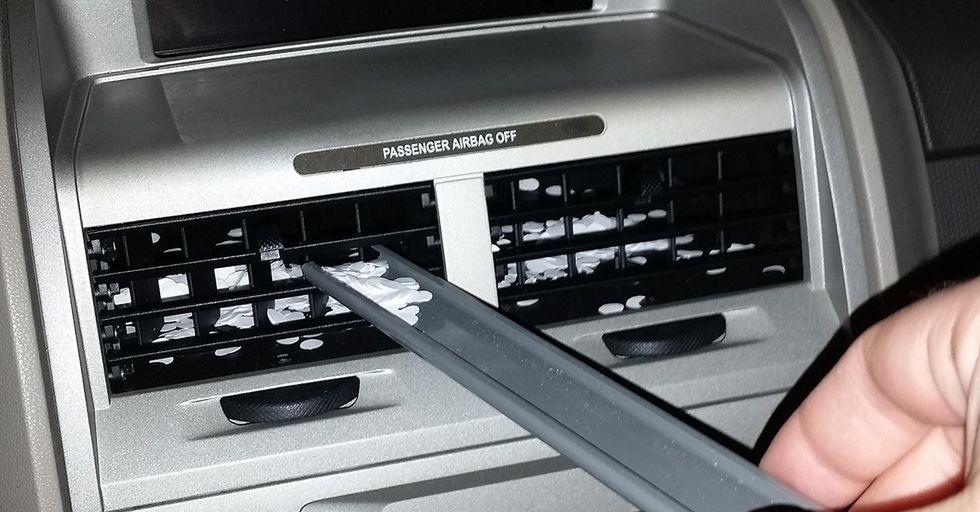 There are pranks, and then there's REVENGE. When a husband (Imgur username Mackey13245) was pranked by his wife on an April Fool's Day, he waited three long years to exact his revenge.

He starts his photo gallery with simply, "She started it..."

Then he proceeds to explain that a few years back, his wife had put Ben-Gay balm all over the toilet seat, causing him some, uh, burning discomfort after he sat down to use toilet. Then, diabolical as she is, she knew he'd jump to the shower for relief. Which is why she covered all the shower gel bottles with Saran Wrap so he'd have to struggle with his misery a little longer. So he narrates the set-up to his revenge...

He pays her back in kind, only this time using vapor rub.

"The story will begin like most mornings. A seemingly innocuous trip to the throne."

I'm not sure if the application...

...is actually worse than what she used, but this is only the beginning!

He assaults the next step in her morning routine...

...coffee. Most people know that coffee is sacred, and messing with it, well, it's a dangerous move.

Being the attentive husband that he is...

...he knows how he takes her java. So naturally, he sees an opportunity. And he takes it to a new level.

Yup. He went there.

Again, this is probably something that won't register immediately, but you'll drink enough to know that, hey, that wasn't sugar in there.

You're probably wondering what the confetti is for. Well, that's a great question. When it's over, he'll probably celebrate. She will start HER revenge.

"After all that, she should just head to work…after all, I can't get her at work…well, turns out I emptied the hole punch at my office today and brought the contents home." Homemade confetti!

You can probably see where this is going.

I'm guessing that even if this was HIS car, he'd still be willing to make the sacrifice of having to pick up thousands of little paper dots for the next decade or so.

With his wife none the wiser. You can tell she's in for a very frustrating day.

He turned off the other vents for and jacked up the AC for maximum blasting power.

Let's hope she's got a sense of humor. Otherwise, this could turn into a real feud. Sadly, that's where his post ends. With us on the edge of our seats, imagining what transpired. BUT WAIT!

...his wife sent back only this one simple picture with no caption. Something tells me we might have to wait three more years before she strikes back next.