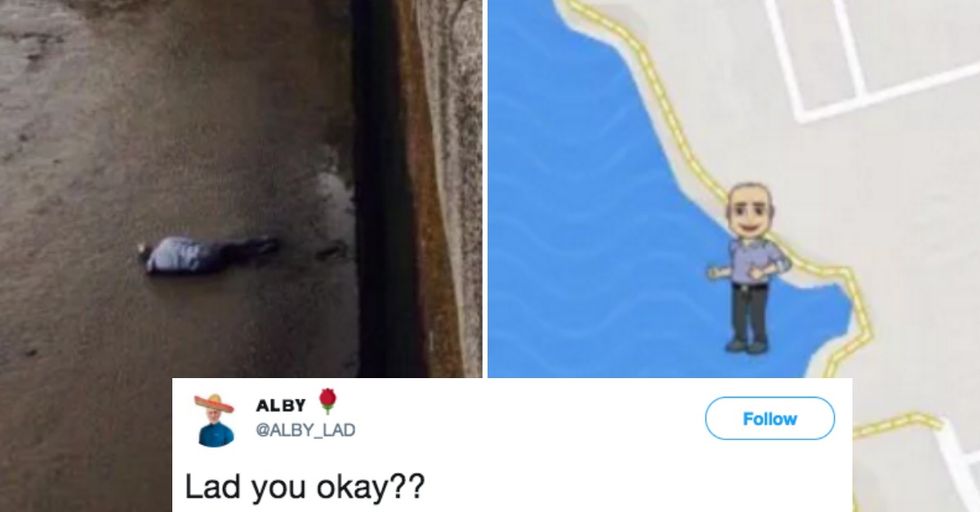 This Guy Wins For Most Awkward Time on Snapchat Maps

Because I'm approximately 853 years old, I have to say that I'm not really familiar with Snapchat. In fact, I only got a smart phone last year and the sales guy asked to keep my flip phone to send to a local museum

This is due in no small part to Snapchat maps.

The feature lets users show friends their location, and also allows them to see snaps from people nearby. It basically gives you a new way to stalk someone, which makes me glad that I don't use Snapchat. But here's how you can turn it off, if you're so inclined.

Like this guy, who got busted by his girlfriend. Not cool, dude. Not cool.

Someone else who probably wishes he had turned it off is a man from the UK who is known only as "Dave," in quotes because that's not really his name. Dave and his friend "John" are into photography, and they're willing to do just about anything for a cool shot.

Dave laid down in the mud to get a picture of the ferry, but then got stuck in it.

Being the helpful friend that he is, John snapped this pic of his friend as they waited for help.

And after he was done with that, he flipped open to Snapchat and saw Dave's emoji "standing there thumbs up and smiling."

I've since learned that you can pick your own emoji and dress them however you want. They are called bitmojis. You can get their app on its own away from Snapchat and make your character just for fun, apparently. Dave was one of those people, and looking pretty snazzy.

And just look at this juxtaposition.

John, continuing his streak as a sympathetic friend, sent the pictures to his friend Alby to post on Twitter.

"I thought it was funny, to be honest — how accurate it was, and the situation he got in," Alby said.

Clearly he's not alone in that opinion, as they've been retweeted almost 90,000 times, and people are cracking up.

"It's the expression with the thumbs up that got me," added another.

They weren't without concern...

And another confessed they're "going to Hell for laughing, but I can't help it."

To reassure everyone that Dave was in fact okay, he posted an update.

Keep those thumbs up, Dave. You're an inspiration to us all.