It will probably be the last time he sleeps with socks on though. | 22 Words 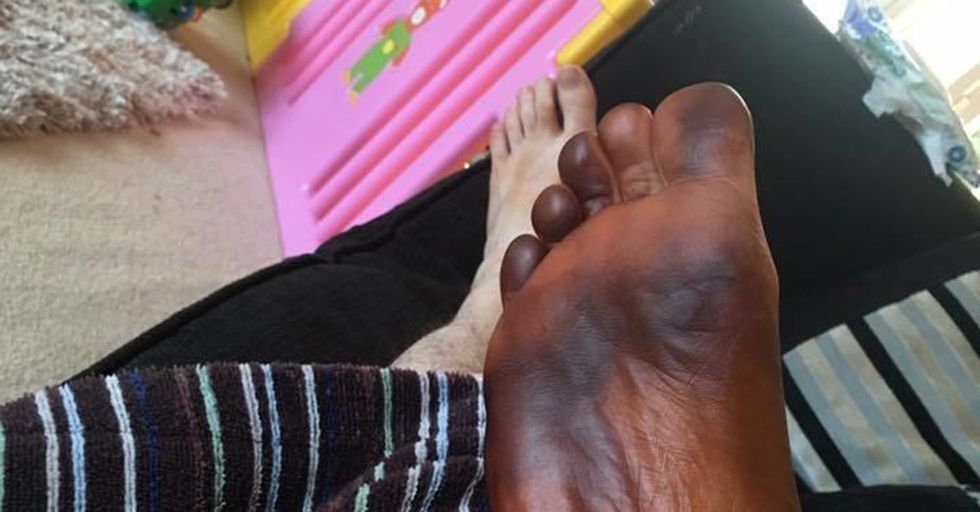 This Guy Woke Up With a Brown Foot, and It's Important That All Men Know Why

When Michael Onorati, a 35-year-old man, went to sleep with his socks on after a long day, he had no idea what he was in for.

Now I know what you're thinking, "How can someone sleep with their socks on!?"

It will probably be the last time he sleeps with socks on though.

Because upon waking up, he realized that his entire foot had turned brown...and he had no idea why.

He turned to the Internet for answers, but couldn't find any reason that would apply to him.

As you can see, it was a scary sight.

We can see why Michael was a little bit worried, to say the least.

Thinking that it looked like frostbite, he was worried that the tissue in his foot had died, though he was still able to control it somewhat.

He was planning to head to the hospital, but his girlfriend got home before he could leave, and she knew what was wrong immediately...

When his girlfriend, model Stephanie Wylie, got home, he asked her if she had any idea what happened.

When he told her the problem, she knew what the issue was immediately. And couldn't stop laughing.

She had used his socks as tanning mitts, and the build-up of fake tanning substance was the cause of his brown/black feet.

She had spaced out and turned them inside out, putting them back in his sock drawer.

Oh man, even we feel relieved, we can only imagine how much relief Michael must have felt.

And a little bit of shame.

Stephanie said on Facebook, "I’ve got millions of tanning mitts but when I couldn’t find one, I grabbed a sock and put a rubber glove on and it worked perfectly fine. This is the front of his foot his nails."

Gross, but at least it's not dangerous!

When he learned the innocent truth, he was relieved. Then he couldn't stop laughing either.

It's probably much easier to laugh knowing your foot isn't about to fall off!

In turn for her sharing the hilarious incident on social media, others posted their (remarkably) similar stories.

Even knowing that there is nothing wrong with any of these feet doesn't make it not gross...

This type of accident is surprisingly common...

...but that doesn't make it any less funny, does it?

But if you're looking for a moral to this story (and you might not be!), use the proper tanning mitts for fake tanning.

And if those aren't around, at least tell people when you use their stuff in a pinch!