Reddit Just Combined the Power of Bob Ross and Birds, and It's Too Cute | 22 Words 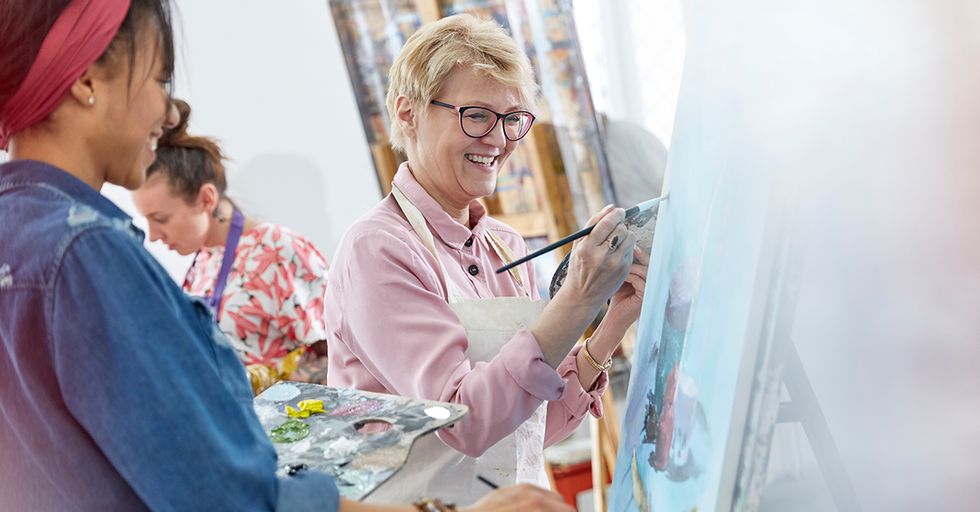 Reddit Just Combined the Power of Bob Ross and Birds, and It's Too Cute

Guys, the internet went wholesome again, and it was amazing. From one of the most unlikely places (Reddit) comes the most wholesome story of internet strangers this year. Reddit is known for their memes, their weird dark corners, and their anti-Trump pro-Trump game of tug of war.

But sometimes something so wholesome cuts through all that weirdness, and that's exactly what happened this week when Redditor, Gaddafo uploaded a painting of a bird she thought no one would like. Now you might be thinking, "I see crap like that on Reddit all the time. Someone paints something amazing and says 'no one will like this' and they rein in the compliments," and you'd be right. But this time, something special happened.

People decided maybe it would be fun to join in, and soon there were like way too many pictures of birds on Reddit. And now we get to share those birds with you! It's bird-ception all the way down.

It all started with a mom and her bird.

Nothing too special, but it was only her second painting, so that's saying something! I couldn't paint something like this on like my 100th try.

But soon after, another Redditor decided to paint the picture that was already posted.

And boy-howdy did things just start snowballing from there.

Check out a timelapse of this painting in action.

Things like this just remind me that I have no talent. But not in like a cute "oh, I'm so clumsy all the time" way. More in an "oh, you're very bad please stay away from sharp objects" kind of way.

I love that everyone is bringing in their own unique art-style to these paintings. It's crazy how talented in different ways all these people are.

This dude even painted one on his iPad!

Maybe iPad painting is more my speed. Now if only I had an iPad. (Tim Cook, if you're reading this, please send me an iPad. Oh, Tim Cook is most certainly not reading this? All of my hopes and dreams are just a fantasy? Got it.)

Okay, but the problem now is, how many people are painting the same picture at the same time. We're going to have like a family tree of hastily painted pictures of Redditors, right?

Right you are, past me.

Here we are back to the near-beginning. I think this "family" is my favorite. It's just so wholesome.

Because then a wild watercolor painting appeared!

That's just a little inside Reddit joke for you. And for people who don't know who u/shitty_watercolour because you're not a loser who spends all their time on the internet like me, ShittyWaterColour is a Redditor that used to paint watercolor pictures of people's stories, but he "retired" a couple years ago. But he's back! At least for this one painting.

This one is just downright impressive...

These people are working fast, and I'm shocked at how much detail they can put into their art in such little time.

I think this one is my favorite. It's gorgeous and kinda scary, and it keeps the art-style from the previous artists. I love!

And we've reached the end.

Or have we? Well, we've reached the end of this family tree, but let's see how far down we can do until we reach the end. So far this painting has six other pictures in it. Can we reach ten? Hint: I haven't counted yet and I have no idea. How exciting!

Okay, all the way back up!

We're starting over at three. Yikes.

I love that the guy in this photo is on a second canvas.

She must have painted her whole picture and then seen this other guy's and thought, "well that won't do. Time to paint an entirely new picture."

There's also some artistry to the pose.

This man is doing nervous sorority sister mixed with holding in a fart. Impressive.

This guy's art goes so far as to imitate the face from the other painting.

Or at least I think that's what he's doing. Who knows, I'm certainly no art critic.

Wait... where have we seen this iPad before?

This guy double dipped! Not sure if that's cheating or if it's just insane commitment to this bit. Probably a little of both.

This one is cool. I love that these really weird unique paintings are challenging artists to do things they normally would struggle with. Like this plaid!

Well, this is the end.

Plus, here's a bonus cat! That cat is a better artist than me, and I'm ashamed.

This is a masterpiece. The painting that started it all. This honestly deserves to be hung in MoMA. We did it, Reddit.

This isn't even the completed version! If you're curious, someone made a super cool interactive tree that you can see here.

Here's what some redditors had to say.

Agreed. But I think it's over! We've seen all the good pictures!

Someone wants Banksy to get in on the fun.

Not gonna lie, that would be awesome. But also seems very un-Banksy of Banksy.

Someone must have sent him a message to join in, and this is what he had to say.

The man from the second photo hears from the mom in the first one!

Seems like he's shipping his art to her. So now she can have her bird and a painting of her holding her bird!

He's trying to organize everyone to ship out their paintings.

This would be a very cool IRL gallery. But it would be even cooler if the original artist got to have this special collection in her home.

Some painters are doing their fellow artists favors.

Good point. It would be messed up to take the photo in front of some Bob Ross style landscape. Double duty!

I wonder how often this happened.

I'm not gonna lie, I had to throw mine away too and it was looking really good, I promise.

And finally, the thread that got Shitty Watercolour out of retirement.

A piece of internet history right here ladies and gentlemen.

This photo is unrelated.

But I found it while I was putting this album together and I needed to show you. It's from Redditor, GeorgieWashington, and I'm obsessed.

But what did you think?

Were these pictures as adorable as I think they were, or are they overrated bad art losers? Okay maybe that was a little harsh, but those were your words, not mine! Let us know, and maybe try your hand at painting your own!