This Guy Made A Theory Based Around Gummy Bears | 22 Words 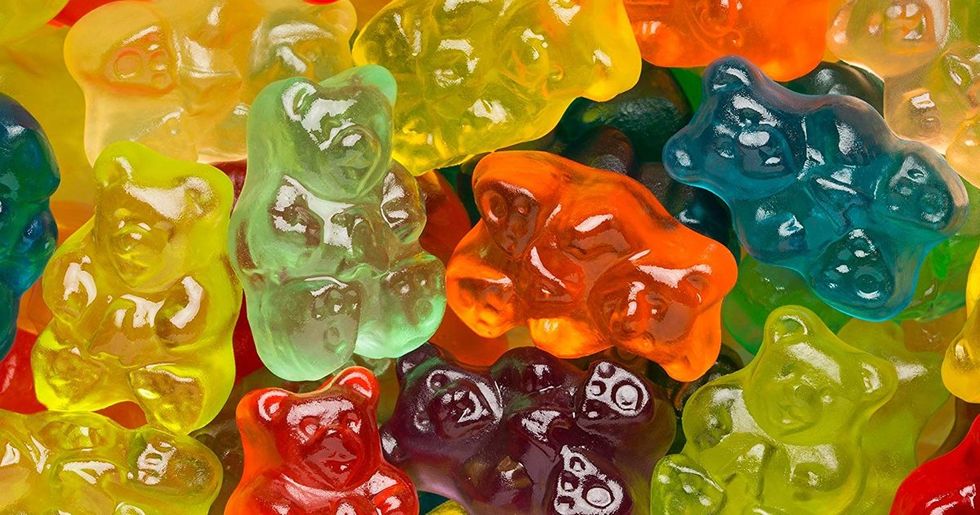 This Guy Made A Theory Based Around Gummy Bears

There are all kinds of wonderful people on Twitter.

I mean, there are also a bunch of horrible goobers on Twitter, but I prefer to focus on the good things the Internet has to offer us, ya know?

As you scroll through your Twitter feed, you never know exactly what you're going to come across. You may see a hilariously relatable joke about parenthood. You might read a funny thread about a guy's house being broken into by his neighbor's pets. Maybe you'll learn a new mind-blowing fact you can use to impress your friends.

Or, you might come across some gummy bear science. Yes, really. Thanks to Scott Barolo, a science professor at the University of Michigan, Twitter now has its very own viral thread featuring the science of gummy bears. We're truly living in the future, guys.

It all started when Barolo revealed he had a bag that purportedly contained 12 different flavors of gummy bears.

I think we can all agree that 12 is a lot of flavors.

Naturally, Barolo appeared to be rather skeptical of the bag's claims. 12 flavors? Really?

Like any good scientist, Barolo took some time to make observations about the package.

Made in the USA, it says! Interesting!

Unfortunately, Barolo struggled a bit in opening the package.

But all good experiments have their own share of setbacks. The super-sealed bag would not deter Barolo from the task at hand. He had science to do.

He started by dumping all the gummy bears out into one pile.

(Now might be a good time to point out that "gummy" bears are the general term for such candies, while "gummi" bears is actually a brand name. Just to clear up any confusion you may have!)

Barolo began by sorting the bears by color. But what's this?

Only 11 different colors? How can that be? Has the packaged lied to us?

There's only one correct response.

If the Albanese Confectionary Group doesn't right this wrong, I say we all boycott. Or, you know, maybe just move on with our lives. Life's too short to get too bent out of shape about gummy bears.

Luckily, there was an explanation:

Several sharp-eyed viewers have checked the photo on the packet and pointed out that I have been ROBBED of a purple… https://t.co/s17zLEV1ul
— Scott Barolo (@Scott Barolo)1553914106.0

Unfortunately, Barolo would be unable to taste the grape gummy bear. On the plus side, grape is probably the worst candy flavor, so maybe he dodged a bullet.

Here are the flavors the package claimed to contain.

Grapefruit? Mango? Watermelon? I have definitely been missing out on some interesting gummy bear flavors in my life.

Ever the scientist, Barolo formed an initial hypothesis:

Based on the bears' colors, he labeled them with the flavor he expected them to have. What do you think? Would you have made the same guesses?

Barolo then decided to smell each color of gummy bear.

That's dedication, folks. Like I said, he's a true scientist.

Unfortunately, there wasn't a lot of variation in the scent.

Starting at the one o’clock posiition and moving clockwise. The bears I have marked “lemon” smell like... a freakin gummi bear 😠
— Scott Barolo (@Scott Barolo)1553916010.0

But that kind of makes sense, right? After all, the bears have been in the package together for who knows how long...

Overall, judging by scent proved to be more or less impossible.

Yeah, they all basically smell the same, except the ones I marked “Lime” may be Green Apple. And it’s possible that… https://t.co/osYLmLSNNA
— Scott Barolo (@Scott Barolo)1553916287.0

They all smelled pretty much the same. Honestly, I'm just impressed he had managed to hold off on eating them this long.

Barolo also observed how each gummy bear sounded and felt.

TOUCH: they are all gooey and gross. SOUND: they all make a sticky sound when I pull them off the paper. No help there
— Scott Barolo (@Scott Barolo)1553916367.0

As you probably expected, these observations were also pretty unhelpful. Still entertaining, though.

Finally, it was time for the most important part of the experiment.

If I were a scientist, I think I would exclusively design experiments wherein I got to taste things. This would be right up my alley.

Barolo started with the bears he assumed were blue-raspberry-flavored.

I’ll start with the ones I guessed are Blue Raspberry. I’m not so sure about Raspberry, but I am definitely getting… https://t.co/N0NYNKCxGI
— Scott Barolo (@Scott Barolo)1553916889.0

And guess what? They were blue-raspberry-flavored! That's science in action, people.

He then moved on to the cherry gummy bears.

And they were cherry! Although his description of the flavor has me less than enthused about this particular bear.

You can see from his notes that he nearly made the fatal error of identifying the cherry bears as strawberry during his initial sorting. Whew. That was a close one.

So far, so good. But could the streak continue?

And now we venture into the oranges and yellows. This is where all hell breaks loose https://t.co/WabnfLSn1Y
— Scott Barolo (@Scott Barolo)1553917624.0

Of course the blue was blue raspberry. And distinguishing between cherry and strawberry was practically child's play. The yellows and oranges are where things really got tricky.

Good thing he switched his guess from "mango"!

Although Barolo couldn't help but notice that the orange flavor wasn't really very orangey at all.

Really I would call this “Clementine” but I’m at the mercy of the unimaginative flavor namers of the Albanese Confe… https://t.co/iIV8KGn3DS
— Scott Barolo (@Scott Barolo)1553918074.0

I didn't know until right this very moment that I want to try a clementine-flavored gummy bear. But I do. I really do.

Once again, Barolo was correct with pink grapefruit!

“Pink Grapefruit” tastes like either pink grapefruit, or the inside of a mailbox. The winning streak continues https://t.co/QPRADx10DI
— Scott Barolo (@Scott Barolo)1553918805.0

Although, honestly, what other flavor could that color possibly represent? Pink grapefruit was, in my opinion, kind of a gimme.

Lemon, pineapple, mango. Despite the actual fruits themselves being quite different from one another, the gummy bears were very similar. Yellow. Let's see if Barolo was able to distinguish between the three of them correctly.

The experiment took a sour turn when the bear Barolo had identified as pineapple turned out to be lemon.

Barolo was, understandably, a bit miffed.

But that's science. You can't make the data say what you want it to say. It's a tough lesson to learn, to be sure, but I'm sure the blow was softened by the fact that Barolo was literally eating candy for this experiment.

Luckily, Barolo didn't do a three-way mix-up of the yellow bears.

While he switched lemon and pineapple, he had correctly identified the mango bears. Something to be proud of, certainly.

Unfortunately, his failure in the yellow bear category seemed to affect the rest of the experiment.

I’ll be honest, I was so distracted by my humiliation at the hands of the yellow bears that I forgot to pay attenti… https://t.co/cfF09GxYVA
— Scott Barolo (@Scott Barolo)1553920393.0

Although Barolo was able to correctly identify the lime bear, I'm afraid things only got worse from here.

It was green apple. You can see the moment the experiment began taking its toll on Barolo.

64 percent isn't anything to scoff at! Plus, I would have definitely come to the same conclusion regarding the watermelon and green apple flavors based solely on color!

Barolo also ranked the flavors from best to worst:

Obviously, this is a bit more subjective, but we must allow Barolo this indulgence after all of his hard work.

He even created gummy bear horoscopes!

All in all, the experiment was a very fun read, and I, for one, am so glad that it exists on Twitter. Share this with someone who loves candy! Or science! Or both!