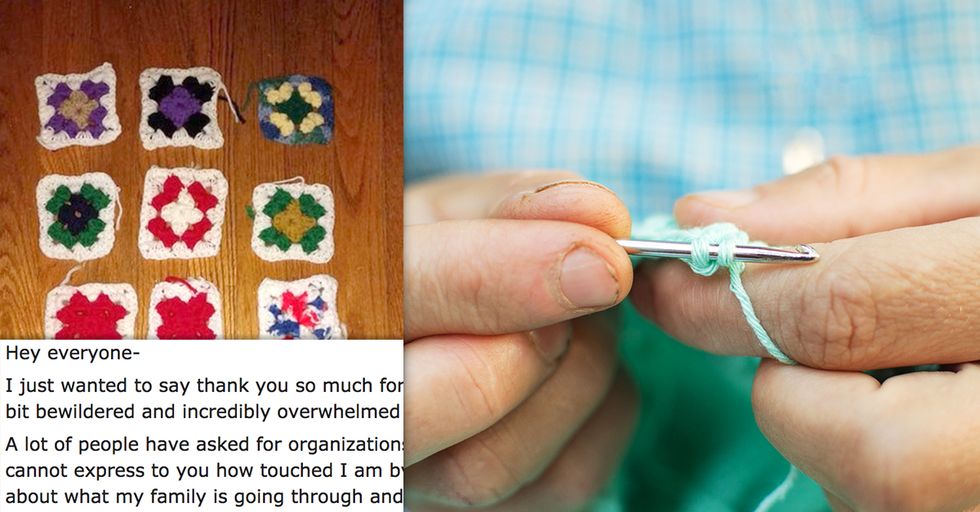 Alzheimer's is an awful disease.

It's a chronic neurodegenerative disease that causes one's mind to fail — slowly at first, and then more rapidly. Advanced Alzheimer's patients become completely dependent on their caregivers who, most of the time, they don't even recognize. Few things are more painful than watching someone you love go through the pain of losing the ability to communicate.

As awful as it is, the extent to which Alzheimer's affects the brain is also very difficult for many people to grasp. That's why photos such as the one in today's story are so incredibly powerful.

Redditor wuillermania's mother loves to crochet. She always has.

Unfortunately, she was diagnosed with Alzheimer's disease 12 years ago at the age of 54. Wuillermania says she's often described watching her mom succumb to the disease as her mind "unraveling." "When I came across the crocheting she did in the early stages of Alz[heimer's], it made me realize how fitting that actually was. Wuillermania posted a picture of the crochet work her mom did over the course of two years after her Alzheimer's diagnosis, and it's truly heartbreaking.

There's solid definition between each color, straight lines, and tight stitches. These squares were crochet very soon after the diagnosis.

Moving to the second row of crochet work, you begin to see things unravel a bit.

The stitches are significantly looser. The patterns are still easily recognizable, however.

The third row of crochet squares is drastically different.

The stitches are lumpy and uneven. In the square on the far right, the pattern is completely random and indistinguishable.

In the fifth row, there's a huge change in Wuillermania's mom's handiwork.

The first piece of crochet is a loose square with a black circle in the middle. But after that, the crochet work is no longer square. It's loose circles with very uneven stitches. The final row of crochet work is the most heartbreaking...

At the bottom of Wuillermania's picture are two knotted lengths of yarn. They don't resemble actual crochet at all.

"I don't remember exactly when she stopped being able to crochet for good," Wuillermania wrote on Reddit. "She made squares for a while, then circles, then the little pieces of crochet, until she got to the point where she just carried around the needles and yarn in her purse (which was otherwise empty since she couldn't really hold on to valuables anymore.)"

"At this point," Wuillermania wrote about her mother, "she is completely non-verbal and unable to care for herself in any way (eating, bathing, dressing, walking unsupervised, etc.), but physically she is still relatively healthy." "To the amazement of many, including her doctors, she has now lived 12 years since her initial diagnosis (they credit the level of at-home care she's been receiving by my family — especially her caretaker and my dad, who is truly a saint)."

Another Redditor replied to Wuillermania's compelling image with a painting done by their own mother:

"I've been through almost the very same thing with my mother too," they wrote. Their family decided to have one of her last great painting professionally frame. "The painting is of our family cottage, which was her very favourite place to be. It's not blue in real life, but it was how she saw the sun and the colour that day. She was always obsessed with colour, even as her health and lucidity declined... Her hospital room is papered with not only photos of family, but also of photos of brightly coloured flowers."

Here's another group of pictures that shows the progression of Alzheimer's from another painter's perspective:

The paintings were created by artist William Utermohlen. He was diagnosed with Alzheimer's in 1995 and began creating many self-portraits as the disease worsened. By the year 2000, he no longer recognized his own face.

Alzheimer's is a horrifying disease, but those who suffer from it aren't completely without joy in their lives.

This touching video shows a mother with Alzheimer's sharing an incredibly sweet moment with her beloved daughter. If you'd like to donate to Alzheimer's research, you can do so at alz.org.