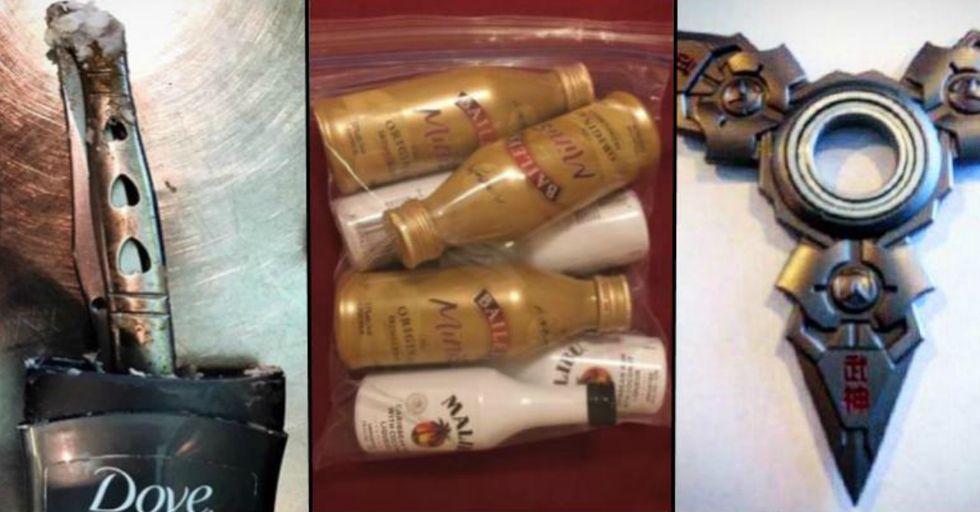 These Are the Craziest, Weirdest Things People Have Tried to Sneak Onto Planes

What's the first thing that comes to your mind when you think of the TSA? Is it the super long security lines? Perhaps it's the unnecessary hoops they make you jump through or maybe the fact that it's kind of all BS anyway.

How about comedic genius? Probably not. But, it turns out, you have to have a sense of humor when you're dealing with the absolutely inappropriate and downright crazy things people try to bring onto airplanes. Luckily, whoever's in charge of the TSA Instagram account is a laugh riot.

Here are some of the TSA's most hilarious posts. Warning: They are likely to make you scream, "What were they thinking??!" at the screen.

Strap in, because the person behind the TSA Instagram account is the King of Wordplay, and it's going to be a punny flight. With treasures like this knife hidden in deodorant, it's tough not to have such a sharp wit.

Think the TSA isn't up on the things all the kids are talking about or that they're unable to nimbly work these trends into funny jokes? Think again.

The Answers You Need

Thought you could bring tiny alcohol bottles on a plane with you so you can feel like a really cool giant, eh? Nice try, buddy.

This post is troubling not because they allow donuts on a plane—that's great—but we can't believe you're allowed to put them in your checked luggage. That's a one-way trip to hella smushy donuts. No, thank you!

Your face when the TSA accuses you of lying... Newsflash: Santa doesn't give out coal in May (when this was posted)! He's strictly a December 25th gifter.

Straight To the Point

Punny and full of good advice! The TSA Instagram is my new best friend.

If there's one quality I want in my Transportation Security Administration, it's for them to be well-versed in the world of Dragon Ball Z.

I'm in love with the TSA's approach to captions: "Haha! Funny joke. But seriously, don't bring this on a plane."

Even when confronted with trolling jokesters, the TSA's responses are cool as a cucumber. I don't know about you, but I think that 'nanner knife looks disgusting. All I can think of is the gnawing and licking it took to get it to look like that.

Whoever's behind this account is so full of dad jokes I'm going to start messaging them to ask for help with my taxes.

The TSA is up on Record Store Day and full of advice on how to store vinyl? Yeah, I'm officially convinced that the person behind this is my dad.

That face when you're surprised and impressed that the TSA is making "that face when" jokes while referencing "Tattooine farm boys" and Star Wars day. Be still, my heart.

WOW! The TSA will confiscate your throwing stars while throwing some serious shade your way. That loneliness insult cuts deeper than any illegal weapon ever could.

Posting this mostly so someone in my life will recognize that unicorn stained glass windows exist and buy me one.

If you look through the account, you'll realize just how committed the TSA is to informing you that #PieCanFly. They're really doing the Lord's work out there.

Whether it's deep dish pizza or a stock photo of key lime, you can always bring pie onto the plane. This is just further evidence that the TSA is extremely devoted to spreading the knowledge that pie is A-OK to fly. Maybe a little too devoted. Makes you wonder: What sort of pie questions are they getting? Who in the TSA has a pie fetish? What's with the #PieCanFly movement, anyway?!

In case there isn't already enough to love about this account, I'm pleased to announce that there's no shortage of TSA dogs on the page, either. Puns, dad jokes, and dogs. It's like they made this just for me.

"Oh, and that thing next to it is a knife." *brushes the dirt off the TSA patch on his uniform"

I want to learn more about the man who grilled hot dogs specifically for his plane ride home. Who is he? What are his hopes and dreams? How does he plan to store his airport hot dogs?

Axe Me a Question

Where in the world do you find a toilet brush shaped like a gun from the Old West? Ah yes, Texas. Of course.

Seed or No Seed

TSA's getting crazy! Bring the mango! Bring the seed! It'll be a mango/seed party where we dance the Conga line up and down the aisle of the plane!

See? You think you know where they're going with the joke, and then they switch it up on you! Oh, TSA Instagram, you are constantly surprising us with your charm and wit.

Sorry, fancy knife owner. Just because it has a braided handle doesn't mean it's going to make it through security.

The TSA Instagram's motto is one to live by: When someone asks you about lemons, make a lemonade pun.

Posting this one for the joke but also for the picture of burgers because mmmmm, burgers.

Caught, Because They Could

This is pretty perfect. But I'm sure this person wasn't too devastated since they got this pocket knife years ago as a free promotion for the Leonardo DiCaprio movie.

Phew! I'm so glad to learn that pancakes are allowed on planes because I always have pancakes in my pockets, and sometimes I forget to take them out before I go through security.