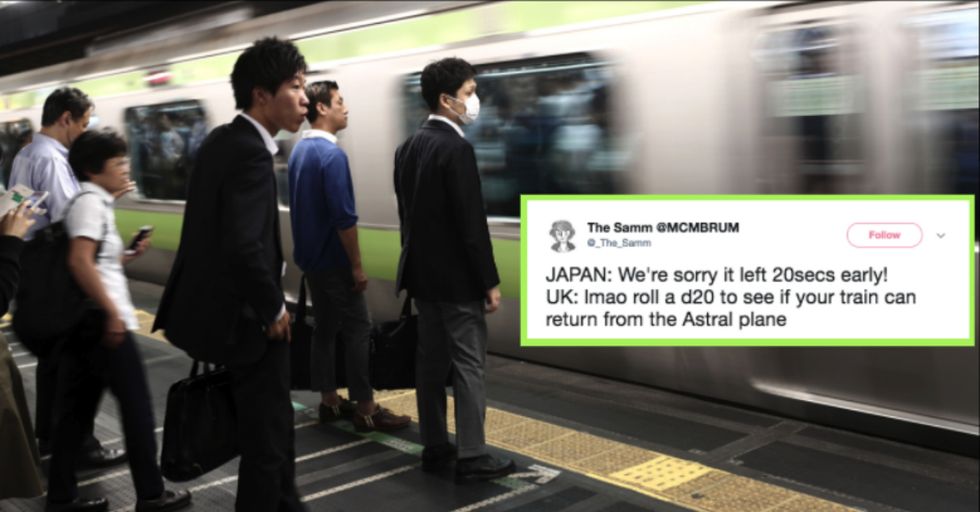 Japan clearly has a lot of things figured out. Hospital food, for instance. And gun control!

Now, it seems as though they've completely solved the problem of public transit, as well. The country is famous for its ultra-punctual train systems, but earlier this week, that system fell apart... kind of.

When you read the response the railway management had, you'll immediately want to pack a bag and book a train ticket. Yes, really.

Fact: Taking the train super sucks most of the time.

Between the extremely close quarters, the inexplicable weirdos, and the unreliable arrival and departure times, public transit can be a literal nightmare. But not in Japan!

In Japan, public transit is handled completely differently from the way the rest of us are used to.

Most notably, it's always on time. Always. It's a point of pride in Japan how punctual their trains are.

But earlier this week, something happened. The train was not on time.

While this gaffe would probably go completely unnoticed by most people, the railway's management issued an official apology for departing a full 20 seconds early.

People who don't live in Japan had this reaction:

There are two things surprising about this whole thing. First, the train left early. It's a truth universally acknowledged that if a train doesn't leave on time, it's because it left late. Secondly, they made an apology for the early departure. They apologized! For being early! People quickly started comparing Japan's transit to their local trains.

As you'd probably expect, the comparisons were not favorable to other countries.

Japan apologizes when their trains leave early. In other countries, you're lucky if your train leaves within 20 minutes of its scheduled departure.

Japan is truly at the cutting edge when it comes to efficient transit.

In terms of infrastructure, the story about Japan's train network apologising for a train that left 20 seconds earl… https://t.co/gNm1HOtuSo
— Keith Williams (@Keith Williams)1510875647.0

Hearing about Japan's system really gives other countries something to strive for. After all, they brought us Pokémon. Obviously, we should be taking more cues from the Japanese people.

How is this problem not solved yet?

We've invented tiny computers that fit in our pockets, for goodness' sake! Surely we can move past late trains, right?

So next time your train is late, and you're surrounded by smelly armpits, just think about Japan.

At least you can take solace in the fact that somewhere, even if it's very far away from where you are, the trains are good. And if that's not enough...

Sure, it'll involve air travel, which is always super annoying. But that will be the end of annoying transportation for the rest of your life! Worth it.