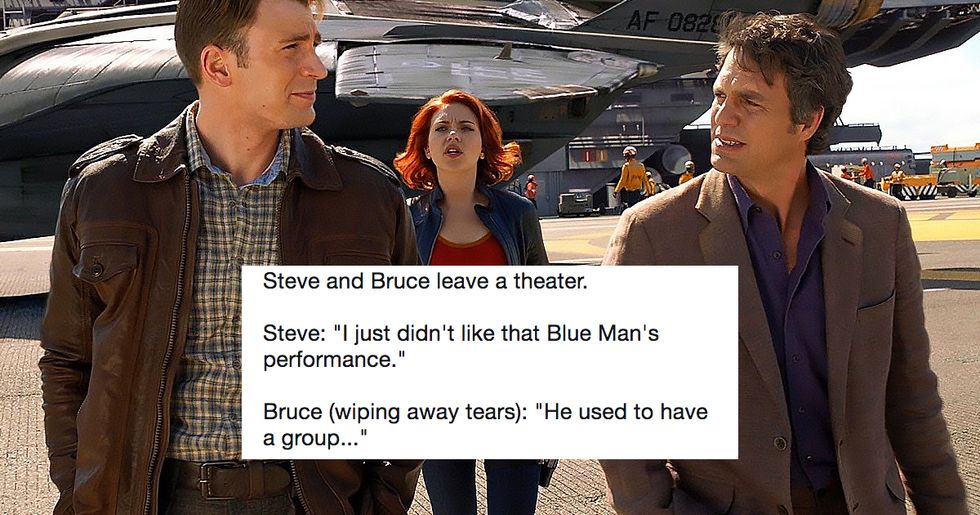 After almost a year, we're finally closing in on the release of Avengers: Endgame. Needless to say, the internet is hype. And while we're mainly just crying over all those black-and-white character posters Marvel keeps releasing, there's also time for some jokes.

Spoiler alert: at the end of Infinity War, Thanos snaps his fingers and kills half of all life on Earth. So one Twitter user started cracking jokes about the world after Thanos's infamous snap. Because yeah, that sounds super sad, but think about it. There's a lot of potential for comedy when you think about it!

Soon, hundreds of other Marvel fans were chiming in with their own post-Thanos jokes. The resulting thread of tweets is absolutely hilarious! So get ready for the upcoming Endgame by checking out this Avengers-themed comedic genius!

Who will live? Who will die? And who the heck will come back from the dead?! (Because come on, you know those Infinity War superheroes aren't all staying dead.)

We may not have those answers, but there are some other theories circling.

People are taking it upon themselves to answer the question: who else notable died during Thanos's snap? And what is the world doing without them?

Here's the thing: half of all life is dead in the MCU right now. So statistically, if we're thinking about popular music duos...yep. Half of them are gone, too.

Looks like the remaining Avengers are gonna be having some feels for a while.

Well, here's one solution for the problem:

I bet Tony Stark could throw something like that together.

Oh, Cap. Someone grab him a tissue!

And that poor Property Brother!

Without further ado, here's the flood of other 'post-snap' scenarios:

We've all got coping methods.

Yeah, that sounds about right. Self-care is so important!

So who's left to direct more "Avengers" films?

At least the MCU still has one.

Even popular eateries will never be the same.

Look at it this way:

Yup. They've still got a majority!

It's all about the numbers.

The show must go on!

And these guys...did not beat the odds. Dang it, Thanos!

And then a trend started.

Looks like one member had a "view to a kill."

Or maybe two members? How many bandmates constitute one "Duran"?

Do the math on this one.

Is that how "ACDC" works?

Given all the Thanos-related carnage, I guess the remaining band members will be 'back in black' for their shows.

Wouldn't it be "He Might Be A Giant?" Or does proper grammar not really work here?

So, if we just had one Rolling Stone...

Thanos snaps, and Keith Richards just stands there and goes "Nah" when his body tries to dissolve.

Cap just seems very sad in all this.

Which is fair. But is any other Avenger feeling the sadness yet?

Maybe Cap is just big on the nostalgia.

Same, TBH. I'm pretty sure the whole crowd would be kinda feeling some emotions during shows post-snap.

That one Backstreet Boy. Looks like they definitely didn't beat the odds.

They're the last kids standing. Good on them!

Some people just took the whole thing a little hard.

Think we'll see any of this in "Endgame"?

Sure, they'll probably focus a little more on their 'defeat Thanos' problem. But we can take another few minutes of screentime for the little problems, right? How hilarious are these Endgame theories? Share this story with the Marvel fans you know!