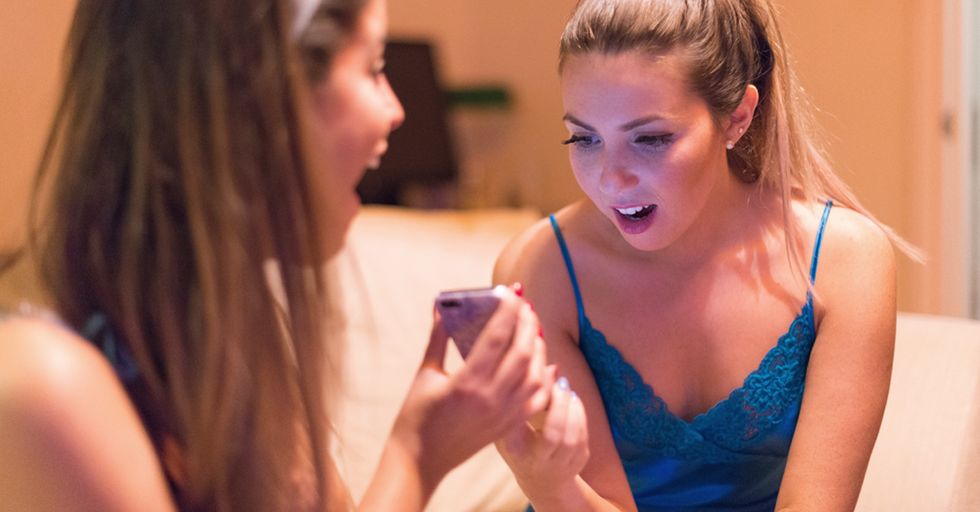 Dating in the digital age poses a unique set of challenges. The apps designed to help us find love are basically sexual harassment roulette. Sure, texting is practical, but it also makes annoying gestures like last minute cancellations, ghosting, and getting left on "read" all too common. Social media is all fun and games until someone slides in your DM’s with a little too much familiarity — or worse,  a dick pic.

It’s not news that the Internet is a place where all too many people (mostly men) are comfortable sending deeply inappropriate messages from behind the privacy curtain of a screen. And like a lot of instances of harassment, most of the time they get away with it too.

SheRatesDogs is the new hot spot for sharing and shaming the ridiculously disrespectful messages sent across the web. Because if we have to suffer through these, we may as well get to laugh at them too.

The college-student-run pet project that became one of the cutest accounts on Twitter.

People submit dog pics and the account rates them, with a little absurdist humor mixed in for good measure.

But it’s a different kind of “dog."

Because these guys can be real, well, dogs.

People submit screenshots from all over the Internet.

And SheRatesDogs puts them on blast.

As her bio explains, "it’s like WeRateDogs except the dogs are your exes." Spoiler: they’re all negative ratings.

At first people were a little confused.

The popularity of its pupper predecessor made for some pretty cute crossovers.

But things picked up quickly.

The account reached a whopping 1000 followers in its first hour.

The account went viral just days after it was created…

I highly recommend that everyone takes a look at @SheRatesDogs to see some situations that too many women know much too well.
— Whitney🌙 (@Whitney🌙)1546562704.0

…proving that these awful texts are really an epidemic.

At least on SheRatesDogs we can laugh about them together.

Like this guy, who really should have just said nothing at all.

Or this guy, who is a literal monster.

I’ve seen a lot but this is uncharted territory even for me... Blocked on everything else so he reached out with NE… https://t.co/V2lJAyNGep
— SheRatesDogs (@SheRatesDogs)1546713610.0

What part of blocked don't you understand?

When guys talk like this you literally need to run like change your number and block him this needs to be shut down… https://t.co/0da36ABQXG
— SheRatesDogs (@SheRatesDogs)1544984545.0

Calling this guy a dog is an insult to dogs.

Because, bye. Also, of course, this was sent on Snapchat.

There are just. So. Many.

But SheRatesDogs helps us laugh about it all. Because when you’re laughing you can’t cry about how terrible the options are out here!

Is this supposed to be romantic?

Because it’s not. It’s sociopathic.

Was this supposed to work?

Sorry dude. Not even if it meant you actually would "literally die."

The account is as hilarious as it is terrifying.

Yikes. Being self aware about abuse doesn’t excuse it dude!

Unfortunately, there are a lot of bad exes out there.

But maybe this message was worth it for “I hope your juul shorts out." Maybe.

Because a guy doesn’t even have to be your ex to treat you like garbage, even strangers will do it! Even (especially) self-proclaimed “nice guys."

Really, no misbehaving man is safe.

Obv SheRatesDogs is hilarious, but the account also has a mission.

The messages are degrading at best, violent at worst, and most often directed at women. Reading them alone could be humiliating and scary, but getting to share your pain with the internet is a time-honored coping mechanism.

The account wants to bring awareness to this dark underbelly of invisible harassment.

This is a MAN saying this. Because this account only makes boys fragile when they see THEMSELVES in my posts. More… https://t.co/IJE1p9ydZM
— SheRatesDogs (@SheRatesDogs)1548380071.0

And people of all genders appreciate both the laughs and the dialogue she’s starting.

Almost everyone’s gotten a disrespectful or even scary text from an ex or online troll, and SheRatesDogs is bringing this monsters into the light.

It’s also making an impact in the world of fashion, apparently.

Huh, now why does that sound familiar?

Ultimately, SheRatesDogs just wants us all to live our best lives.

Because you can’t teach an old dog not to send “You up?" texts at 2 am.

Even though some people are still having a hard time with the transition.

I mean sure, we’ll take some cute dog pics as a palate cleanser every once in a while.

You can still get a healthy dose of dogs on Instagram.

The first post was only a little over a month ago, but the account already has over 124,000 followers.

I mean, at least she’ll never run out of content.

For better or for worse.