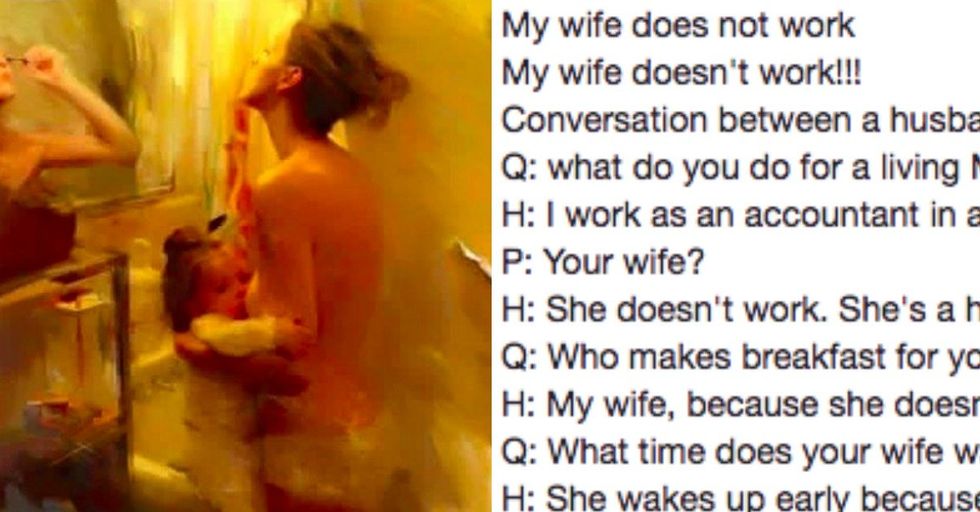 This Honest Post About Stay-at-Home Moms Has Been 'Liked' More Than 600,000 Times

We've all heard the "what do you do all day?" stigma that stay-at-home moms often deal with, at least in comparison to those who work outside the home.

It's alarming how many people think that stay-at-home parents (moms AND dads) live a stress-free life of unemployment and luxury.

In fact, it's doubly bad for them as they seek to fight stereotyping from both chauvinists and feminists. The two parties attack them for different reasons but are equally vicious.

Ask any stay-at-home mom and they'll tell you that their days are no picnic.

Not only is the work of running a household and raising one or more children exhausting, but being removed from adults of any kind for full days can take a toll on the psyche.

Tired of having to defend herself, Ryshell Castleberry, a Florida-based tattoo artist, wrote a Facebook tribute to stay-at-home moms that has been shared more than 300,000 times.

Ready to see a fierce mom clap back in a truly eloquent fashion?

It's clear from the message she posted, continuing onto the next page, that she isn't just speaking for herself or her kids. She's speaking for women and stay-at-home parents everywhere

It starts with an imagined conversation between a psychologist and a husband complaining about how his "wife does not work," before going on to list all the tasks she completes in a day.

See how it continues on the next page, as well as the insane reactions she got from people on all sides of the argument.

She's just getting warmed up.

Regardless of where you stand, it's hard not to admire her conviction.

She lists out a LOT of chores that we might otherwise gloss over.

You want job responsibilities? She's not shy about listing those either.

She brings it right back to the issue.

The post has more than half a million reactions, with many people praising her for speaking out against the stigma.

Some people were painfully blunt...and clear.

Any notions of "glamour" were quickly dismissed.

While others perceived the post as an insult to working mothers.

You didn't find many people disagreeing with her statements.

And why would you?

Castleberry went on to defend her post by writing that anyone, whether a working mom or working dad, should be able to "read the message and replace the words with words that fit their situation." To her, it was more about recognizing the effort of people who are too often under appreciated. So what do you think? Did she nail it or is she being a mommy martyr?