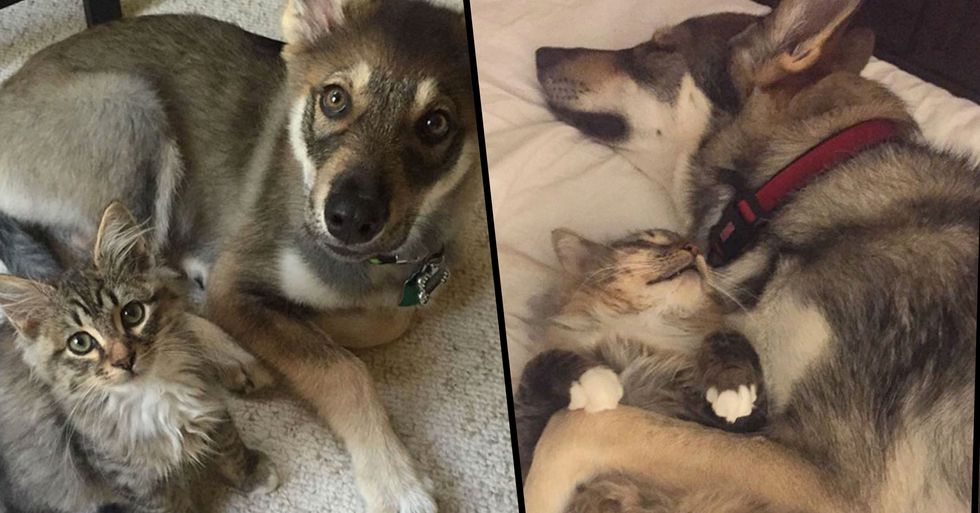 It's no secret that cats and dogs have a love-hate relationship, with their natural instincts making for rather turbulent interactions. Their hilarious little fights often make for some great internet content so when it comes to viral-worthy animal antics - they truly reign supreme.

But, they can actually get along. In some cases form an unlikely yet unbreakable bond, and this was certainly the case with this story.

Keep scrolling to find out what happened when one owner took her dog to a shelter to pick out a friend.

Dogs and cats have a complicated relationship.

Their natural instincts often mean interactions are quite antagonistic.

Their turbulent relationship has even inspired the phrase "fight like cats and dogs."

Either-way, their interactions tend to make for great content for the internet.

Whether it's a viral video or hilarious gif, these 2 furry foes really do rule the internet.

But they can get along...

Despite the stereotypes, some cats and dogs have defied the odds and forged unlikely bonds with each other.

They never fail to tug on the internet's heartstrings...

And that was certainly the case with this story.

A big day out for a certain Husky started by being taken to the shelter.

A husky named Raven was taken to a shelter in Texas to pick up her own partner in crime.

Ravens owner, Christina, always wanted a cat and dog but wanted them to grow up together.

Christina wanted them to get along.

She thought it best to let Raven decide who she wanted to live with.

It was Christina's "life goal."

She explains, "I wanted her to actually meet the cat and have the cat get along with the dog as well."

There were 4 lucky kittens to choose from.

When Raven got to the shelter, none of the kittens seemed to be interested in the pup.

Except for 1 little kitten.

The kitten - called Woodhouse, was smitten with Raven the moment she met her.

The pair have been inseparable ever since.

This just made our hearts exploded.

Owner Christina says "They're still always together, always playing together."

The pair even celebrate each other's birthdays...

They absolutely love a good cuddle...

And they clearly love taking naps together.

They are always around each other.

There's no doubt that there is a lot of love between the 2. Who said dogs and cats can't be friends?

It looks like this pair will be together forever.

If these pictures are melting your heart, and you're wondering why you haven't adopted already, get down to your local shelter. I know I will be.

And just when you thought dogs couldn't get any cuter.

Usually, nothing could beat a story about the friendship between a cat and a dog. However, this next story just might top it. Keep scrolling for some adorable guide dog content. You won't regret it.