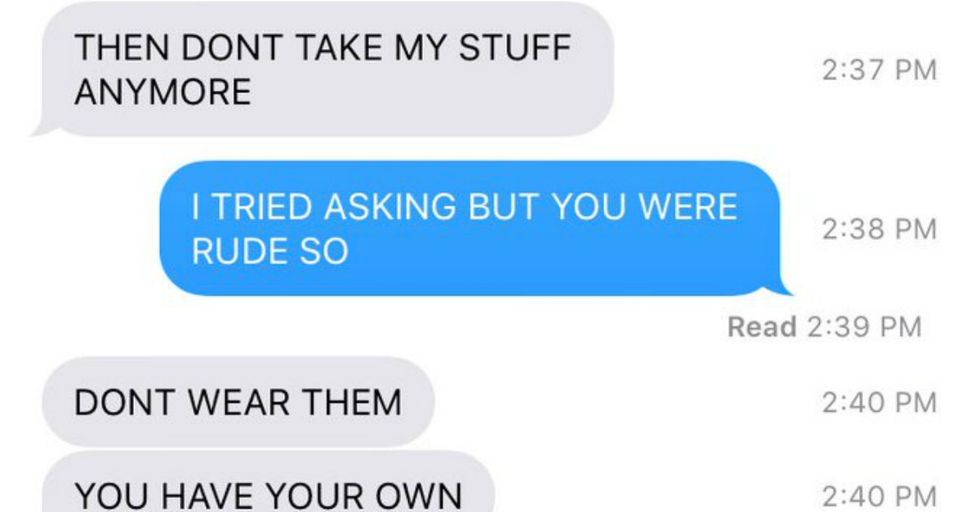 No matter who you are or where you come from, family life is usually complicated. Be it big or small, happy or contentious, keeping a family functioning smoothly and happily is no easy feat. It also doesn't help that living in close quarters, day after day, with the people we love tends to bring out our grouchier sides.

Thankfully, we have love, affection, and loyalty to fill in all the rough patches and keep our bonds strong.

This is especially true when it comes to the ridiculously complicated relationships between siblings. They're the "friends" we can't help loving and hating — all at the same time. No one is a better example of this than two sisters who are currently trending on social media for their "frenemy" text exchange.

It's a fact that no two families are exactly the same.

Families come in all shapes and sizes, so just when you think you've met every type there is, a new one usually comes along to surprise you. From single parents to couples who've been together since high school, the dynamics vary greatly, as does the amount of children running through the house.

But most families do have one thing in common.

There are definitely exceptions, but for the most part, what often knits a family unit together is love. It's hard to put that particular bond into words, but it's there, and we cherish it. Each member has a place in our hearts, and we do anything we can to help keep them safe and happy. They're our crew.

But that doesn't mean it's always easy.

To put it mildly, family life can be a bit challenging. Something about seeing the same people, day in and day out, tends to bring out the crankiness in even the most patient people. It also doesn't help that we often live together, and as is the case for a lot of siblings, even share a bedroom.

There's the classic struggle for parents.

The struggle to stay sane is all too real for parents sharing a home with their offspring. Living in a box while little people follow you around asking for things is a true test of patience, and a great opportunity to refine that skill. But in the end, it's worth it — because there's nothing like family bonds.

And then there's sibling rivalry.

Directly related to the parenting struggle is the tension that often springs up between brothers and sisters. And it's no wonder. There's no one easier to fight with than the sibling who's always there, eating with you, sharing the TV, and determined to get the best seat in the car. Competition is the name of the game, and it's one that gets played out, over and over.

A subset of sibling rivalry is "sister rivalry."

While brothers certainly have their own dynamic, there's something innate about many sister relationships that's downright complicated. Whether you have one sister or five, it's very possible that you're best friends and enemies, all at the same time. It's easy to pick on your own sister. But if someone else tries to do it? Hold these earrings, because it's gonna get ugly.

No one knows the challenge of living together like the two sisters who've recently gone viral.

It all started when Twitter user, @cinnimxntxast, posted this back and forth message she'd recently had with her sister. It's a perfect study in what it's like to have a female sibling, mainly because it shows the two extremes of emotion it's possible to feel at the same time. Just as quickly as fight can start, it can end with the right choice of words and possibly a movie.

The post struck a chord with a lot of siblings.

The sister's post was so relatable, it inspired other social media users to share their own stories about being a sister. Like the original poster, this one by Twitter user, @HastingsJenna10, is a great example of how a squabble can break out quickly over something silly, like a jacket, but be resolved in a minute or so.

Another Twitter user, @Kyleebranstette, volunteered her own sibling exchange, which is laugh-out-loud funny. Fights over clothes, makeup, and hair products may tend to dominate sisterly disagreements, but many times, simple miscommunication can be the culprit as well.

And, sometimes, sisters straight up get the cold shoulder.

Sisterly squabbles are one thing, but, as Twitter user @lexablickenyo proves, those spats occasionally devolve into the silent treatment. Or getting blocked on social media, as it were. It's not totally clear why she got blocked, but we're hoping whatever it is falls into the "sisters have their own ways of working things out" category.

If there's any lesson to be learned from the epic thread, it's that sisterly affection and fighting is a universal phenomenon few people can avoid. Unless they only have brothers. Or they're only children. But still, sisters should take comfort in the fact that they're not alone and enjoy all the joy and craziness that comes with having a built-in frenemy for life.