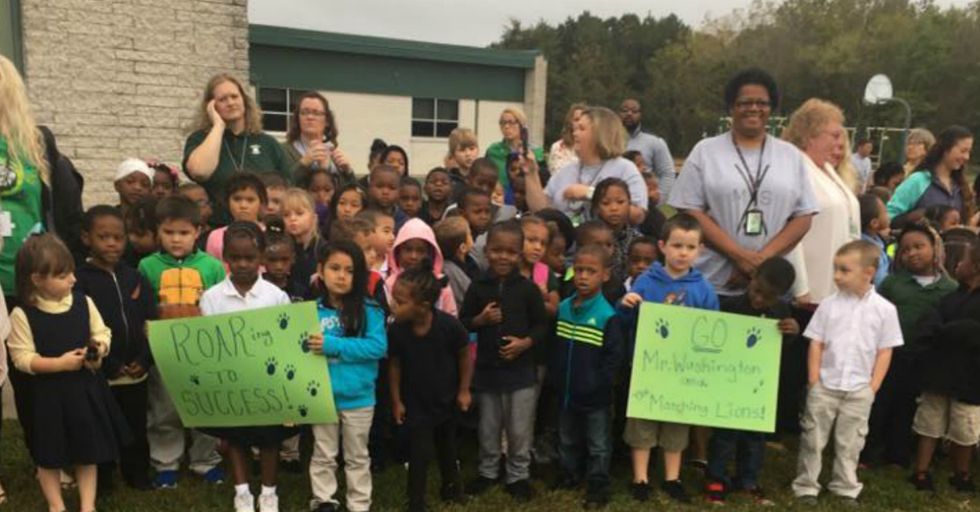 When he started as a substitute teacher two years ago at Maple Elementary School in Cambridge, Maryland, Ray Washington thought it was just a temporary gig. But then he started to build real a connection with the children.

After the school hired Washington permanently, he started building a marching band for his fourth and fifth graders. In the year since, he's taken his students to previously unreached heights.

Heights that have everyone talking — including ABC News.

Washington actually went to Maple Elementary when he was a child. That was where he discovered his love of music and first learned how to play drums, a practice he continued at his alma mater, Morgan State University.

Once he was offered the job at Maple, he was quick to bring his love of drums to his students. He created a drumline called the Maple Elementary Marching Lions. "We started with getting uniforms and everything, and it led to what it is now," Washington said. "This year, everything is all together and we’re just trying to blow everything out the water."

By starting the drumline, Washington has given the students a chance to foster new talents. But this chance comes with a caveat. “They know they have to keep up good behavior and good grades to stay in band," he says.

This is particularly important because not all of Washington's students are privileged. He explains, “Some of them have some really rough home lives, and this is their outlet. This is what they look forward to. I’m not just a band teacher. I’m a counselor, a father, a friend. It takes so much more to get through to them. The whole school system is so supportive of it."

Washington cares deeply for his students, and it shows. And they love him so much, they nominated him for the "Teachers Who Make A Difference" award. It's the first award of its kind from ABC affiliate WMDT.

It's not every day a teacher cares so deeply for his students, or changes their lives. Washington's efforts caught the attention of Good Morning America. He and his drumline were recently featured on the program, an opportunity which made Washington very happy. "For me, to be able to give that [the opportunity to be on Good Morning America] to them, that’s major," he said.