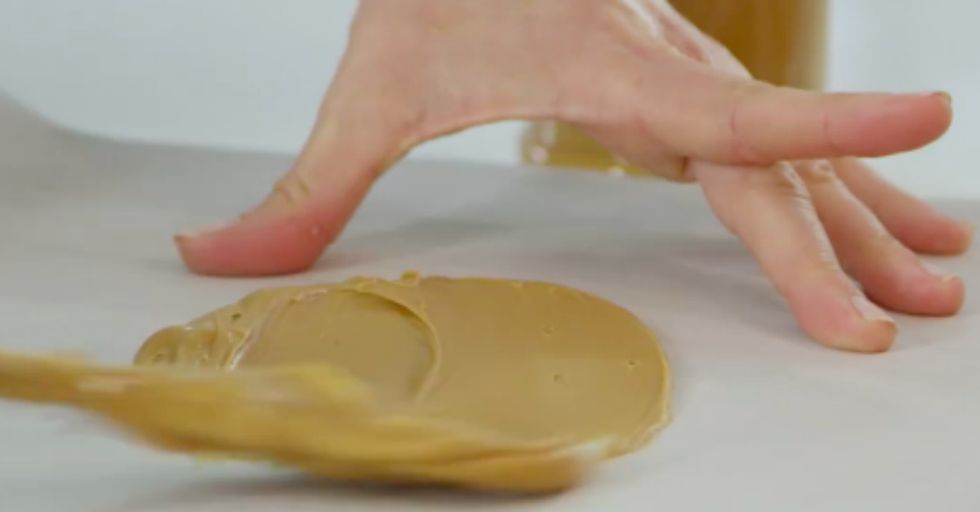 Peanut butter and jelly sandwiches are pretty much an entire food group when you're a little kid. Chances are if you were blindfolded and stuck in front of an equipped kitchen counter right now, you could make a PB&J with your eyes closed.

So why did food blogger Bev Weidner (who goes by Bev Cooks) try to reinvent the most classic meal in the universe?

We don't know. What we do know is that the Internet is never going to let her live it down.

Her website is gorgeous and her food photos are mouthwatering, so it's a shame that now she will only be remembered for her ridiculous peanut butter "hack" that you never in a million years needed or wished for.

In this video for the Food Network's Facebook page, Weidner describes the unholy hack called "Peanut Butter Slices." Watch, if you dare:

Basically, instead of spreading peanut butter on bread (because it rips! It tears! Poor soft bread can't handle the violence of something so soft the word butter is actually in its name!), Weidner scoops gobs of the good stuff onto parchment paper. Then, she evidently scours the back of her cabinets for her rolling pin (seriously, where is my rolling pin?), folds the paper to cover the top of the peanut butter, and rolls it out to a flat rectangle. Next, she puts the evil peanut butter rectangle into her empty freezer — it must be empty if you're laying this giant PB sheet flat in it — and waits until the next day. After the rooster cock-a-doodle-doo's and her kids no longer want peanut butter sandwiches, she removes the rectangle from the freezer, cuts the peanut butter into bread-sized squares, peels off the parchment paper, and slaps it on a sandwich. It's bonkers.

The video has been viewed over 6.5 million times. The vast majority of people in the comments were just as baffled by this "brilliant hack" as the rest of us.

"I add PB to bread like a normal person" was pretty much the rallying cry of the entire Internet after they saw this video.

Weidner's "hack" is just... so much work. It's so remarkably unnecessary.

It creates all this hassle to achieve something so simple. There's no way you just glide that giant peanut butter frisbee into your freezer to lie flat. First, you have to spend twenty minutes maneuvering the popsicles and the chicken nuggets and throwing away that open bag of freezer-burned spinach that's been there since 1996. Not worth it.

The Internet's response to this silly video was a collective head shake.

This guy jokingly said they should post a "recipe" for ice cubes next, but joke's on him: This is a recipe for ice cubes! Iced cubes of peanut butter! Honestly, we don't even want to know what Bev Cooks does with the jelly.