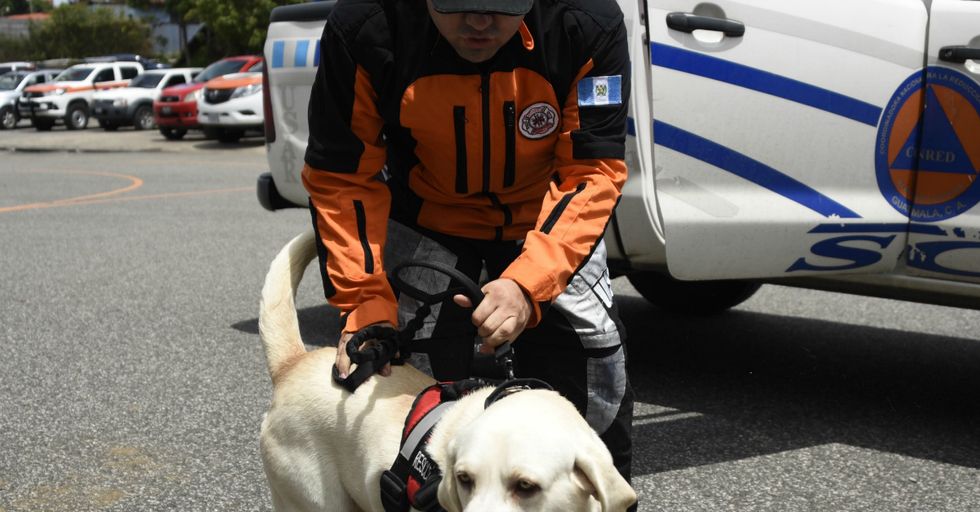 A Twitter account called WeRateDogs™ posted a photo on September 20 that broke the Internet... in the best way possible. The now-viral photo has been liked over 68,000 times and received over 19,000 retweets.

So what makes this dog photo stand out from the billions of others on the Internet? You'll have to see it for yourself to understand.

Not only are dogs magical fluff balls that fill our lives with love, but they can also be hardworking members of society with real jobs!

Companion animals are trained to provide a number of different services, including helping the seeing impaired, providing emotional support to those suffering from PTSD, and even helping those with epilepsy during a seizure, to name a few.

Their calming and comforting presence has been shown to improve mental health.

Not only do service animals help those in need during their daily lives, they also become a valued member of their families.

Another group of working pups are those trained to assist police officers and other members of law enforcement.

Dogs have fought in wars alongside humans for centuries.

Military working dogs have been used to fight the enemy, relay messages, track and detect dangerous explosives and warn of an enemy's impending attack.

So when we first heard about a dog-rating Twitter account posting a photo of a working dog, we figured it would be cute, but nothing we hadn't seen before.

Boy, were we wrong. The heroic pup has a very important job to do, and when you see her in uniform you might just lose your mind from the absolute cuteness overload. You've been warned. Are you sure you're ready to see her? Positive? Okay, we'll show you...

Meet six-year-old Frida, a valued member of the Mexican Navy.

We know, we know. The goggles. The BOOTIES. The serious look of determination. She takes her job SO seriously.

As the caption to the photo states, this good girl is a member of the Search and Rescue team.

Due to the two devastating earthquakes that ripped through Mexico in September, Frida has had her work cut out for her. Buildings have been toppled and hundreds of people have been killed.

Thanks to the efforts of pups such as Frida, countless people have been saved and bodies have been identified.

If anyone deserves a quick nap and a treat, it's Frida. She and her canine colleagues have been working tireless to aid the Mexican Navy in their rescue efforts.

Here's a pic of Frida with fellow K-9's Eco and Evil.

These dogs are the definition of heroes. It's been reported that Frida has already saved 52 people in her lifetime, 12 of these from the recent earthquakes alone. All three pups deserve endless treats and belly rubs.

The response to the photo has been insane.

Many Twitter users posted similar shots of dogs at work. This pup, named Titan, has reportedly saved a whopping 22 people. Titan is a seriously good boy. But that's not all...

People have been losing their minds over the adorable photo.

But it's also helped to bring awareness to these unsung heroes, and what an asset their services can be during crises.

One user even drew this adorably epic photo of the courageous canine.

And we thought dogs couldn't be any more amazing. If you have to be rescued during a tragedy like this, being saved by a hero dog would be the best possible scenario. But to Frida, it's all just part of the job.