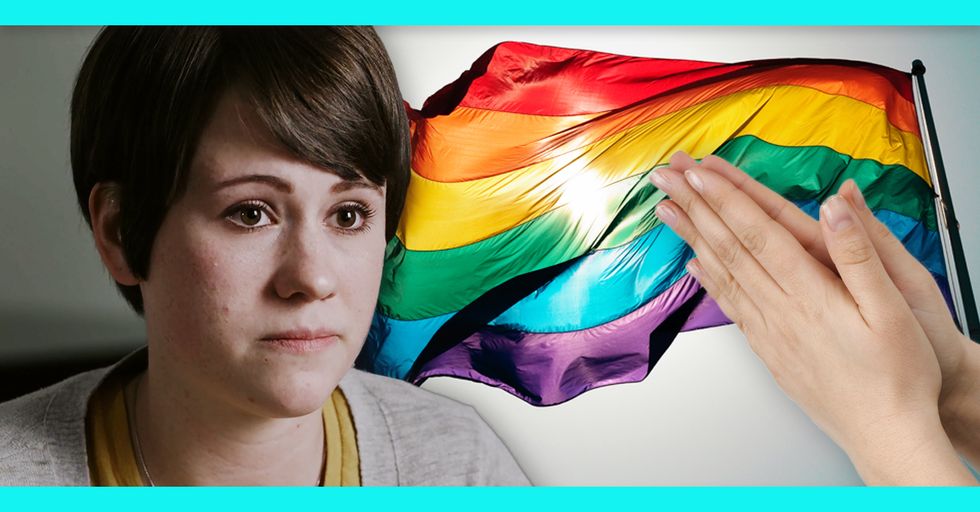 The video starts like a regular social media video targeted towards the millennial and Gen Z set. Young people, hair flowing slowmotion to EDM enact a series of vignettes: Drinking at an outdoor pool party at sunset. Frolicking down a quiet street. Dancing together at sunset.

It all seems innocent, fun, and so does the narrator, Emily Thomes.

In the video, deceivingly titled Love is Love,  Thomes talks about falling in love with a girl at fifteen to the dismay of her parents.
"Love is not necessarily between a man and woman, the problem was backwards thinking," she states early on, then explaining how she went on to have more relationships with women despite her family's censure.
If, by now, you think the video we're discussing is one in support of the LGBTQ community, you'd be forgiven for the mistake.

After all, the video is designed to trick its viewers with its glitzy visuals, co-opted title (the phrase "love is love" is often used to encourage acceptance of LGBTQ relationships), and even the rainbow flag splashed across its thumbnail. But it's not.
Far from being accepting of homosexual relationships, the Love is Love video, which has gone viral to the tune of 1.5 million views, is in fact an assault on the LGBTQ community and an insidious advertisement of the idea of "praying the gay away."

@anchorednorth @YouTube What a monstrous message you offer. You can't pray sexuality away, but you CAN gaslight str… https://t.co/hATjTquHXW
— bookworm (@bookworm)1515105148.0

In the video, Thomes explains that she first went to a bible study at 22, whereupon she experienced the epiphany that her same sex attraction was sinful. Of course, she doesn't say so in such terms, and is careful to say things like "that’s why Jesus had to come. You feeling a desire for sin just proves you need grace like me."
Thomes' words and the video itself are not only distasteful, they are downright dangerous. Conversion therapy, the idea that you can change sexual orientation via prayer has not only been discredited by all credible mental health associations,  the American Psychological Association states that it often has "serious potential to harm young people."
While Thomes and Anchored North, the California-based charity that created the video spout such airy euphemisms as "you are washed, you are sanctified," LGBTQ teens are almost five times more likely to have attempted suicide than their heterosexual counterparts.
Yes, we finally have gay marriage in America, but the LGBTQ community is still one of the most reviled and marginalized communities in the country, which means videos such as these have harmful, lasting effects on the most vulnerable portions of our population.

As Brandan Robertson, a queer Christian writer and pastor, told HuffPost via email,

A more robust, Christ-centered Christian theology would lead us to understand that God is all gracious, all merciful, and extends forgiveness and love to absolutely everyone. God has created a vast array of human beings, not one of which is identical to another. And in our diversity ― including diversity of sexuality and gender identity ― God’s glory is revealed.