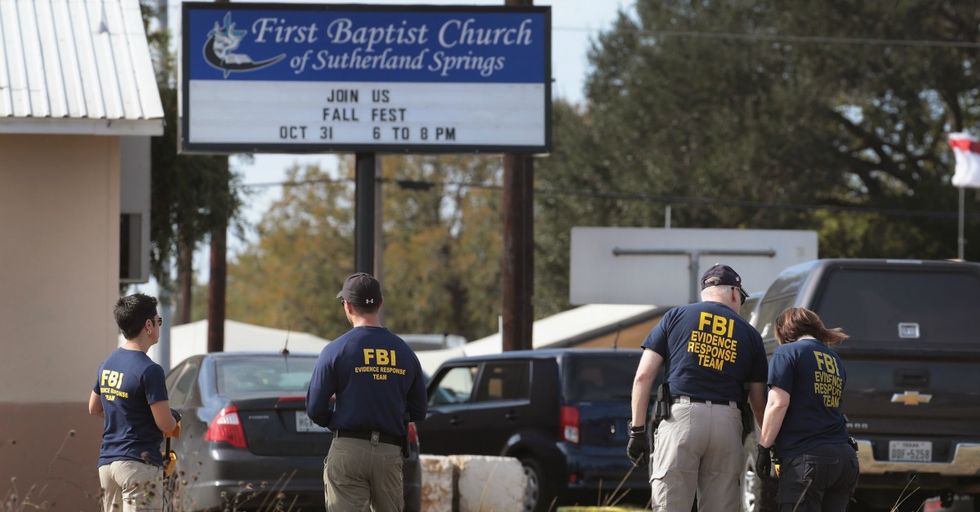 This Is Everything We Know About the Texas Church Shooter

Sutherland Springs, Texas, is a quiet town. Just 30 miles east of San Antonio, the tiny unincorporated community has about 600 residents. On Sunday, some 4 percent of them died when a gunman in black tactical gear entered First Baptist Church with a Ruger AR-556, a variation of the AR-15 rifle that has been used to devastating effect by mass shooters.

Kelley was a former airman with the United States Air Force. Like many mass shooters, he had a history of domestic violence and was court-martialed in 2012 for assault against both his wife and child. Don Christensen, a retired colonel who was the chief prosecutor for the Air Force explained, “He assaulted his stepson severely enough that he fractured his skull, and he also assaulted his wife. He pled to intentionally doing it." Kelley received 12 months confinement and was demoted in rank. He had a "bad conduct" discharge two years later.

Kelley should not have been able to purchase a gun.

Both assault and domestic violence are charges that preclude gun ownership. What's more, Kelley was denied a Texas gun license, and yet he somehow managed to buy his rifle in 2016. Two handguns were also found in his car. “So how was it that he was able to get a gun? By all the facts that we seem to know, he was not supposed to have access to a gun," Texas governor Greg Abbott told CNN’s Chris Cuomo. “So how did this happen?"

Kelley may have been targeting his mother-in-law, according to Freeman Martin, a spokesman for the Texas Department of Public Safety.

Martin spoke during a news conference Monday morning. “The suspect’s mother-in-law attended this church," Martin said. “We know that he had made threatening texts and we can’t go into detail into that domestic situation that is continuing to be vetted and thoroughly investigated."

“This was not racially motivated, it wasn’t over religious beliefs, it was a domestic situation going on."

Kelley's in-laws weren't present at the church when the shooting began.

This "domestic situation" led to the deaths of 26 people, with an additional 20 people injured.

More deaths are expected. The victims included the 14-year-old pastor's daughter Annabelle Renee Pomeroy, whose parents were out of town when the shooting happened, as well as the visiting pastor, three generations of one family, a pregnant woman and three of her children. As many as 14 children died during the shooting, making it one of the deadliest ever for children.

"You've got your pews on either side," Tackitt said. "He just walked down the center aisle, turned around and my understanding was shooting on his way back out." Tackitt also added that there was "no way" churchgoers could escape once the shooting started. “Wherever you walked in the church, there was death," Tackitt said.

Kelley was eventually brought down by a pair of bystanders.

An unnamed neighbor who heard the gunshots grabbed his rifle and shot Kelley as he exited the church. Kelley managed to get to his car and flee the scene. He reportedly called his father and told him "I'm not going to make it." The neighbor flagged down a bystander, Johnnie Langendorff, and both men drove after Kelley at 95 miles per hour. Kelley eventually veered off the road and crashed about six miles from the church. He was later found dead from a self-inflicted gunshot.

"Fortunately somebody else had a gun that was shooting in the opposite direction" -@POTUS on Texas church shooting https://t.co/75FEEDKqSx
— USA #MAGA 🇺🇸 (@USA #MAGA 🇺🇸)1509950441.0

At a news conference in Tokyo, Donald Trump said "This isn't a guns situation," in reply to a question about gun control. "This is a mental health problem at the highest level. It's a very, very sad event. A very, very sad event, but that's the way I view it." It is important to note that two of the deadliest mass shootings in United States history just happened within 35 days of each other. At this point, maybe we should start asking ourselves some difficult questions, like why toddlers can have guns and why a "domestic situation" can end in the deaths of 26 people.